So the latest 2019 new home customer satisfaction survey results have finally been published by the Home Builders Federation (HBF) – six months after the survey year ended on 30 September 2018. All HBF housebuilder members having known their current star rating and individual survey scores as they come in throughout the year via the NHBC portal.  Taylor Wimpey and Bovis even crowed about their “achievement” in their annual reports last month. Persimmon has (again) pledged to improve its five year run of 3 star ratings, by announcing its 1.5% homebuyer retention last week.

But do the general public take note of the housebuilder star ratings? 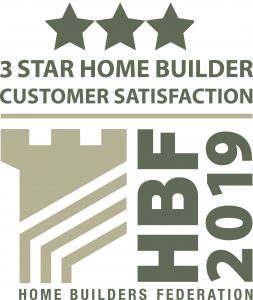 Apparently not. On the face of it 16,449 still bought a Persimmon new home in 2018 despite its continuously poor star rating, with just 8,234 of these returning the survey! Amazingly, 7,404 buyers bought their new home from Bovis despite the builder being rated an industry low of just 2 stars in both 2016 and 2017.

So why is this survey so important for the industry?

For a start it is the ONLY survey of new home buyers “satisfaction”. Even if this is an in-house survey, controlled by the industry with carefully crafted questions and sent to new homebuyers just 8-weeks after moving in, it is all there is. The HBF and its PR machine goes into overdrive, making crass overstatements with headlines such as “Homeowner satisfaction with new build homes increasing”
“more people happy with their new homes than ever” “new homes are built to a higher standard than ever before”  when the reality is, this is a small increase over two years, from an all time low in 2017 (84%) and way below the all time peak of 91% in 2013 – results from the year before Help to Buy was launched!

“The improvement in satisfaction levels have been achieved as output has continued to increase.”
That is according to the HBF, who were apparently oblivious to the weak mortar issue in Britain’s crumbling new homes! 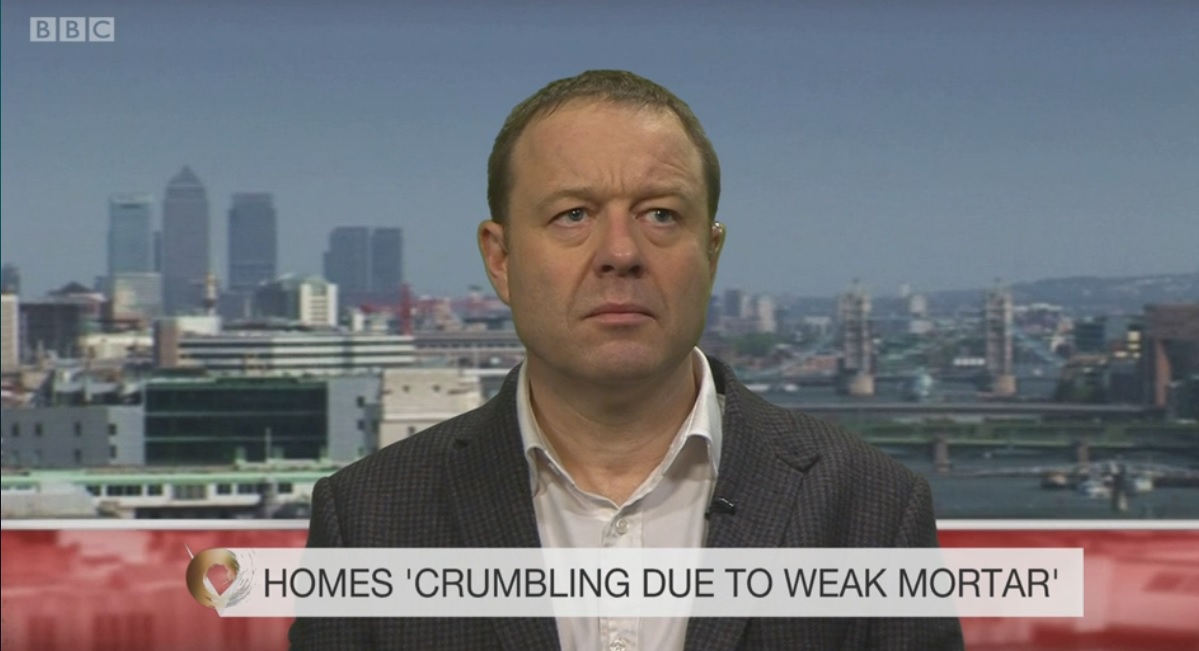 The HBF have stated that the primary purpose of this 8-week satisfaction survey is to “provide data to rebut negativity” What other industry at the outset, designs a survey so it can rebut negativity? Surely the sole purpose of any customer survey should be to indicate unknown areas of weakness so these can be demonstrably positively addressed. Not the HBF survey, where the HBF crows: “two thirds of those polled said the number of defects was in line with their expectations” 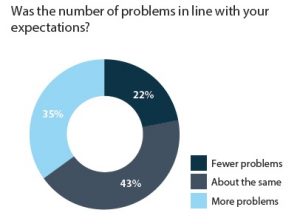 Actually it was 43%, with another 34% indicating more “problems” than they expected. Again, in what other industry do consumers buy a product in the full and certain knowledge and expectation that it will be faulty? 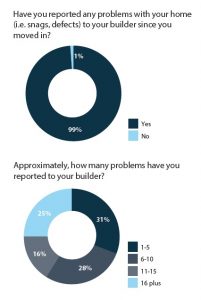 One survey response the HBF never care to highlight, one that cannot be easily influenced, is the indisputable fact that virtually all new homes have defects, with 99% of buyers surveyed reporting defects to their builder within a few weeks of moving in, and an increase this year to 42% reporting more than 10 defects! The HBF spins it “new homes are complex bespoke products and the number of problems (snags, usually minor such as paint drips, cupboard doors out of line etc) was in line with buyer’s [low] expectations” and “58% having less than 11 issues with their new home” Cigars all round, break out the champagne!

Well not quite. The Government has announced it is proposing to get tough on housebuilders that fail to deliver good quality and service. 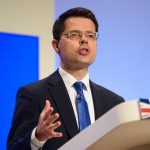 But whether James Brokenshire who spoke at the HBF Annual Conference and would do well to distance himself from this broken industry, is daft enough to use the industry’s star rating as his yardstick remains to be seen! Government need to take a much tougher stance against the industry wolves dressed in Granny’s nighties (covering up everything) and avoid being taken in like Little Red Riding Hood, by their meaningless pledges, promises and plastic PR spin.

New cars are also “complex bespoke products”, some models have around 1,000 different customer options yet they are routinely, delivered to the customer defect-free having been inspected many times, both during and after manufacture. Those collecting the keys of a new car would be horrified to discover “misaligned doors and paint drips” defects which the HBF attempts to state as “usually minor” but nevertheless, are not inspected, checked or eliminated, being left for the customer to discover by the profit-driven industry the HBF serves and promotes.

So its congratulations to Russell Armer Homes awarded a 5-star rating, this from only 20 of their customer’s survey responses! No doubt contributing to:  “This year’s further improvement is a clear demonstration that the intense focus within the industry on build quality..” so spins the HBF. It is interesting to note the percentage “sample size” of buyers returning the survey/answering Q1 for the main plc housebuilder has fallen dramatically this year to an average of around 44% of total homes built. The stated ‘sample size’ for each housebuilder totals 48,001, this despite 60,955 surveys being returned. Perhaps many of those dissatisfied buyers, badgered and threatened by housebuidler’s to complete the survey form favourably, believed they would hurt the housebuilder more by not doing so, rather than completing to survey to reflect their discontent.
Some new homebuyers do not even get the survey. SM said on the Unhappy New Homebuyers Facebook Group
“I never got a questionnaire for a survey. Wonder how they were selected. I did have great fun completing my 2nd NHBC survey about Persimmon though!” “Intense focus on build quality” HBF?
For those that do get notification codes from the NHBC, the survey can be completed online here But many new homeowners find out after they move in that broadband is painfully slow or in some cases, non-existent.

In 2016 I asked the HBF why the total number of surveys “sampled” for the Star Rating was less than the number of surveys returned?  This year it was 78% of the total. It would seem that more and more surveys are being sampled out! Why there is a need to sample at all? Surely all the surveys responses can be counted?
The HBF responded:

“The industry scores are based on every single valid response NHBC (who operate the survey) get to what is an industry-wide survey. Valid simply means completed by an owner occupier within the 20 week response window. Not one single valid survey was ‘not used’. So all the industry scores shown in the charts on the website in the results we released are based on every single (45,342) valid response we got this year.  Whilst the ‘industry survey’ covers more than HBF members, the Star Rating part of it is just for HBF members. Hence adding up the sample sizes for the Star Rated builders will not get you to the total 45,342 responses as other non-HBF members are sampled as we want to get as full a picture as possible.”

In 2011, I asked the HBF why it did not publish individual builder results for every question?
John Stewart HBF Director of Economic Affairs told me back in 2011:
“From a personal perspective, I think publishing more detailed company results would not have had any more impact on raising customer satisfaction among new home buyers. But it would most certainly have provided food for those who are prejudiced against the industry and simply seek to criticise. I see no value in this.”

No surprise there! The industry also keep the results of the NHBC 9-month survey under wraps too, no doubt for similar reasons. The NHBC told the an APPG Inquiry in 2015: “The NHBC 9-month customer satisfaction survey scores generally 5-10% LOWER than the HBF 8-week survey” 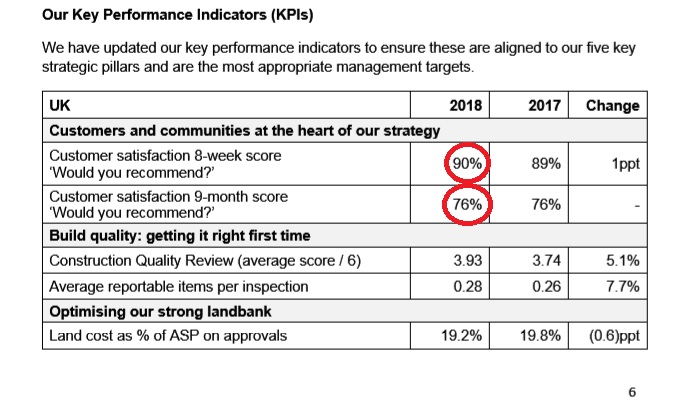 This year Taylor Wimpey indicated that its overall satisfaction star rating score at nine months was 76% – 3 star territory, 2 stars and 15% below their official 5-star rating.

The survey, and in particular the all important housebuilder star rating question, can be manipulated by housebuilders.  Often buyers tell me they were told their faults would not be fixed if they answered “No” to question 1 – “Would you recommend a friend?”

In the halcyon years of “customer satisfaction” 90% in 2012 and 91% in 2013 with the number of surveys returned were 23,778 and 29,330 respectively. The financial crisis was in 2008 and housebuilders reduced their production between 2009 and 2012. This was ramped up in 2013 when the taxpayer-funded Help to Buy gravy train was launched and plc housebuilders had pound signs in their eyes.

HBF chief Stewart Baseley who by his own admission is apparently  “a great believer in transparency” says:

“Achieving such high levels of customer satisfaction, whilst delivering the steepest increase in the rate of house building we have seen for 40 years, is a considerable achievement.”
“The survey proves conclusively that the people who buy and live in new build homes are overwhelmingly happy with their purchase. There has been a huge focus on quality and service across the industry and this is reflected by successive annual improvements across all question areas.
“The intense focus on quality and service, allied to a huge recruitment and training campaign has enabled builders to further raise standards whilst increasing output. New build buyers already have far more protection than second hand buyers with the security of a consumer code and ten year warranty.
“The vast majority of customers are already happy with the service and quality of their home, but the industry is determined to deliver even higher levels in the years to come. The industry is committed to further increases in protection and redress and is working with a range of stakeholders on how an ombudsman can be introduced.”

Quite how the likes of Mr Baseley sleep at night after saying those statements I don’t know! His HBF even have the nerve to use the creation of the statutory new homes ombudsman, (that I campaigned 5 years for) as a marketing tool “further enhance build quality and consumer protections for new home buyers.”  Build quality is at best poor and those buying a new home have no “consumer protections” at all as many thousands have discovered to their cost! This is precisely Why a statutory new homes ombudsman is being set up! The HBF must not be allowed any opportunity to weaken the new homes ombudsman powers and effectiveness.

The HBF has recently announced it is teaming up with charities to provide support and highlight mental health amongst construction workers, with 400 taking their own lives last year. A construction worker is now 10 times more likely to die through suicide than a fall from height! Many mental health issues originate from bullying and the unrealistic production demands by site managers, contracts managers and regional construction and managing directors, who in turn face similar from the main board directors in their pursuit of every increasing completion numbers and record profits for their dividend hungry shareholders. Those affected will no doubt be delighted by the Building Mental Health Framework and the £100,000 the whole housebuilding industry has donated to the charity and the 24/7 helpline! But the irony is, a great many new homebuyers suffer mental illness too, becoming drained as a result of engagement with indifferent housebuilders which for some, the mental anguish is unbearable as they try to cope with the daily frustration and dealing with plc housebuilders and their broken promises.