“Ridiculous” – “immoral” – “dog kennels” – “shoe boxes” – “rabbit hutches” These are just some of the words local residents have used to describe Britain’s micro homes – Government-endorsed “favelas in the sky.”

It would appear the Government is intent on cramming an ever increasing number of ‘hard working British people’ into ever smaller areas and living spaces. Evidence of this provided by the Housing White Paper, with its proposal to review the guidance on minimum sizes for new homes, despite the “nationally described space standard” only being in force since October 2015.

“The Government proposes to amend the National Planning Policy Framework to make it clear that plans and individual development proposals should:

We also want to make sure the standards do not rule out new approaches to meeting demand, building on the high quality compact living model of developers such as Pocket Homes ” 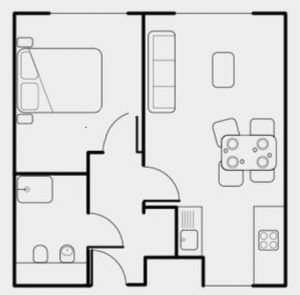 The pocket homes the government deem ‘high quality’ are little more than 38sqm – just one square metre larger than the government’s own minimum space standard for one person living in a one-bedroom flat. If two people live there, the minimum space is 50sq m so these new “homes” don’t meet the standard. But many micro homes are under half this size with floor areas often as little as 15sq m.

These ‘pick-pocket’ micro homes, potential slums of tomorrow, are allowed under ‘permitted development rights’ when in 2013, the government allowed office blocks to be converted for new homes without the need to go through the full planning process. As a result homes built in converted office blocks do not have to meet minimum floor areas or requirements for affordable housing.

These office block conversions could also be death traps in the event of a fire. The Building Regulations in England do not require sprinkler systems in residential buildings. Not even in multi-occupation timber-framed apartment blocks. It is inconceivable that these ex-office buildings would have floors capable of structurally supporting fire-resistant masonry partitions which are far more capable of preventing the spread of fire throughout a floor. 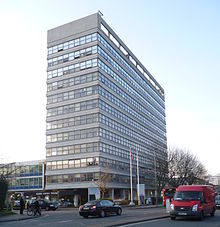 Official government housing supply figures for 2015/2016, released in November 2016, show 189,650 net additions to housing supply, with 30,600 coming from change of use from non-domestic to residential, 12,824 of those from conversions of former office blocks. No wonder the government is happy to back micro homes, it helps the figures look better! Nearly three-quarters of the stated growth in housing supply has come from these urban office block conversions. The HBF is also happy to include these in its propaganda “promoting awareness of increases in output and rebut negative claims on build quality”

So now in addition to buying poor quality, buyers have to be aware of buying teeny-weeny  new micro homes, “inspired by yacht design”, often as small as bedroom in a ‘normal’ new house – 4.2m x 3.87m (16sq m) and almost as small as the size of a single garage.

Where are these micro homes being “built”?

A development in Archway of eight flats in Jeremy Corbyn’s Islington North constituency, where two of the apartments were just 13.5sq m, was thankfully refused by the council but only because of “issues relating to previous use.” 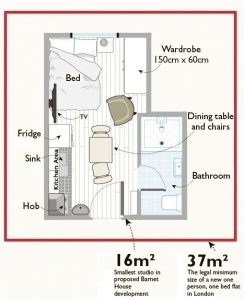 Meadow Residential plans to convert an 11-storey concrete block in Barnet into 254 “flats”. The main issue being, 96% of these will be below the 37sq m minimum space standard for a single person. Some of the “apartments” have floor areas of only 16sq m – 40% less than a 28sq m Travelodge room!
Conservative led Barnet council told The Times it could not prevent the scheme going ahead due to permitted development legislation, despite being of the opinion the “flats are not what we think are appropriate living spaces for our residents”. In this area similar sized studio flats sell for up to £180,000 and cost £800 per month to rent.

High house prices in London and south-east England are facilitating the conversion of more office blocks. A former American Airlines office block near Heathrow has been converted to provide 288 “flats”. An application was also lodged for converting Lewisham House in south east London into 230 new “homes.” The Independent reported on Pocket homes in Southall, Ealing that recently sold for £165,000. The latest development, in Brixton, has one-bedroom apartments from £248,500 and ‘boasts’ communal gardens and cycle storage!

It would appear that Croydon, is fast becoming a UK micro homes hotspot. In housing minister Gavin Barwell’s own constituency, Guardian Money found a studio “flat” in the centre of Croydon with a floor area of less than 15sq m. Others in Croydon “tracked down” by the Guardian, included a 14.9sq m flat in George Street and a 16sq m home in Barclay Road. Inspired Asset Management has developed hundreds of micro flats, many of them in Croydon. Unsurprisingly, Inspired told the Guardian it was “delighted” the government plans to review the space standards. A spokesman confirming that a one-bed flat has a typical floor area of 30sq m – 36sq m, whilst admitting it had built even smaller flats previously. They claim there is a strong demand for such property, having built 515 micro “apartments” since 2013 – 90% of which sold before completion.

The housebuilders’ lobby group Home Builders Federation [HBF] have persistently argued against minimum space standards for private housing, with spurious claims it reduces “customer choice” – “If you make a house bigger, it’s naturally going to be more expensive, so if you take away that choice by specifying a minimum size, you are by definition ruling out a section of the market on an affordability basis.” 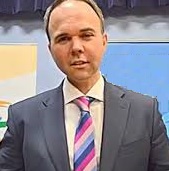 Housing minister, Gavin Barwell, voiced a similar opinion in a speech last autumn when he suggested it might not now be possible for young people to afford to buy a full-sized home, so builders should look to build ever smaller, more affordable homes. He said:
“Now look: most people, given the choice, would like to live in a nice big home. But I think for many young people – if I was 22 today, I would rather have the chance to own that than be priced out.”

Something tells me that no member of parliament would be prepared to live in any of these micro “homes”, even for just four nights a week.

At least Pocket’s “high quality compact living model” flats of around 37sq m are over double the size of the smallest. The company has built 297 with another 700 in the pipeline. The average price is £255,000 but a one-bedroom flat in Lambeth will cost £332,000, hardly pocket-money prices, but still well below the average price £421,553, paid by first-time buyers in the capital.

In 2014, researchers from Cambridge University discovered Britain’s new homes were the smallest in Europe; with an average floor area of just 76sq m, about the size of a tube train.

“We urgently need new homes, but building small homes or cutting corners when converting office buildings to flats is short-sighted and fails the people these new homes are meant to serve. The Government must take action to ensure a fairer minimum space standard is applied to all new homes across the country.”

It has long been recognised that small cramped conditions are detrimental to health and well-being. These micro homes may be perfectly suitable as temporary stop-gap accommodation for those made homeless. But surely they cannot be regarded as part of a long term solution to fix “Britain’s broken housing market.”  As a developed, first-world country, the UK government should not be promoting and rubber-stamping its approval for what is little more than the 21st century equivalent of a third-world mud hut.

Graeme Brown, interim chief executive of Shelter, said:
“In theory, converting offices sounds like a good way of creating some of the homes we need in a time of crisis. But in reality, it’s often used by developers as a way of cashing in on people’s desperation by building unaffordable, rabbit-hutch homes. Our homes are already among the smallest in Europe, and if the government allows developers to cut corners by slashing space standards in homes even more, they will be punishing ordinary families in the process.”

For more information, see Julia Park’s excellent publication One hundred years of housing space standards. What next?  What indeed.

2 Responses to Micro Homes – Smaller Than A Hotel Room