Home » Affordable home building has dipped to a 24-year low

Mr Healey also claims the government was trying to hide its “failure” classifying homes as “affordable housing” when they are available at 80% of market rent or can be being sold for as much as £450,000.

“Public concern about housing is at the highest level for 40 years. Millions of families are struggling with high housing costs.” 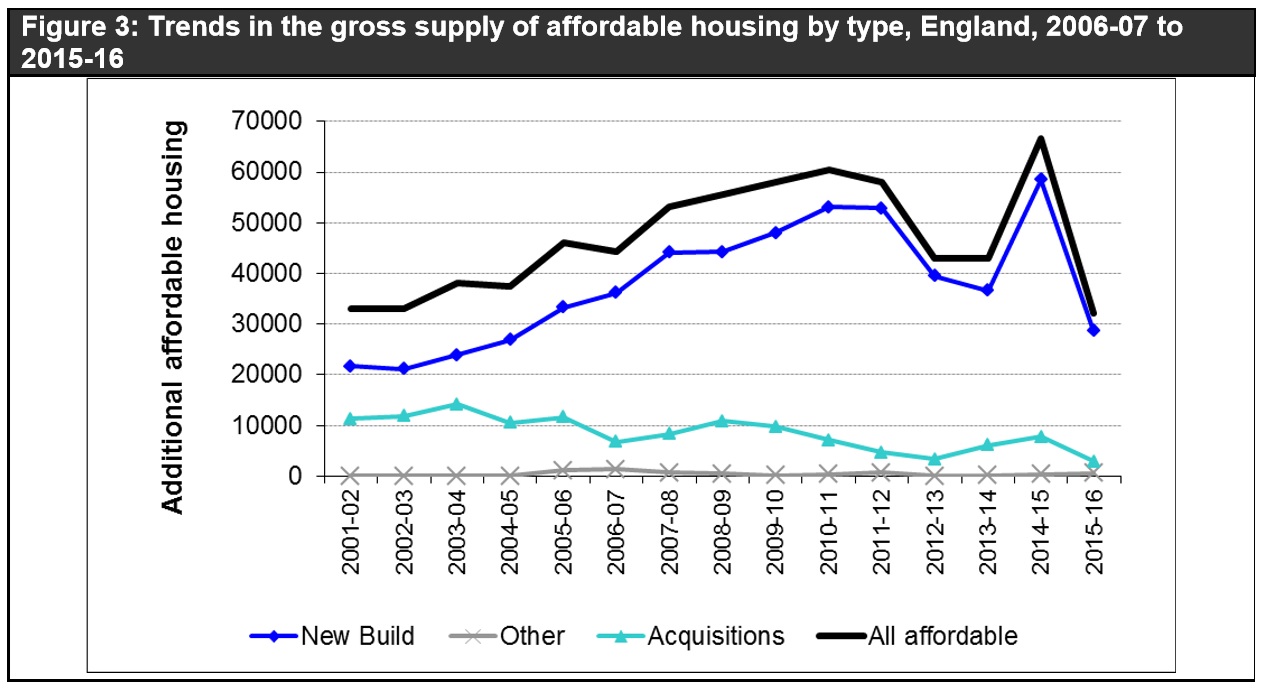 A spokesman for the DCLG explained the drop, saying:

“Delivery is normally lower in the first year of any new housing programme and so these figures are expected as part of a five-year housebuilding cycle. Building more homes is an absolute priority for this government, which is why we have doubled the housing budget to £8bn and we now have the largest affordable housing programme in 40 years. Furthermore, latest figures out this week show overall housebuilding is at its highest level in eight years and we will be publishing our White Paper shortly, setting out our plans to build more homes and more quickly.”

On average house prices have increased by 7% per year since 1980. Unsurprisingly, home ownership is now at its lowest level since 1985 at 63.5%.  So why has the government relaxed and abandoned affordable housing and social housing planning (section 106) requirements?

Anne Baxendale, head of policy and public affairs at Shelter told the BBC:

“At a time when this country is crying out for more genuinely affordable homes, these figures are not only shocking but unacceptable. With 120,000 children set to spend Christmas homeless and in temporary accommodation and a whole generation of private renters living from one pay cheque to the next, the new government needs to get a grip on this problem once and for all.”

Meanwhile figures obtained by the BBC through the Freedom of Information Act show councils in Britain have spent more than £3.5bn on temporary accommodation for homeless families in the last five years. During that time the annual cost has risen 43%, with councils spending £851m on temporary housing in 2015 alone, which could have been used to build around 8,500 new council houses on publicly-owned land.

Homeless charity Crisis said the number of people in temporary accommodation was rising at an “alarming rate” and the Local Government Association said the costs were “unsustainable”.

A spokesman for the Department for Communities and Local Government said:

“Time spent in temporary accommodation ensures people have a roof over their head and the number of households in temporary accommodation is well below the 2004 peak. This government has invested £500m to tackle homelessness – including prevention funding and £40m for councils to help rough sleepers. We are also backing Bob Blackman’s [MP] Homelessness Reduction Bill, which will also provide vital support for many more people.”

The Local Government Association said councils must be able to replace sold homes and reinvest in building more of the genuine affordable homes.

Research by Sheffield Hallam University Centre for Regional and Economic Social Research, analysed the UK’s nine largest housebuilders between 2010 and 2015.  It found that housebuilders are growing profits from the housing shortages across the country.

The nine largest housebuilders, responsible for almost half of all new housing starts in the country, increased their housing output by 33% in the period from 2012 to 2015. In the same period their revenues grew 76%, with profit before tax rising by 200%. The research also showed that accounting end of year profits for the five largest housebuilder increased from £372 million in 2010 to over £2 billion by the end of 2015 – an increase of over 480%.

“In 2015, the biggest five housebuilders returned 43 per cent of their annual profits to shareholders, an amount totalling £936m. This raises questions about the potential volume of new supply that could have been provided through reinvestment of at least some of this money.”

On Help to Buy

“Help to Buy has so far generated a 14 per cent increase in supply, which is well short of the fundamental uplift in output that is required. The risk with demand-side initiatives is that they end up simply subsidising households to afford high prices, and for a temporary period.”

“there is scope for the government to do much more to increase investment by local authorities, housing associations and other non-profit bodies for housebuilding. It needs the political will to do it.”

A spokesman for the research team also said:

“Reliance on the private sector alone is not enough: unless there is also a major upscaling in housebuilding by local authorities, housing associations and other non-profit organisations, the crisis in housing supply will continue”

“We know there is more to do to ensure the housing market works for everyone and not just the privileged few, and we will be setting out further details in our Housing White Paper shortly.”

A few suggestions for the White Paper: