Bovis fail to win a single NHBC Pride in the Job Quality Award.

Posted on 24/06/2015 by New Home Expert | Comments Off on Bovis fail to win a single NHBC Pride in the Job Quality Award.

“We build some of the best new homes in the UK.
We pride ourselves on being one of the country’s leading housebuilders and have established an enviable reputation for the quality of our build and design, high specification and excellent customer service.”

Well they would say that – but it can it be justified?
The truth was confirmed last Friday when the NHBC announced the 2015 winners of its Pride in the Job competition. “The NHBC Pride in the Job is the only UK-wide competition dedicated to recognising site managers who achieve the highest standards in house-building.”

Not one was able to demonstrate he cared about the quality of the homes built on his site. Not one possessed the “wide range of site management skills from technical knowledge and consistency in the build process to leadership and organisational skills, and achieving the highest possible standards and best practice in house building” that the NHBC judges were looking for. 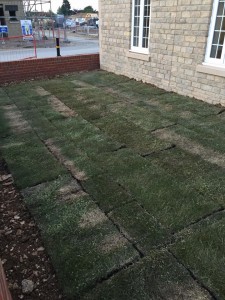 No one cares at Bovis!  They cannot even be botherd to set up a sprinkler to water new turf!

Not one of Bovis’ 97 site managers made the grade! Not one achieved “the highest standards in house-building” None of the 3,635 homes Bovis built in 2014 were built on a Quality Award winning site.

Bovis, already downgraded to three stars by its own customers earlier this year in the HBF National New Home Customer Satisfaction Survey results, are now unique amongst their peers in not having a single NHBC Quality Award winning site manager. “Excellent customer service?” Three stars would indicate otherwise. “an enviable reputation for quality of our build” no other housebuilder would “envy” not winning any NHBC PITJ Quality Awards. So congratulations Bovis, you can now be regarded as “Britain’s worst house builder” … Fact  – Not fiction.

All fizz but no champagne!

In March 2015 Tizer and Irn-Bru maker AG BARR confirmed it had recruited Bovis CEO and “senior finance professional” David Ritchie as a non-executive director. Surely Ritchie should be focussing his efforts on trying to stop the rot at Bovis by taking steps to improve build quality and customer service?  But it would appear that finance is all Ritchie knows or cares about.  In the company’s 2014 results Ritchie comments:

Bovis look to be on a self-destructing downward spiral and will eventually be bought for its landbank by the likes of Barratt. If David Ritchie cared he would act and act now.