Observations, news and views regarding the controversial government Help-to-Buy schemes.

It is a sad fact that homes remain unaffordable and it is difficult to get a mortgage unless you have managed to save a substantial deposit. “Help-To-Buy” the government’s “solution” is to subsidise the new home industry.

Since the first “state aid” for house builders ‘FirstBuy’ in March 2011, all the major house builders shares have soared, with many doubling in price and more! With the latest “incentive” ‘Help-To-Buy’ house builders do not even have to contribute anything, resulting in the biggest rise in their share prices since it became available in April 2013 (see the chart below.) 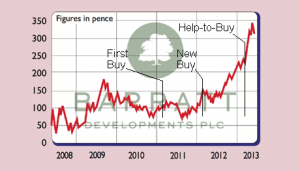 All three government schemes have helped house builders sell houses without having to reduce prices. This has resulted in a 50% plus increase in reported profits over the last year. As new home buyers now only have to find 80% of the price asked by house builders, many builders are actually increasing prices as the increased demand is not being matched by an increase in the number of new homes being built. Before the last property bubble burst in 2007, 200,000 new homes were built. The house builders currently estimate they will build just 110,000 this year, many on cheap land acquired during the last recession increasing profit margins even more.

The Chancellor should impose a windfall tax on all house builders using Help-To-Buy on profits above 20% of turnover, with anything above being taxed at 80%. Failure to do so would leave many drawing the conclusion that costly government support for house builders and their wealthy shareholders, means we are most definitely not “all in it together” assuming we ever were!

Comments Off on End Help-To-Buy ‘subsidies’ for house builders

Five reasons why ‘Help-To-Buy’ is a bad idea

Five problems with the Help-To-Buy scheme.

1. It could create a house price bubble

The UK is not building sufficient new homes to meet demand. Instead of focusing policy on the supply side the government has taken steps to increase demand by making it easier for people who couldn’t and perhaps shouldn’t to get on the housing ladder.

It is basic economics that if demand increases without an increasing supply prices will rise as a consequence of the shortage.

Government policy should not be underwriting and subsidising another housing bubble. This policy is not making homes more affordable but will make them easier and more expensive to buy.

2. It could help the well-off buy a second home

The Treasury has published a list of those who would be eligible to benefit from the Mortgage Guarantee element of the Help to Buy scheme, which is available on properties up to £600,000.

This did not rule out people using the scheme to buy a second home- an issue still yet to be clarified by the Government. The scheme may even be used by existing owners to remortgage their property.

As it stands, unless the eligibility criteria is revised to rule out people exploiting the scheme it looks like Osborne is making it easier for the well off to get wealthier.

Most experts argue that the State should be focusing policies that increase the provision of social housing to help those most in need in our society, rather than attaching itself to the mortgage market and helping house builders by making it easier to buy a new home.

The government should not be encouraging mortgage providers to lend to borrowers that it would otherwise consider too risky.

We all know what happens next.

The Government funds allocated for social housing are small beer when compared to the scale of Help to Buy, which could potentially underwrite £130bn of home loans.

4. The taxpayer is exposed to huge losses

If Help-To-Buy starts price bubble in the housing market that then bursts, leading to a property price crash many borrowers “helped” to buy could default on their repayments and lenders being forced to repossess and sell.

If house prices fall with resultant losses, it will be the taxpayer picking up most of the liability.

5. It may not lead to cheaper mortgages

At present only the banks partly owned by the taxpayer, Lloyds Banking Group and Royal Bank of Scotland have agreed to use the Help to Buy Mortgage Guarantee Scheme. If the scheme is to be a success it will depend on the uptake by lenders and the extent to which they reduce their rates and fees prices to account for the Government underwriting loan guarantee.

At present current financial regulations force banks to hold over six times more capital against 95% loan as they do for a 60% loan. The regulator may be looking at offering banks some relief from the capital adequacy rules.