Christmas comes early for house builders as government caves in

Ministers have caved in to pressure from the large house builders  and their trade body The Home Builders Federation (HBF) to lower standards, meaning councils will have no longer have power to require and impose stricter standards. This will result in many more small, insecure and unsustainable new homes being built in Britain.

Instead of learning from construction best practice, the government has caved in, yet again, to pressure from “big housebuilding.” 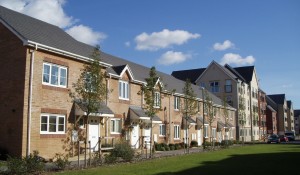 The government’s main aim of the technical housing standards review was to strip out standards, rules and regulations that complicate the house building process. The RIBA had lobbied to force house builders to build bigger new homes via their ‘Case for Space’ campaign. Other initiatives included reducing carbon footprints, improving security, on-site renewable energy sources, and rainwater harvesting to reduce water consumption. Despite this, the brief has been used as an opportunity of further reducing the cost of building  new homes and stop local authorities from demanding certain conditions as part of the planning process.

This was a lost opportunity to examine how the nation can build great homes for the next generation and beyond, requiring new homes to have proper security features, sustainability, access standards, and a reasonable and decent amount of space to live in. Instead we will now have the same cramped, over-developed housing estates with standardised small new homes being built up and down the country, lowering house builder’s operational costs and increasing, their profit margins even further.

In March, Eric Pickles, the communities secretary, said families had been “trapped in rabbit hutch homes“ due to density targets of at least 30 homes per hectare imposed by the previous Labour government. However the conclusions of the review are an early Christmas present for the national plc house builders.  Just what the likes of Barratt’s Mark Clare, Taylor Wimpey’s Pete Redfern and in particular,  Steve Morgan of Redrow Homes, had been asking Santa for!

All existing standards required by local authorities are being scrapped and they will be required to re-examine their entire local plans if they want to adopt any standard above the minimum level. The government confirming: “Our clear aim is that authorities will only be able to adopt standards that are strictly necessary and justifiable and will not default to adopting them all because they are seen as nice to have.”

From now on, local authorities will only be able to choose from the government’s new, approved list of standards  and will not be able to ask for anything different, even if an identified need is overwhelming.

The House of Commons environmental audit committee has savaged the government’s approach, finding that standards had been reduced to the level of the “lowest common denominator”, and in particular that research on the falling cost of sustainable features in new homes has been ignored.

It was about time that the government examined new housing standards. Too many new homes are too small, too dark, too cramped, insecure and will fail to meet the changing needs of the population.

This entry was posted in New Homes and tagged house builders, planning, standards. Bookmark the permalink.