How indicative is HBF customer satisfaction survey and the builder star ratings it generates?

Whilst the published results of the 2015 survey suggest that 86% would recommend their builder to a friend, 19% would not buy from the same builder again. In addition, 93% of new homebuyers had reported problems to the builder during the first 8 weeks. It is also questionable, how a house builder can achieve a five star rating from just 11 completed surveys.

How informative is this? Does the HBF release enough information from the survey?

There is also cause for concern over the methodology for obtaining and processing the figures used to generate the statistics for Star Rating. There is a potential for bias and the obvious disconnect between the question asked and what the answers are then construed as evidencing. Recommending your builder to a friend could indicate any number of things, with build quality being only one possible reason. In addition, the key star rating question is actually asked twice! Once (Q1) with a Yes/No option and again (Q2) as “On a scale of 0 to 10 how likely would you be to recommend your builder to a friend?” Clearly any perceived satisfaction can be (and in my opinion probably is) manipulated, especially as the results of the second version of the question are not made public at all.

How accurate and indicative is the current survey?

Does the HBF release enough information from the survey?

When I asked the HBF why the results for each individual builder scores for every question were not made public, their spokesman told me: “publishing more detailed company results would not have had any more impact on raising customer satisfaction among new home buyers. But it would most certainly have provided food for those who are prejudiced against the industry and simply seek to criticise.”

So it would appear the primary reason for the HBF survey is to “raise customer satisfaction” (marketing), rather than enabling consumers to make an informed choice by identifying and exposing the worst house builders. The HBF response would also indicate that the house building industry is indeed withholding useful consumer feedback by not making public all the results to every question for each specific builder. The results to question 19 “Were you given a copy of the Consumer Code for Home Builders Yes/No/Don’t Recall” are not released either. Last year, only 57% said “Yes” despite it being a requirement (1.2) of the Code that buyers are given a copy on reservation. Only HBF member builders can be given a star rating and only privately sold new homes with an NHBC warranty are normally sent a survey. Of the surveys returned: the surveys returned by Barratt homebuyers equated to around 46% of the total homes they built, Persimmon 38% and Bovis just 28%. This despite builder’s site-based staff often bulling buyers into completing the survey and answering “Yes” to the key star rating question: “Would you recommend your builder to a friend?”

I believe it is time the industry’s own national new home customer satisfaction survey was carried out by a fully-independent body and sent to every new home built, regardless of tenure or warranty provider. The builder star ratings should be calculated, based on the responses for every question, not just one.

Should the industry publish the results of the second survey that they conduct after 9 months?

Yes. I believe in the interests of transparency the NHBC should make public the results of this survey. The NHBC satisfaction survey is aimed at owner-occupiers and is sent out nine months after legal completion. The questionnaires are posted by the NHBC to all those NHBC Buildmark policyholders that have completed the cover Acceptance Form. (Tenants or owners not living at the address are excluded.) The NHBC say they sent out 100,000 surveys (both 8 weeks and 9 months – 32,290) and had a total combined 60,000 responses.

The NHBC say “the results are shared with the appropriate builder and not published externally, or shared with organisations such as HBF. This survey shows broadly similar results.”

If you have your head in the oven and your feet in the fridge, statistically your average temperature is fine, but you are dead. In addition, the nine-month survey does ask additional specific questions about problems with the home, the standard of the repairs and service from the builder carrying out remedial works to defects. As such the results of this survey would be far more indicative of customer satisfaction levels than the 8-week survey.

There aren’t figures for how many new builds have quality issues. But in your experience, how common is it? 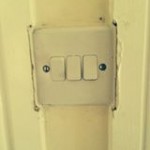 It is more common than we know. Many buyers do not want publicity for fear devaluing their home or not being able to sell it in the future. Some appear frightened or intimidated by their house builder, afraid perhaps that their defects won’t be fixed. Other new homebuyers may be even be embarrassed or ashamed they made such a poor buying decision on such an important purchase!

Do we just need to accept that there will always be some issues with a new build, and that house builders should get time to come in and make it right?

No! That is what house builders do, they manage buyers’ expectations during the buying process down to a low level whilst making their “customer care” service appear like an added advantage of buying a new home. Under promising and under delivering. The HBF survey shows everyone expected problems. It is a demonstration of their sales expertise that in an industry which sells a virtually 100% defective product, should do so on the basis of quality and convenience! From the Office of Fair Trading mystery shopper exercise OFT UK Homebuilding Market Study 2008 :

It is not impossible to build a perfect home – a home free of obvious defects. All that is required is time. Time for regular thorough inspections and time to correct defective work. It is better for all concerned if defects and snags are rectified before buyers move in. That said, the majority of new home buyers are completely unaware that there are specialist companies, professional snagging inspectors, who could represent them in their dealings with the house builders, before and after they move in.

During your presentation to the committee at the APPG Inquiry into the quality of new build housing, you called for a New Homes Ombudsman. Why do you think that would be more effective?

An Ombudsman would be able to award justifiable compensation up to £150,000 to homebuyers. As it stands, the warranty providers do not pay any compensation at all and the Consumer Code for Home Builders Adjudication Scheme can only award a maximum of £250 for inconvenience – most consumers are unaware of the CCHB anyway – there have been 133 cases in six years – 47 of those in 2015.

In addition, each house builder would be required to pay an additional £400 fee for each complaint the Ombudsman receives. This would encourage, (perhaps force) house builders to be more consumer focused. It would be better to engage with their customers rather than being actively dismissive of any complaint as they are now. At present consumers have no recourse other than taking legal action against the builder; but builders have deeper pockets.

What powers would it need?

To be able to award compensation of up to £150,000 to buyers and legally enforce builders to abide by their decision. Ensure that non-compliance with the provisions of the Consumer Protection from Unfair Trading Regulations 2008 result in criminal enforcement action. The regulations allow for fines up to £5,000 in a magistrates’ court, or an unlimited fine and up to two years’ imprisonment for a conviction in the Crown Court.

More on what a New Homes Ombudsman would do:

Sometimes people accuse the Ombudsman of being pretty toothless.

I think they are confusing Ombudsman with regulators such as Ofgem and Ofcom. The Ombudsman would act as a totally impartial adjudicator for all matters related to buying a new home. The CCHB does not cover warranty issues. The Warranty does not cover misrepresentation and mis-selling matters with neither awarding compensation. I would welcome the opportunity to advise on the setting up a New Homes Ombudsman.

What do you think the main causes are for lack of quality across the industry?

All you need for a successful business is a great product and a satisfied customer. House builders fail on both counts with an alarming regularity. Number one reason is a general lack of care. No one cares about the quality of the product, from the CEO to the trades working on site. It’s all about getting the homes built as quickly as possible. It is not impossible to build a perfect (or near perfect) new home. It may just take a little longer. That said, directors and senior managers within the industry will always place profit above quality.

Is it because of time constraints for builders?

It is a big problem but one created in the boardroom, not on the sites. As I said, more time to build should result in better quality, more time for inspections and most importantly, time to rectify defective work.

The CITB was set up as long ago as 21 July 1964 “to collect a levy from construction employers and use this to provide training and skills in construction.” New home quality is just as bad when fewer homes are being built as it is now. A lack of care is the issue. There are not as many quality issues on commercial construction contracts.

Not using the best materials?

Is the  inspection system not good enough?

There are eight stage inspections for Building Control, six of these are mandatory. There are just four stage inspections for the Warranty. The likelihood is that the NHBC will be doing both combining. The warranty and building control function should be split up so at least two inspectors visit each new home. A Bovis site manager in Watford told a snagging inspector that one house was signed off on the basis that inspector had seen the other next door!

What would you advise anyone thinking of buying a new-build home?

They should think very carefully about it and go into it with their eyes open, having done proper research. My website has lots of great advice and information, including the do’s and don’t’s when buying a new home. The three most important things are: