In its report, published on 26 June 2018, the All-Party Parliamentary Group for Excellence in the Built Environment called on the government to make it mandatory for all housebuilders to belong to an independent ombudsman scheme.

Close but no cigar, that’s my verdict on the All Party Parliamentary Group EBE report from their secret, behind closed doors, inquiry sessions in “February and March”  “looking into the potential and detail for a New Homes Ombudsman.”  The good news is the report acknowledges that: 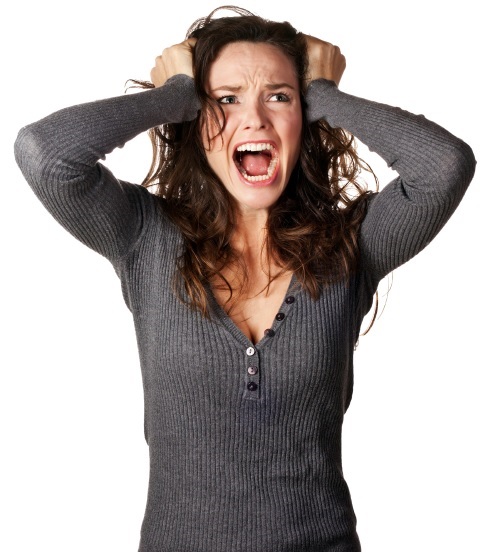 “Buying a defective new home can take a massive toll on people’s wellbeing as they wrestle with an almost Kafkaesque system seemingly designed to be unhelpful. We cannot allow this to continue. Consumers desperately need greater leverage to drive a change in this culture in order to ensure that housebuilders put them at the heart of what they do.”

Kafkaesque: bureaucratic delays, a situation that is confusing and frightening, especially one involving complicated official rules and systems that do not seem to make any sense, a nightmarishly complex, bizarre, or illogical quality. 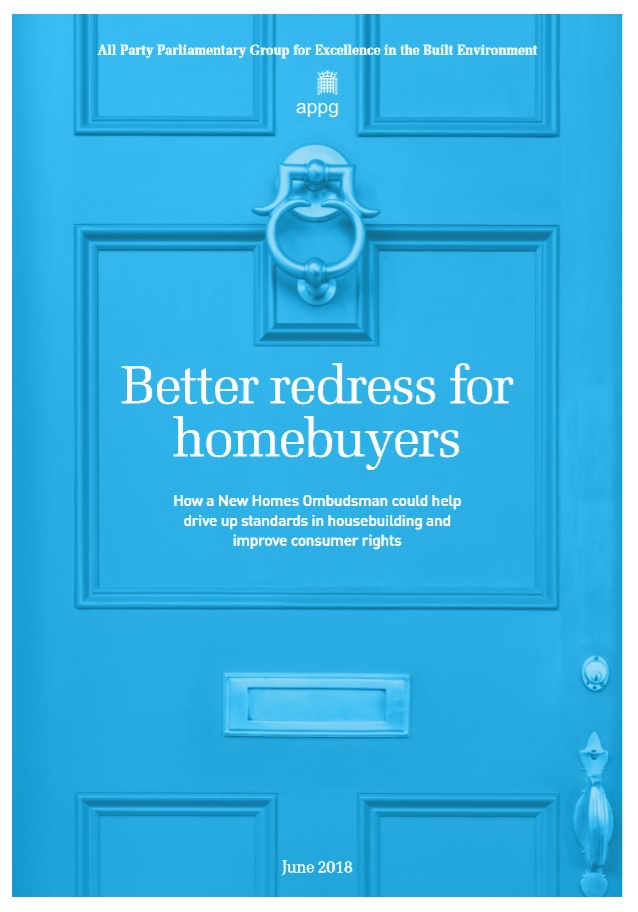 Much of this latest APPG EBE inquiry report, (published 27 June 2018), repeats previous recommendations of the 13 July 2016 Inquiry report strangely titled “More Homes Fewer Complaints” .  Indeed this report could also have been more accurately titled “Better redress for new homebuyers” as it concerns a New Homes Ombudsman. However, the title belies the government’s preferred option of a New Homes Ombudsman within a wider, ‘single portal’, general “Housing Ombudsman” however, “due to the technical nature, suggested new homes disputes would need their own separate and bespoke operation” Even the HBF agree with this, but government should be mindful that HBF’s motivation may be an attempt to retain industry control and influence over any stand-alone new homes ombudsman.

The report states : “We have been heartened to hear of efforts to improve performance from the Home Builders Federation (HBF), senior management at many housebuilders are taking steps to address the multiplicity of issues” according to the HBF. It was a great pity that the person that originally proposed the idea of a dedicated new homes ombudsman at the 2015 APPG EBE inquiry, was not even invited to orally rebut this industry-led smokescreen of lies and untruths. On page 20 Box 3, the HBF director of communications did a sterling job using words such as “put schemes in place” “progressing” “developing” “working with” “prepare” yet not one shred of “we have done” in the two years since the first inquiry report was published. He even claimed that the spectacular fall in satisfaction levels over the last five years (over 8%) in the industry’s own survey, “had been arrested” by a blip upwards of just 2% last year. I believe this is more a result of industry manipulation rather than any perceivable genuine increase in overall satisfaction levels. Recommendation 10 of the previous inquiry report was that the HBF annual customer satisfaction survey be more independent. Has the HBF progressed this?  No, there has been not a single change.

Indeed, reading this inquiry report it can be concluded that various interested parties within the industry (HBF, Consumer Code for Home Builders (CCHB), Consumer Code for New Homes, NHBC, LABC, Ombudsman Services, and Housing Ombudsman, all gave oral presentations) have their paw prints all over this report. The report concluding: “We were encouraged by a more positive tone from housebuilders, warranty providers and operators of consumer codes of conduct than we encountered in our first report”  Perhaps this only because of the growing likelihood of an independent new homes ombudsman who will making honest rulings on the facts and award justifiable, meaningful compensation. Whilst also making those operating various industry-led consumer codes redundant.

It was however encouraging, that many of the points made in my written submission were included in the inquiry report, including requiring housebuilders to buy-back their most seriously defective new homes.

So what is the good, the bad and the ugly?

Need for a New Homes Ombudsman is recognised

On a positive note the APPG EBE again acknowledges the need for an independent new homes ombudsman, free to consumers and funded by a levy paid for by housebuilders. I suggested £100 per home built. The report suggested £50 per home, raising £8.5m a year (170,000 homes). The HBF accepts their industry should pay. Nevertheless despite to obvious need for a new homes ombudsman, which even the industry itself appears to now accept is inevitably required, the Government has done nothing at all to help new homebuyers, which this report acknowledges are “going through hell”, “fighting redress was taking a toll on their health”. One distraught new homebuyer even told me last week that he was considering killing himself!

The report recommends (as I did in my written submission) “that in certain extreme situations, the New Homes Ombudsman should be able to reverse the sale of the property”  The re purchase price should be at current market value to include all associated moving costs, stamp duty, legal fees, carpets and curtains etc.

All New Homes Ombudsman rulings to be made public

This is to “flag up trends in housebuilders’ performance and publish annual reports collating awards made throughout the year.” This would enable future potential new homebuyers to see the worst offenders.

“A statutory requirement that any organization building and selling new homes belong to the New Homes Ombudsman to be able to trade.”
“If they are struck off, they lose the ability to operate.”

“To see if they are fit for purpose for homebuyers and to establish and easier form of redress with warranty providers as part of a New Homes Ombudsman role.”

It remains to be seen if the NHO staff at any housing ombudsman would be sufficiently skilled, with adequate technical knowledge to fully understand and rule on the technical aspects of building defects, warranty standards and building regulations.

Case fees would to penalise the worst offenders but the committee thought “the disadvantages would out way the advantages.”  If there are no case fees, there is no financial incentive for housebuilders to attempt a settle a complaint without recourse to the Ombudsman.

This is a let off for housebuilders. The only reason given was that it “mirrors the duration for the housebuilders’ liability for defects.” However, the 2-year timescale does not bring warranty schemes under the new homes ombudsman jurisdiction, despite the committee acknowledging my observation that the “The Financial Ombudsman Service (FOS) is not the best organisation to preside over technical disputes.”  New home warranty providers would not be included in the new homes ombudsman scheme as they are already covered under the FOS.

Awards made by the new homes ombudsman to consumers would limited to £50,000

Whilst this is better than the pitiful £15,000 maximum of the CCHB, it does not go far enough given the cost and inconvenience to owners with serious defects. Going to court is not an option for new homebuyers. Housebuilders have deep pockets would and do, fight every buyer legal action, settling subject to a non-disclosure agreement for fear of setting a precedent. Amazingly, the report concludes that the NHO should operate along the lines of other ombudsman to ensure “the consumer not be out of pocket and that their financial status is restored to what it was before the complaint.” This clearly isn’t going to work for new homebuyers with many having to stay in temporary accommodation whilst their homes serious defects are remediated. Sadly this demonstrates the lack of understanding by the committee of the overall problem faced by new homebuyers, something which I could have helped with had I been invited to give an oral submission.

The report recommended that any new homes ombudsman would not be statutory, despite a number of witnesses recommending this to the inquiry committee.

There is little point of asking for expert opinion if when given, it is then ignored. This is being suggested purely in the interests of simplicity and speed “because it can be set up more easily and quickly. Our overriding concern is to see consumers getting better redress as soon as possible.” It has now been over two years since the first inquiry report “Key” number 1 recommendation being the setting up of a new homes ombudsman. Why has government failed to do anything regarding setting up an ombudsman for new homebuyers’ redress, when it is obviously time critical? Indeed the Government’s own consultation  which ended on 16 April 2018, has not even finished “analysing feedback” over 3 months later!

A new “Industry-wide code of practice”

There are apparently seven consumer codes regarding new homes – “all different but sharing a general lack of obligations placed on home builders.” The Property Ombudsman said that the Codes “are written in a way to suggest that they exist to contain complaints” which indeed they do, all being set up following The Consumer Protection for Unfair Trading Regulations 2008.

But the worst part of this report is the proposal for a new “industry-wide code of practice, with government, warranty providers, housebuilders and consumer groups working together, in consultation, to draw up a code that would be used by the new homes ombudsman (NHO) to adjudicate on disputes.”  Not only will this give the industry an opportunity to influence what the new homes ombudsman can and cannot rule on, it will also mean the NHO would be shackled by the requirements of a single, industry-approved code of practice, which many housebuilders will be able to circumnavigate as they currently do with their own CCHB. I cannot think of a single ombudsman, in any sector, that can only adjudicate within the confines of a specific industry code. No single code could possibly cover every eventuality for new home consumer redress. It gets even worse with the HBF suggesting that “a detailed set of finishing standards for an ombudsman to apply when assessing the merits of complaints and resolving disputes” no doubt in their mind the housebuilder’s existing NHBC ‘Get out of Jail Free’ card The “Consistent Approach to Finishes” which is used to justify atrocious workmanship standards as permissible, if deemed “within tolerance”

It remains to be seen whether this APPG EBE Inquiry Report is given any consideration by government. Clearly, none of recommendations of the previous inquiry have been implemented. In the meantime, every week many thousands of new homebuyers move into homes that have defects, often serious defects, only to discover housebuilders and warranty providers are failing them. It is time the government stood up to ‘big housebuilding’ and set up an independent New Homes Ombudsman without any further unnecessary bureaucratic delay.