The Daily Mail reported this week that three Persimmon directors are in line to receive a staggering £100 million pay windfall. This is part of a £400 million bonus pot linked to a long-term incentive plan equating to around 10% of Persimmon’s market value.

To qualify for the huge payout, Persimmon must give shareholders 620p in dividends between now and 2021. The rewards plan 2012 – around 30million shares in Persimmon, will pay out to several directors. Chief executive Jeff Fairburn, finance director Mike Killoran and southern regional director Nigel Greenaway all stand to share around £100 million. To qualify for the payment, Persimmon must pay certain dividend amounts by the end of 2015, 2017, 2019 and 2021. For 2015, the required amount is 170p. The firm has already declared dividends of 145p and has announced an intention to pay 95p in 2015. So job done for the first tranch of shares! If any biennial target is missed the scheme folds, although they will be able to keep any shares already secured from achieving earlier targets, but they will have to pay to get their shares. If all the targets are met by 2021, they get the shares for free.

Persimmon say the scheme was drawn up when the share price was 620p and that the directors would have to double the size of the company in ten years to benefit. A spokesman for Persimmon told the Daily Mail:

“The analysis simply assumes that the share price in 2021 will be the same as it is today and ignores the challenge of returning £1.9billion to shareholders, while simultaneously growing the business to deliver an increase in the ex-dividend share price performance period of almost ten years……..This is a long term plan which is designed to drive outperformance through the housing cycle and there remains a very long way to go” 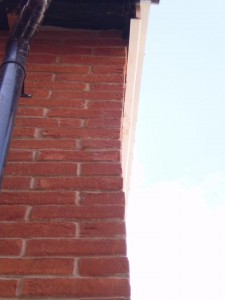 After making the announcement to pay special dividends to shareholders over the new few years, it was hardly surprising the company’s share price rose.   It has nothing to do with adding value to the company or any perceived ability of those running it.  The incentive scheme made no mention of targets for improving the quality of the actual homes Persimmon build (see photos below!)   No mention of a target for a certain number of NHBC Quality Awards increasing each year.  No mention of attaining a 5 star Customer Satisfaction HBF survey rating and no mention of reducing the number of complaints the company receives from its customers.

Proof, if ever proof was needed, that Persimmon cares only about money, making it for their shareholders and their directors.  Only time will tell if they run out of naïve young idiots to sell their over-priced tiny homes to before interest rates rise and the current artificially created bubble demand falls off a cliff.  If their sales were created and driven by reputation alone, Persimmon’s directors would almost certainly get nothing!

The UK shareholders’ Association say the arrangement is a “case study in regulatory failure….a huge transfer of value from a scheme that was never justified in the first place and has since been inflated by the effect of Help to Buy”.

It must surely be time for the chancellor to impose a large windfall tax levy on the excessive house builder profits, created on the back of the taxpayer-funded Help to Buy scheme.

This entry was posted in Help To Buy, Persimmon and tagged bonuses, CEO, Jeff Fairburn. Bookmark the permalink.