Is the Consumer Code for Home Builders fit for purpose?

Posted on 02/05/2014 by New Home Expert | Comments Off on Is the Consumer Code for Home Builders fit for purpose?

After close examination of the recent Adjudication Scheme case histories, we ask……..Is the Consumer Code for Home Builders worth the paper it is written on?    The clue is in the name “For Home Builders” not for homebuyers.  At best, house builders tend to view the Code as voluntary or optional despite many of the Code requirements actually being required by consumer legislation.   At worst, as is shown by the published case summaries, house builders knowingly continue to disregard the Code requirements in the full and certain knowledge that the worst that could happen would be slap on the wrists and a small award against them.  Now in it’s fifth year, the Code is frequently referred to by the industry being used as an opportunity to promote new homes. 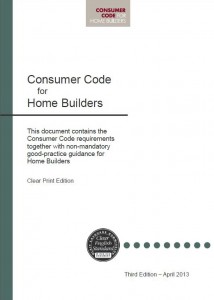 The Consumer Code for Home Builders was launched in April 2010 apparently as a response to the Barker Review in 2004 and Office of Fair Trading – Market Study of Home Building in the UK published in October 2008. The Consumer Code is allegedly the house building industry’s response to the issues raised in those reports relating to customer service and satisfaction. It was created by a “group of stakeholders within the industry” who “joined forces to consider the issues raised” to “produce a Code of Conduct for home builders.” It was first launched in April 2010 – over FIVE YEARS after the deadline in Barker’s report!

The Code claims to:  “provide protection and rights to purchasers of new homes, ensuring that all new home buyers are treated fairly and are fully informed.”  But the protection already exists with The Consumer Protection from Unfair Trading Regulations 2008, making it a legal requirement to treat consumers fairly and The Business Protection from Misleading Marketing Regulations 2008 reinforces the legal requirement not to make misleading or false statements. The Consumer Code for Home Builders if strictly followed, should result in compliance with the legislation, probably the main reason it was created by the house building industry.

The Code applies to all house builders registered with the new home warranty providers such as the NHBC, LABC Warranty and Premier Guarantee.  It consists of 19 requirements and principles that house builders must adhere to in marketing, selling homes and their after-sales customer service.  Failure by a house builder to adhere to the code requirements can result in exclusion from all registers run by the warranty bodies that participate in the scheme. Has this ever happened?  Very unlikely!

But is the Consumer Code effective?  –  Do house builders strictly follow it?  –  Are punitive penalties being imposed on builders who are found to have deliberately breached the Code?   Going by the latest published Adjudication Case Summaries for 2013 it would appear not.

END_OF_DOCUMENT_TOKEN_TO_BE_REPLACED

Comments Off on Is the Consumer Code for Home Builders fit for purpose?