In the days of British Leyland, it was often said that a car with several faults was a “Friday Car” – meaning it had been built on a Friday, with workers not being quite as attentive to quality and what they were doing as perhaps they should have been. Fortunately, the car industry has come a long way since those days with both the quality and reliability of new cars much improved.

However the same cannot be said of the house building industry. New homes are still being built with as many, if not more faults and defects than they were 20 years ago. The situation is even worse in an “end-of-year figures” new home. These are homes that are sold and the construction process rushed to enable legal completions to take place so as many homes as possible can included in the house builder’s financial year-end report to the City and shareholders. Homes built in the run up to the end-of-year date are always of inferior quality, even worse than the national house builders usually build, with a lower overall standard of finish, incomplete works and forced drying out causing excessive cracking to finishes. 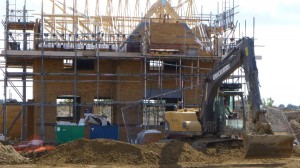 Rush job! Will it be completed in time for you to move in 4 weeks?

Each regional office will report how many homes they have built and sold, within the company’s financial year. The overall total is then recorded in the firm’s final annual financial accounts. Each region is given a target number of completions to achieve each year and everything (and anything) is done to ensure the required figure is reached. In the past it has been known that buyers were handed large cheques by directors as a “sweetener” to persuade them to legally complete on their new home – even though it was nowhere near finished or even ready for occupation. It was not unheard of for buyers to move in with their electricity and heating powered by a temporary generator or their water supply provided from a hose connected to a standpipe in the footpath! Another ruse sometimes used when a part-exchange is involved, was to let the buyer remain in their old home whilst their new was being finished.  Quite frankly this practice was nothing short of fraud.