New homebuyers are short-changed as the latest revision to housebuilders’ ‘non-mandatory’ Consumer Code is published.

A year ago, I wrote an article that I showed the Consumer Code for Home Builders (CCHB) is failing new homebuyers.  The all-party parliamentary group (APPG) Inquiry Into the quality of new homes concluded in its Report that:

Well it’s about to get a whole lot worse!
In September 2015, the CCHB announced a triennial review of  Code, at that time changes were expected to come into effect in 2016 – “to ensure it continues to evolve with the industry and changing consumer needs and as a result of adjudication cases.” It claims “The industry has now made great strides in producing an updated Consumer Code which is fit for purpose in today’s world”   Talk about hype! 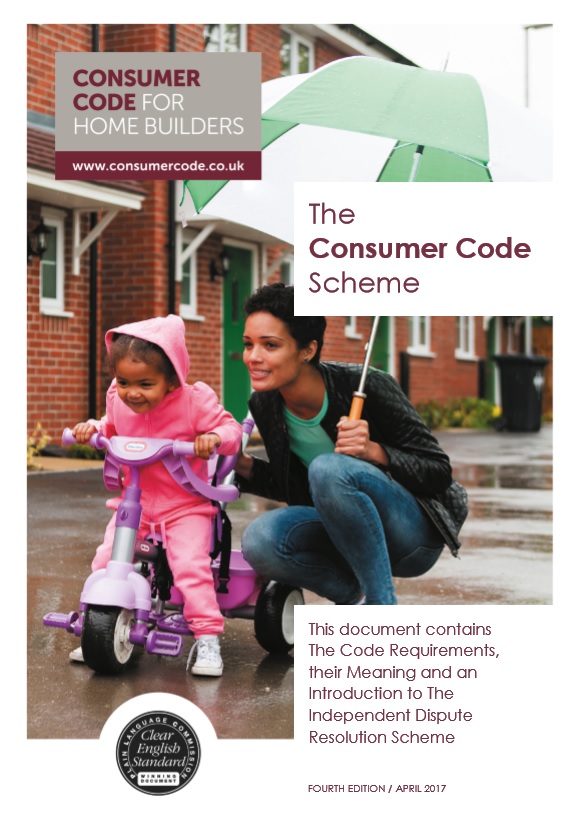 Last week the CCHB published the 4th incarnation of their consumer code, which I believe now contains specific revisions which severely diminish the likelihood of a successful claim by new homebuyers seeking redress and justice from errant housebuilders. The changes, place additional restrictions that can best be described as obstructive, the sole purpose of which is to protect the industry from the very few homebuyers that go through the rigmarole of Code’s dispute adjudication process.

The Home Builders Federation (HBF) fingerprints are all over these revisions. The HBF latest Annual Report confirmed the “HBF sits on the Code advisory forum to ensure house builder’s interests are represented. We submitted a response to the ongoing review Consultation and are working to ensure that any changes are workable for the industry.”
Well that’s mission accomplished!

Revising the Code provided an opportunity for the Code to evolve and attempt to meet the requirements of the Chartered Trading Standards Institute’s (CTSI) Standards for Alternative Dispute Resolution (ADR). Approval by the CTSI is required to comply with EU DIRECTIVE 2013/11/EU (21 May 2013) on ADR for consumer disputes. This requires the ADR to be provided by a certified body to show it meets the principals set out in the Directive and associated regulations. ADR schemes cannot achieve certification unless they meet strict criteria for impartiality and independence.

“In 2014, the Code’s management board took the decision to gain approval through the Chartered Trading Standards Institute (CTSI) Consumer Codes Approval Scheme (CCAS). It was important to show how the Code helps strengthen consumer protection and improve customer service standards by approval of the CTSI under their CCAS. This facilitates self-regulation.”

Despite the latest revisions, the Consumer Code for Home Builders has not been approved or accredited by the CTSI. Indeed, the now defunct Office of Fair Trading (OFT) withdrew its endorsement of the scheme in 2010 before it was even launched! This was because the Code’s dispute resolution service would only deal with complainant claims below £15,000. The OFT had wanted a cap of £150,000. At the time, Rod MacEachrane, a former NHBC commercial director and chair of the CCHB management board, confirmed that the OFT was:
“no longer part of the equation. It (OFT) said we were not meeting our commitments under the market study” [OFT report in 2008]. MacEachrane told Building magazine that “a cap of £15,000 would deal with 95% of disputes and was vital to ensure it remained a low-cost dispute resolution service.”
Low cost for house builders that is!

To add to the confusion, complaints can be covered by a different and separately operated Code – the Consumer Code for New Homes  (CCNH) – which is not available to buyers with NHBC, LABC or Premier Guarantee warranties. Under the CCNH claims  “are subject to a maximum aggregate award of £50,000 inclusive of VAT and maximum awards for financial loss of 25% of the purchase price of the Home and maximum awards for emotional distress and/or claims for inconvenience of £1,000” –  far more generous than the “protection” buyers allegedly have with the CCHB!

The CCHB annual report (2015)  said:  “Consumer Code is a central part of the core criteria for the Help to Buy schemes in England Scotland and Wales.” Nevertheless many housebuilders regularly breach one or more of the Code’s 19 requirements as can be seen from the Adjudication Case Summaries which show multiple Code requirement breaches in the 57 homebuyers’ claims that succeeded in 2016. Nevertheless, the awards in these successful cases represent less than a fifth of the total amount claimed by new homebuyers.

So what are the changes to the Consumer Code for Home Builders?

The new CCHB 4th edition April 2017  comes into effect on 1st April 2017, but there is a transitional period and for reservations made before 1 July 2017 “complaints will be assessed against the previous version (Version 3) of the Code.” 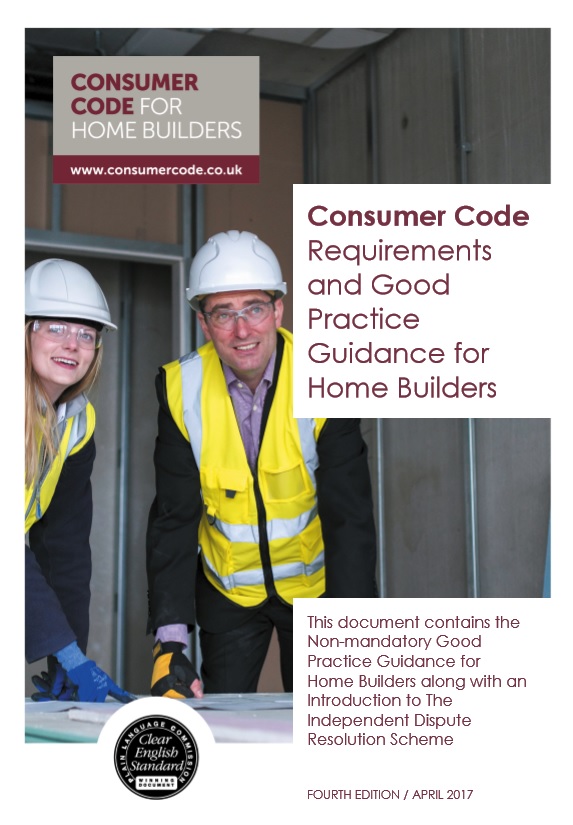 Firstly there are a few re definitions most notably that the “Dispute Resolution Scheme” is now referred to as the “Independent Dispute Resolution Scheme”, no doubt an attempt to give the impression of independence from industry interference and to head off the growing calls for a New Homes Ombudsman  to be appointed by government, which will make the CCHB entirely redundant. The needs of ‘vulnerable customers’ should now be considered at all times. In the absence of any definitive guidelines, we can only presume that housebuilders will have to formulate their own views of defining vulnerable customers. But I doubt naïve first-time buyers will be considered “vulnerable.”

Scope of the Code

The Code does not apply to investors now defined as buying more than one property on the same development for investment purposes.

Strikingly, for a Code that so few new homebuyers are aware of, with just 55% being given the Code on Reservation (requirement 1.2) according to responses to Q19 of the HBF survey, the requirement to display the Code and give a copy to anyone who asks for it has been removed. The Code scheme Logo must now be displayed in housebuilders’ and agents’ sales offices and in sales brochures, but the requirement for the housebuilder to inform their customers that further guidance is available and how they can get this has also been removed.

Homebuyers must still be provided with the Code (Code Scheme) with the Reservation agreement “but this can be done by electronic means” – a link to the Code website or an attachment in an e mail presumably. In addition, there is no requirement to provide the version of the Code that contains the ‘House builder guidance’ – essential for those wishing to make a claim using the CCHB Dispute Resolution Scheme. The version with ‘builder guidance’  can be found here but can hardly be considered easily accessible!

I recently visited an 18-month old Barratt sales office and can confirm they were no CCHB logos anywhere to be seen. On mentioning the CCHB to the sales advisor, I was given their only hard copy, a second edition CCHB dated April 2010! However, it was confirmed that the CCHB was given to all buyers with warranty details at reservation.

High pressure selling techniques are now excluded to meet CTSI requirements. Previous references to the Property Misdescriptions Act 1991 and the Consumer Protection from Unfair Trading Regulations 2008 have been replaced with “comply all relevant legislation”

The requirement to be shown “the layout” has been qualified to now show a “general layout” following adjudication decisions made on historic complaints using the dispute resolution scheme, no doubt designed to reduce the likelihood of a claim succeeding.

There is a clarification that access to areas under construction may be properly barred or restricted. In other words, you cannot view or inspect your new home until all works are completed. As is often the case, works are ongoing right up to and after buyers legally complete and are given their keys, this has the potential for confusion. No doubt all housebuilders will use this requirement as and when it suits them to do so.

It is illegal for a housebuilder to require any homebuyer to use a specified firm of solicitors. Nevertheless, under the Code, buyers can be induced to do so by builders offering incentives such as legal fees paid, part-exchange or stamp duty paid.

Various clarifications including how long the price is valid and the likely range of monetary deductions from the reservation fee, if the sale is cancelled. Most important to note is that due to “a high number of adjudications have been found against home builders”, the guidance now suggests that “appendices and schedules be attached to the reservation agreement” evidenced by both the housebuilder and the homebuyer in recognition of them having been seen and received and to act as proof “that the home and its specification was agreed and explained at the point of reservation.”

Reference to specific legislation has been removed. Namely the Unfair Terms in Consumer Contracts Regulations 1999. No doubt to make it more difficult for buyers to find out how they have been wronged.

Due to issues surrounding “completeness” of the home at handover, guidance has been extended to suggest that the housebuilder should explain to the homebuyer that there may be “minor items outstanding.” No doubt if there is a written record, this may head off claims from buyers moving into incomplete homes. The definition of “minor items” was not clarified. Builders are guided to inform buyers that they should “give reliable and realistic information when construction of the home may finish”, but housebuilders should “make it clear that they cannot be precise.” So how can it be reliable?

Reference to specific legislation, namely the Construction Design and Management Regulations 2007, has been removed. Too many pesky new homebuyers were no doubt using the legislation to report contraventions to the HSE.

Changes to the Dispute Resolution Scheme

The most shocking changes concern the so-called “Independent Dispute Resolution Scheme.”    From April 2017, a claim cannot be brought until 56 days has passed since first raising it with the housebuilder and no later than 12 months after the housebuilder’s final response. Previously homebuyers had just three months to do this. These changes bring the Code in line with the timeframes set out in the Alternative Dispute Resolution Directive.

The award for “Inconvenience” can no longer be claimed by homebuyers! Considering that in 34 of the 57 successful cases in 2016, the £250 maximum payment was all they were awarded, this is certainly a retrograde step, designed to reduce the payments housebuilders are required to make. The very inconvenience of making a claim using the CCHB is enough on its own to justify the payment. However the good news is from 1st July 2017 the maximum for inconvenience is to be doubled to £500, in line with current best practice in other IDRS. The bad news is any “awards will be made by the adjudicator at their own discretion and consideration and where a breach of the Code has been identified.” Worse, a buyer cannot receive an award for “emotional upset and stress, as awards are to be judged as a matter of fact and on the resulting financial loss caused.” Strangely 4.6 of the guidance states that “home buyers may not receive an award for inconvenience alone” but the case summaries would indicate the opposite!

Finally the onus is now on homebuyers to correctly identify which Code requirement has been breached when making an application for dispute resolution, apparently “to avoid generalised complaints which may have little or no specific relevance to the Code.”

Once the homebuyer accepts an award decision, in writing, the housebuilder must pay the award in full, within 20 working days of the adjudicator’s notification.

One Response to Consumer Code For Home Builders Revised