HBF survey results 2017. After a long and unexplained delay, the Home Builders Federation (HBF), with an income of over £3million (2015), mostly funded by its member housebuilders, finally published its annual New Homes Customer Satisfaction Survey Results and house builder star ratings for 2017 late yesterday. Unlike the rest of us, housebuilders have known their scores throughout the year in real time, thanks to the NHBC online portal providing monthly updates on just how their customers are rating them.

So why the delay HBF?  What possible reason could there have been for requiring a total of 12 weeks, two more than in 2016, since the last customer responses for the HBF survey year to 30 September 2016, were received on the 14 January 2017 cut off?  By strange coincidence, it was the same day that Article 50 was triggered, making it unlikely the poor survey results would get any media attention with all the Article 50 coverage.
Did the HBF decide it was a good day to bury their bad news?

Perhaps calculations were being done to effect an overall more favourable impression of customer satisfaction with new homes. Perhaps there were discussions about including late, more favourable surveys and ruling out unfavourable responses on the grounds of invalidity?  Perhaps the PR spin was more difficult to write this year? Who knows?  Certainly not me.  Even though the HBF Chief Executive Stewart Baseley stated on national radio just last month that he is “a great believer in transparency”, the HBF survey remains a mystery to all but those involved in its carefully scripted questions and the statistical “methodology set out by the NHBC themselves” used in the analysis and validation of the survey by the University of Reading’s Statistical Service Centre.

The HBF survey is used by the industry to  give the impression of high quality new homes when the opposite commonly the case. The HBF’s main aim is to use the survey for “promoting awareness of increases in quality and rebut negative claims on build quality.”  The HBF do not publish more detailed company results as they tell me it “would most certainly have provided food for those who are prejudiced against the industry and simply seek to criticise.” So much for transparency Mr Baseley! The HBF confirm they have “launched a review of the scheme” with the NHBC for no other reason than “to ensure the survey is seen to be as robust as possible.”

In their press release, the HBF say: “Ipsos MORI has recently undertaken a full independent review of the Customer Satisfaction Survey and its processes. The report concludes that the survey approach and processes are consistent with best practice, that it is ‘fit for purpose’ and is a robust measure of customer satisfaction in the new homes industry. The industry will now be reviewing the recommendations made.” Hardly unsurprising given that Ipsos MORI has “acted as a consultant” as far back as 2006! Is this a cynical attempt to head off any likelihood of a truly fully-independent new home customer survey being required as recommended in the APPG Inquiry Report?

The Report from the APPG Inquiry Into the Quality of new homes Recommendation 10: stated:

“Housebuilders should make the annual customer satisfaction survey more independent to boost customer confidence.
“We believe it would boost consumer confidence if the Customer Satisfaction Survey is seen to be more independent of the NHBC and the HBF – bringing in a high profile third party to conduct and take ownership of the research in their name. Furthermore we would like to see more in depth research on consumer trends based on the follow up survey carried out by the NHBC in their nine-month survey. We feel this could provide a real insight into how builders are tackling initial defects and complaints.”

At the APPG Inquiry, the NHBC confirmed that the results of their 9-month customer satisfaction survey were typically 5 to 10% lower than the 8-week survey. No wonder these results are never made public! So much again for transparency Mr Baseley! 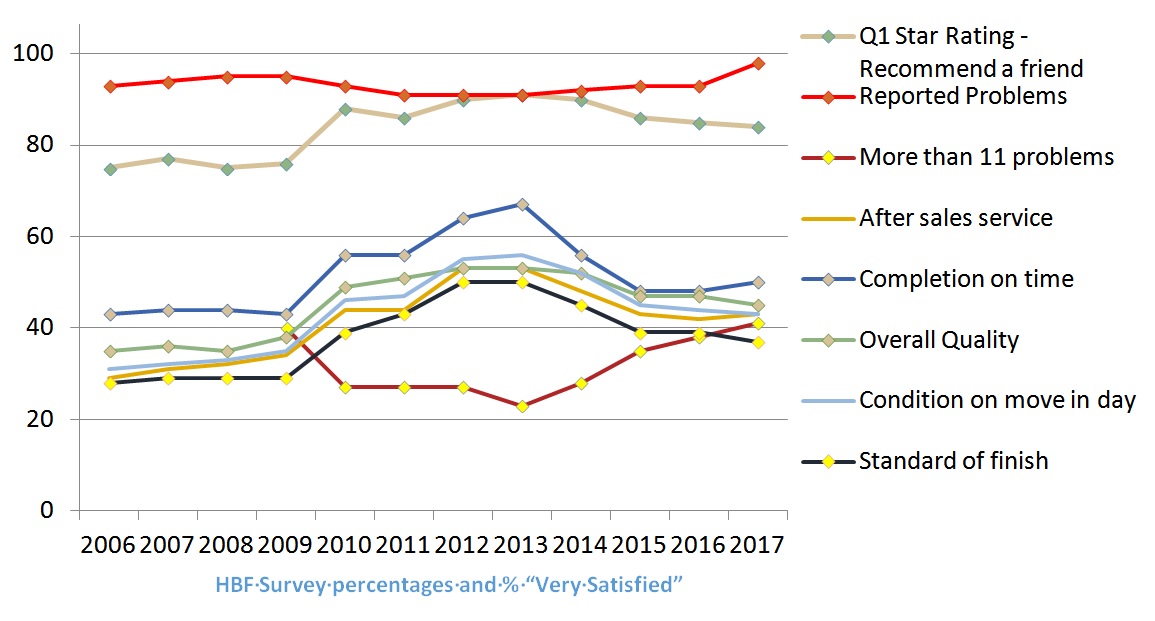 During the survey year to 30 September 2016, the NHBC registered as complete around 140,000 new homes, of which about 80% (112,000) being privately sold and potentially eligible to be part of the HBF customer satisfaction survey. As in previous years, only new homes with an NHBC warranty (around 80% of new homes) will almost definitely (81%) receive a survey, provided that these homes are not rented by buy-to-let private landlords. Out of an approximate potential 112,000 privately sold new homes, the NHBC sent out 90,501 surveys on behalf of the HBF with 52,290 returned, a response rate of 57.7%.

The HBF told me: “Whilst the ‘industry survey’ covers more than HBF members, the Star Rating part of it is just for HBF members. Hence adding up the sample sizes for the Star Rated builders will not get you to the total 52,290 responses. 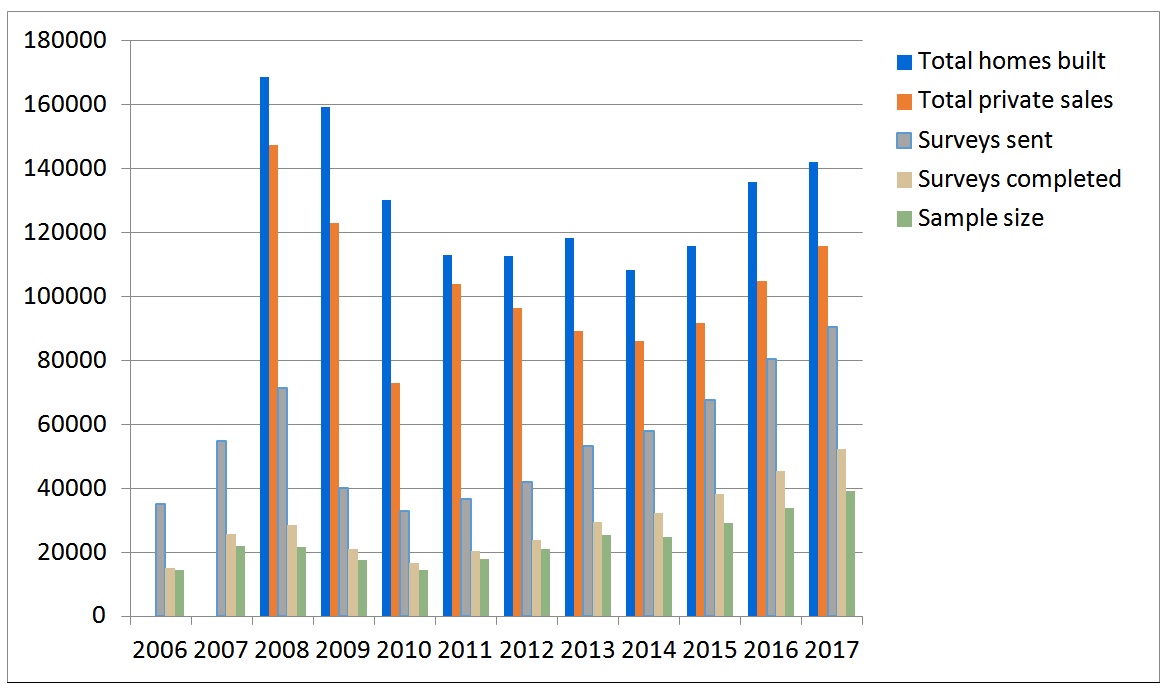 HBF Survey – What it tells us:

The overall ‘satisfaction’ score is 84%, down again for the 4th year running and at its lowest level for nine years!

A record number of new home buyers, 98% (up from 93% last year) that returned the HBF survey, reported problems to the housebuilder (within the first 8-12 weeks) with over four in ten (41%) reporting more than 10 problems – a 3% rise on last year.

Bovis Homes, Britain’s 6th largest house builder by volume, have seen their HBF customer star rating plummet over the last four years, from a 5 star rating in 2013 to just 2 stars today. Considering the company is to spend £7million to repair poorly-built new homes sold to customers over the last two years, it is surprisingly to say the least, that their HBF star rating implies over 60% of the Bovis’ buyers that returned the HBF survey, would still apparently “recommend Bovis to a friend.”

It is questionable how much influence housebuilders are exerting on recently moved in buyers to complete the HBF survey to show them in a more favourable light, despite a great many having incomplete homes, serious defects and overall poor quality homes. From free patio slabs, to £250 John Lewis vouchers and offers to “help” complete the HBF survey – it’s all being done to manipulate a better star rating, against HBF rules but with HBF knowledge.

“The overwhelming majority of new home buyers are happy with their new home” say the HBF “Housebuilders remain committed to delivering the high quality product, and responding appropriately when issues arise” So why do they repeatedly fail to do either so often? Both Taylor Wimpey and Persimmon said they were addressing it over 12 months ago, yet their satisfaction scores are lower.

“Since the survey was launched more than a decade ago scores in all question areas have improved significantly” Not true the number of buyers reporting problems was 93% then, it’s 98% now! In addition the 2006 HBF survey was from a very low base with 57% of builders rated 3 stars or less and a sample size of just 15,000 surveys returned.

“The past 3 years have seen a slight fall back in scores, something the industry is actively addressing.”  I think you’ll find that was the last four years! Whatever the industry is allegedly doing, it isn’t having any positive or apparent measurable success.

Even Secretary of State Sajid Javid said earlier this week: “It’s fair to say that new builds don’t always have the best reputation for quality…..this isn’t a new issue” So why isn’t the government doing anything about it? Even the industry’s own Customer Satisfaction HBF Survey latest results show it’s bad, it’s getting worse and still nothing is being done about it!

In another attempt to paint a more rosier picture of this broken industry, we have the New Home Review (NHR) which says it “provides a unique, independent insight into the quality of new homes being built for sale and the level of customer satisfaction, based on feedback directly from new home owners..”

The survey is supposed to be anonymous but buyers need to add their housebuilder, address and postcode. The website is owned by MD Insurance who run both LABC warranty and Premier Guarantee! They also administer the Consumer Code for Home Builders. This survey cannot be regarded as independent!

The survey published thus far, is I believe, little more than an opportunity for self-justification of yet another industry survey and with just 1,000 surveyed, these results can be regarded as pretty meaningless.

In time, dependent on the average customer satisfaction score, the following ratings are awarded:

So under the “New Home Review” even a dodgy two star house builder will be able to display a “Gold” customer satisfaction rating logo, confusing and deceiving consumers.