Posted on 10/11/2018 by New Home Expert | Comments Off on Consumer Code for Homebuilders – Causing the Confusion!

So much for “Clearing the confusion” the Consumer Code for Home Builders (CCHB) appears to be creating it with its latest webpage purporting to “answer” consumer’s questions following the government announcement last month that a statutory new homes ombudsman was being created.

It would seem that the conclusions in the APPG Report published in July 2015 “More homes Fewer Complaints” appear to be lost on the Consumer Code for Home Builders as it ramps up rhetoric in a battle for its very survival now government has announced the creation of a statutory new homes ombudsman.

Under the headline “Clearing up the confusion”  the CCHB allegedly answers questions from consumers:

“Will the proposed New Homes Ombudsman replace the need for the Consumer Code?

Yet the Consumer Code for Homebuilders ‘clears the confusion’ saying:

“The spotlight is on proposals for a new homes ombudsman once again, and we are actively working with government to understand how the new proposals will work in practice and what rights consumers would have under the scheme. In the meantime, however, there has been some confusion about the role of an ombudsman.

There are clear rules about what an ombudsman can and can’t do. While they can award a remedy (including money) to rectify a problem, they don’t have jurisdiction to fine organisations or apply standards. So introducing a new homes ombudsman may help with dealing with the complaints about existing problems, but it won’t prevent future problems arising.”

Wrong! An Ombudsman can award substantial justifiable compensation to consumers which would amount to a fine in all but name. All adjudication decisions would be publicly available in full with housebuilders named and shamed. By its very existence it would, as the APPG Inquiry Report alluded to, “put pressure on housebuilders to up their game in the first place and spur them on to improve workmanship and increase levels of customer service”

“We want service standards in home building to improve. Training and compliance checks are needed which is one of the areas we focus on.”
[The training being of housebuilders’ sales staff and estate agents – The CCHB specifically does not cover defects, poor quality or warranty issues]
“Furthermore, under the Consumer Code, builders can and have been held to account for not complying with an adjudicator’s decision.”
Really? Where is the evidence? James Brokenshire said the new homes ombudsman would go further and “champion homebuyers, protect their interests and hold developers to account”

This is an industry-led and industry funded Code that would never bite the hand that feeds it.

“Our Advisory Forum advises the Code on policy and action. We also have a fully independent disciplinary and sanctions panel which considers what action should be taken against those builders that breach the Code requirements. For example, one builder was suspended from building any new homes until all staff had been trained on the Code to prevent further breaches of the Code.”
But presumably not many, if any, have had their registration cancelled by the warranty providers. We don’t know because it has never been published!

Does the Consumer Code offer any more rights than existing legislation?

“Unfortunately, the Consumer Rights Act 2015 does not cover purchases of new homes.”   That’s why the protection provided by the Consumer Code is so important – the Code gives buyers of new homes protection if they change their mind or find sales literature misleading or inaccurate.”
Wrong! It does as far as ‘services’ are concerned. However, no consumer legislation at all specifically covers property. The CCHB does not give consumers any “Protection” it is merely a set of requirements that plc housebuilders appear to pay little more than lip service to at best.

“The Consumer Protection from Unfair Trading Regulations 2008 offers some protection.”
Wrong again! Not “some protection” – it covers every area regarding selling property. The CCHB was set up by the industry to prevent housebuilders being reported to Trading Standards and ending up in court.

“However, it requires Trading Standards to take enforcement action or consumers to bring their own action, which can be complex and costly.”
That is specifically why the Statutory New Homes Ombudsman is being created.

“Where issues are identified under the Consumer Code, home buyers can use the Code’s Independent Dispute Resolution Scheme rather than take lengthy and costly legal action through the courts. We’re raising awareness of the Code  because we want more home buyers to make use of this scheme to seek redress where a breach of the Code has been identified.”
The CCHB has existed for over 8 years yet apparently raising awareness is still necessary? A statutory new homes ombudsman would give consumers a right to redress in any dispute with housebuilders, in the same way the Financial Ombudsman Services does with financial providers. The statutory new homes ombudsman would not and must not be, restricted and shackled by specific Code requirements drawn up in collaboration with the industry and its own vested interests.

Why doesn’t the Code deal with more cases?
Good question! Because no housebuilder is going to promote the CCHB as it would make complaints more likely! In addition, the CCHB charges consumers an administration fee of £120 to register a complaint, and in some “successful” cases, this fee has not been refunded.
“We are continually raising awareness of the Code”
It hasn’t improved in the last 8 years! In fact I’ve done more to raise awareness of the CCHB and encourage buyers to use it after they sought my advice.
“so that we can encourage more people to access our independent dispute resolution scheme, including lawyers involved in new home purchases.”
The majority of solicitors being those that housebuilders force or coerce buyers to use even though this breaches requirement 2.5 of the CCHB!
“We are also working on removing/reducing any barriers that may exist to raising a complaint as well as investigating options to raise the maximum award limit.”
This is too little too late. Now consumers will hopefully soon be able to use the new statutory new homes ombudsman:  FREE – FAIR- FOR EVERYTHING

“Satisfaction with new homes has increased according to the Home Builders Federation which surveys new home owners.”
Wrong! Satisfaction has not increased. True it is 2% higher than in the previous years survey at 86%, but still way below the 91% in 2013!

“The latest survey response rate was 62% (57,972 responses), in which 90% said they would buy a new build again. Warranty bodies have also seen a drop in claims raised.”
Spin and PR?  An example of this industry never letting an opportunity for a bit of HBF survey spin pass by! 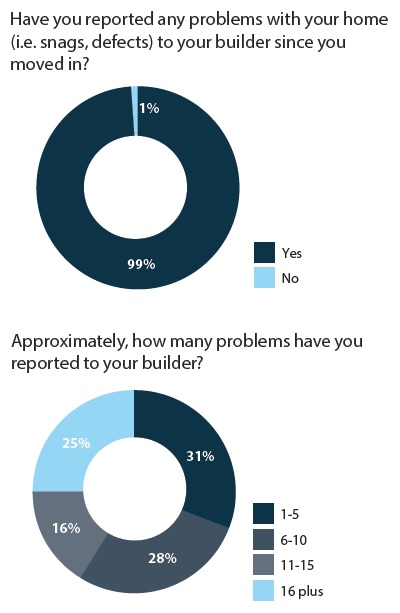 FACT – 99% of new homebuyers reported defects to their housebuilder within weeks of moving in.
FACT – 41% reported more than ten defects!

There is a danger that Government will bow to industry pressure and propaganda like this, placing limits on the effectiveness and powers of the statutory New Homes Ombudsman.

Bearing in mind the government said it “will work with consumers and industry to develop our proposals and publish more details in due course.”  But is this a delaying tactic? Whatever the perceived necessity for “further work”, the housebuilding industry is grasping it as an opportunity to lessen the impact that a statutory new homes ombudsman will undoubtedly have on their businesses.

Any perceived failure, collusion or delay with regard to the creation of the statutory new homes ombudsman will only serve to increase consumers (voters) existing and growing belief that  government is ‘in bed’ with the housebuilding industry, for example some have already questioned the recent extension of  help to buy to 2023, albeit restricted to first time buyers. It is time that for once government ignored the whining of this broken uncaring industry, one that has been running roughshod over new homebuyers for decades ans is ruining lives. This Hansard debate from 22 April 1998 is as relevant today as it was then Why have so many successive governments failed to act? They must do so now.