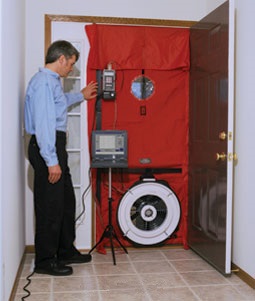 Well you would be wrong! A ‘whistle-blowing’ air leakage testing compliance engineer who contacted me last week said that nearly every home he tested failed the initial test. He said: “I have been air testing for them for the last 12 months and I have to say, at least 90% of all air test ‘passes’ are through bodging” and that he wanted to “shake up the construction industry” believing “the most important part of the new home chain is the end user, not house builders’ shareholders and directors etc.” 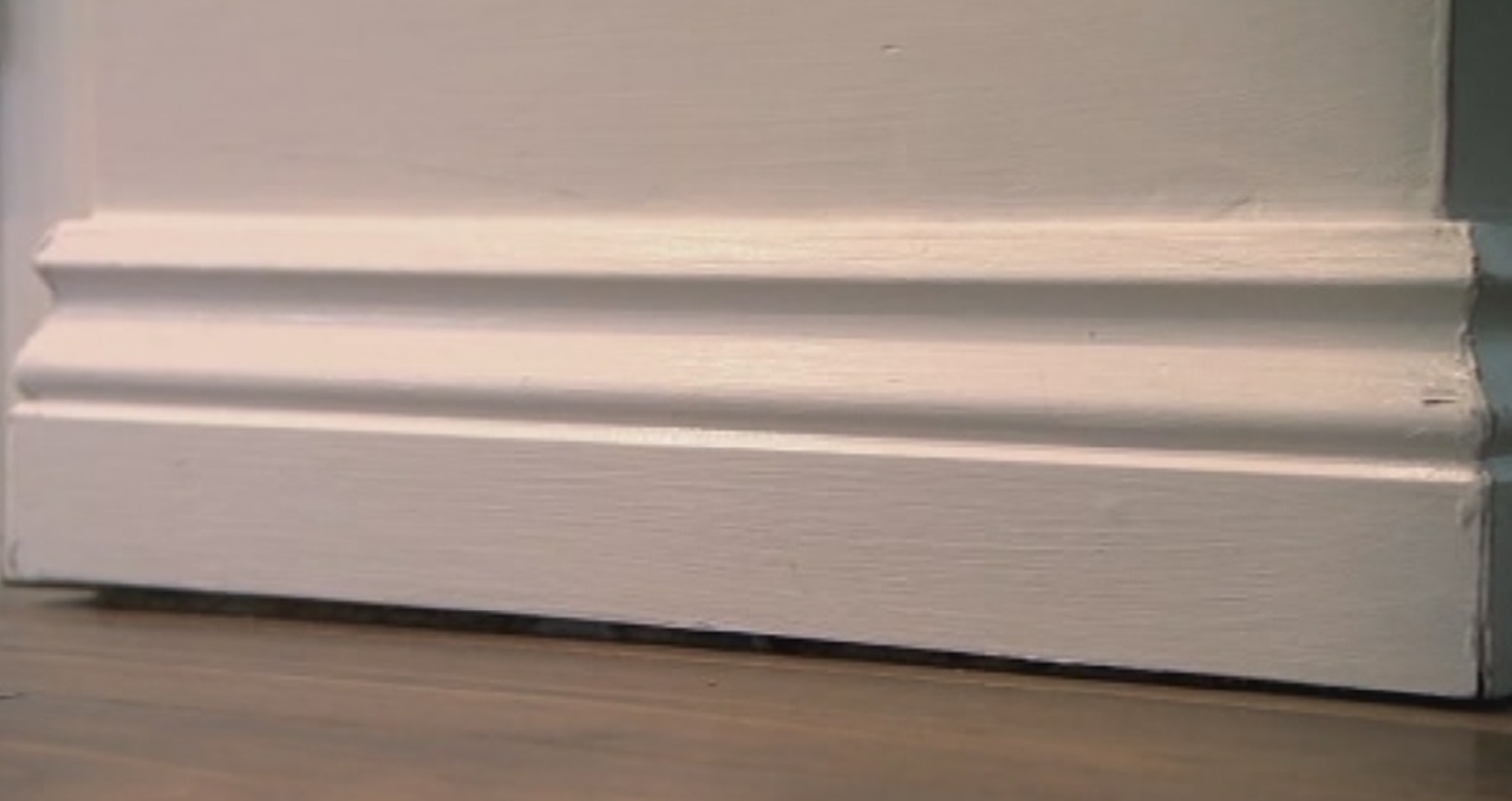 “obviously any new home will eventually pass an air leakage test due to the amount of mastic and expanding foam used everywhere to seal gaps. But what I see on a daily basis – and this is pretty much every house tested – is mastic being applied to the bottom of skirting boards and under kitchen units and baths with larger holes being filled with expanding foam. Then the air test is carried out and it passes. What follows is all the mastic is then cut out before the carpet fitters fit the carpets!

This is standard practice and I feel a total fraud by passing these buildings but it’s what I’m paid to do. I tested one house that failed due to air leakage from all the skirting boards around the house, the builder then applied mastic under all the skirtings, expecting me back first thing the next morning. I didn’t get there until the early afternoon, by which time the carpet fitters had cut it all out! I tested it and it failed due to leakage from the skirting! The builder then re masticed the skirtings whilst I waited, I retested it and it passed. While I was packing my testing equipment away the mastic was cut out again! This is not a one off but something that is going on all the time.”

The problem, as our whistleblower sees it, is that house builders currently perceive air tightness as sealing the plasterboard ‘box’ inside the house. However it should be the fabric of the building, the external envelope, rather than relying on drylining and jointing to seal the home. Even so, it is obvious even this is not being done and NHBC standards not adhered to. 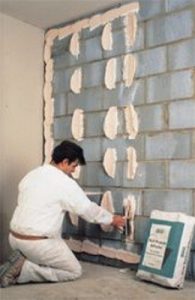 Gap sealing – A continuous ribbon of adhesive should be applied to the perimeter of external walls, openings and services in drylined walls to prevent air infiltration. In addition:

But as our whistleblower confirms “this is virtually never done and so pretty much every house that is currently being built is non-compliant to NHBC standards.”  This give rise to one of the biggest sources of heat loss in a new building, a chimney-effect caused by the void behind the dry lining not being properly sealed, allowing heat to flow freely via convection upwards and out into the ventilated roof void, effectively sucking the heat out of a building. In addition, not sealing the plasterboard to NHBC 8.2 S3 (f) is also a significant fire risk. I spoke to a fireman a few weeks ago who confirmed that the fire service have serious concerns over dry lining because if a fire can draw air through electrical sockets and gaps under skirtings etc, it will rapidly spread through a building behind the dry lining and into other parts of the building.

The whistleblower told me that:

“Most houses scrape through their air leakage tests. If the target is 6.00 for example, then getting 5.95 or thereabouts would be quite normal. It is rare that you get a good test result from most buildings but all the house builders care about is getting the pass and as long as it’s below the target they are happy! I can honestly say that of the 2,000 or so houses and flats I have air tested, only a handful are actually air tight through being properly sealed behind the dry lining. The majority have passed through the ‘sticking plaster’ approach. They are not allowed to use tape to seal gaps (which used to be standard practice) so now use mastic as a ‘permanent’ (temporary) seal and the house building industry accepts it!” 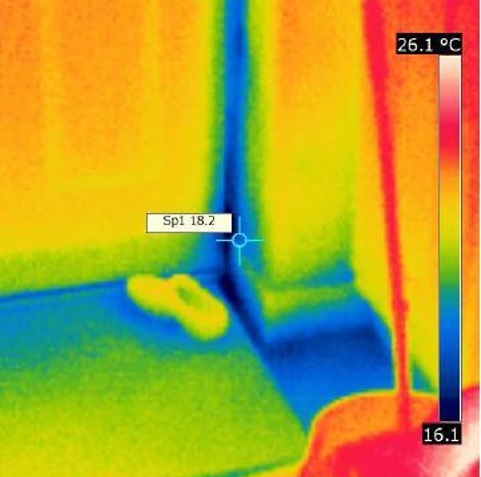 The blue area is the thermal image of cold air leaking into the home around the door.

What should be remembered is that these are the new homes that the site management knows in advance that are going to be tested, yet still they fail. The remaining 50% are not tested at all, presumably built with even less care. The C4 Dispatches programme broadcast in November 2015, ‘Britain’s Nightmare New Homes’ showed a house with large unsealed gaps under the skirting boards (photo above) and, unsurprisingly, the buyers were complaining about draughts and feeling cold. Add into the fact that some of the homes had missing insulation as well, it is ludicrous to suggest, as the industry repeatedly does, that new homes are being built with care to a high quality standard and are energy efficient. If the mandatory tests are being fiddled on site, what is the actual reality? 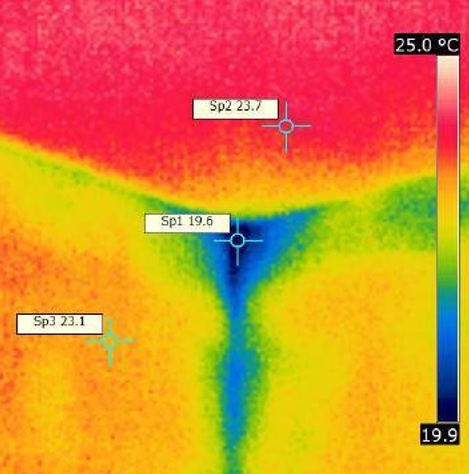 Under the 2010 revisions to Part L, with a Target Emission Rate (TER) improvement of 16% to 40% under the 2010 revisions, it is increasingly unlikely that new homes will be able to achieve the overall targets for energy improvement without significantly improving air tightness. Although the Approved Document L refers to tested buildings achieving 10m³/(h.m²) at a pressure difference of 50Pa as a ‘reasonable level’ of air permeability, in the real world, the actual requirement will be significantly lower to achieve the overall TER. With typical air testing targets improving from 6 to 10 down to 3 to 6.

Since the 2010 revisions to Part L, house builders were faced with a choice of either improving air tightness, or making potentially more expensive improvements to other design and specification factors that influence the SAP calculations such as renewable energy sources etc.

So what are the requirements for air tightness testing of new homes?

On new home developments a sample of each home type is tested. Under the 2010 revision, three tests or 50% of each home type must be tested for air tightness. The definition of types has been expanded to include variations in position (terrace/end terrace house or top/ground floor flat), construction details, size, defined as 10% difference in envelope area and other type defining variables due to design such as, storey heights, the number of doors, windows, flues, soil vent pipes and proximity to unheated spaces (garages, stairwells). In addition, half of the scheduled plots tested must be in the first 25% of completed types. Since 2010, these factors should have significantly increased the number of new homes on each development that need to be air tested. It is thought this could be up from 10 to 25% of homes to 40 to70%. 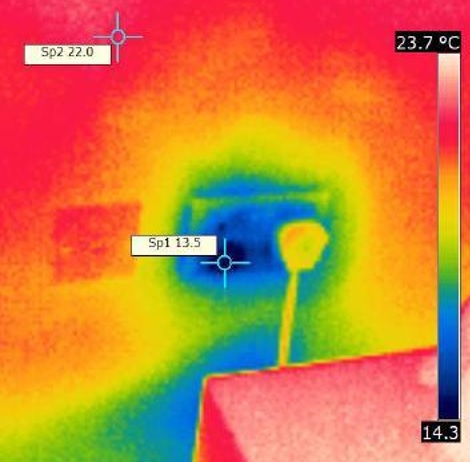 Given that not every new home is required to be air tested, results that are ‘re-used’ in SAP calculations for untested plots of the same dwelling type must have a ‘confidence’ factor applied. This means that the test results must be 2m³/(h.m²) at 50Pa better than the design air permeability allowed in the SAP calculation. In other words, if the target air permeability for the dwelling type in SAP is 8, the tested plot would need to achieve 6, for the result to be re-used for untested plots. The only alternative is to test every home on the site and no house builder or site manager would want to do that!

The NHBC also advises house builders that if there are early test failures, they may be required to test further examples of that dwelling type to restore confidence and show that any and all remedial actions have been carried forward into the remainder of the development. 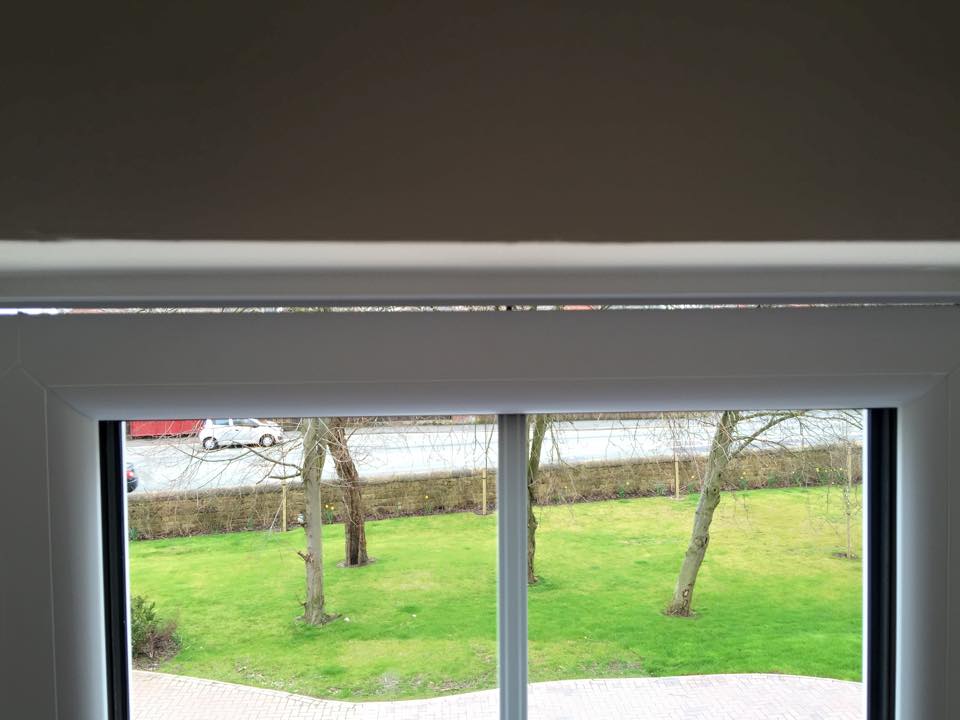 Gap over window in a Persimmon new home

I believe it should be a mandatory requirement that every new home is subject to an air tightness test. The house builders cannot be trusted. The ‘confidence factor’ is non-existent. Air testing of buildings has been a requirement of the Building Regulations for ten years and yet still, homes are built and handed over to buyers with large gaps around doors, windows and under skirting boards, which clearly would not pass an air tightness test and therefore comply with the Building Regulations.

Hear what engineer Paul Buckingham of Sustainable Lifestyles says about the new homes he has seen and tested.