Builders shares crash as Britain votes to leave the EU

It would appear that the house builders’ share price rise since the financial crash of 2008, has been built on the same dodgy foundations as some of their houses are. A business model built on selling sub-standard houses to sub-prime borrowers.

This was illustrated during the first two days of trading following the UK’s historic vote leave the EU. Worst hit in the initial market panic were Banks and shares in the listed house builders. Despite this, some ever-greedy directors used the Friday crash to buy more shares on the cheap, known as “catching a falling knife” and promptly lost another 15%! Taylor Wimpey Non-Exec director Dame Kate Barker, 59, who produced the Barker Review on housing supply in 2004 – which resulted in the industry setting up the HBF Customer Satisfaction Survey two years later, but has failed to have any impact on improving either supply or quality – bought 20,000 Taylor Wimpey shares for £26,953 but the shares closed down 15% leaving her with a paper loss of £3,800. 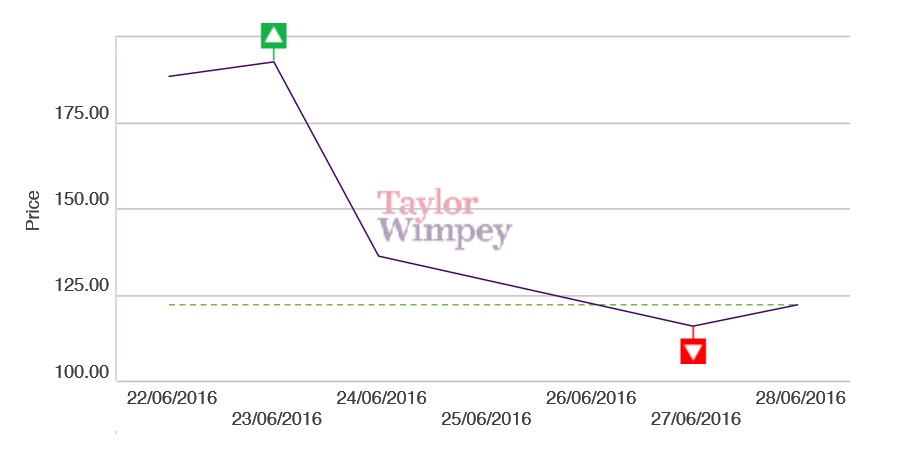 Whilst most sectors have recovered to normality, the same cannot be said for shares in the major house builders. Since Brexit, Crest have fallen a massive 41%, Taylor Wimpey 40% with Barratt, Persimmon, Bovis, Bellway also down 37%-39%. So the pre Brexit share price of the major house builders was not real. It was based on market sentiment based purely on future prospects, rather than a realistic value of the plc house builders. Analysts remain “bullish on the longer term fundamentals” with some expecting fresh support for the housing market following the Brexit decision. Anthony Codling told Money Mail that: “increasing home ownership would be a useful tool for any post-Brexit government to support the argument that the UK is better off out than in the EU. It is our assessment that government support for new-build housing will remain firm.”

So why did house builders tank after the EU Referendum results?

The rationalisation was that Brexit will mean an economic slowdown and a reduction in bank lending, which in turn would hit demand for new homes. The reality is the people have got to live somewhere. Following the result many believe that clarity and confidence in the sector has been reversed, wiping around £8bn from the value of the four biggest house builders: Barratt, Persimmon, Taylor Wimpey and Berkeley.

This calls into question the multi-million  Long Term Incentive Plans (LTIP) for many of the industry’s senior directors. The recent share price collapse demonstrating that their contribution to the huge rise in share prices is negligible at best, being built on and nearly entirely driven by, an inflated housing market bubble, created by low-cost borrowing and a government hell-bent on increasing home ownership at any price for purely political reasons.