Bodge the builder – can they fix it?

Well probably yes, but they will move heaven and earth to avoid doing so. It is at this time of year that I like to produce a light-hearted article, poking fun at the general house building industry. However the increasing  poor quality of new homes and the lack of any discernible after sales service mean that most new home buyers have experiences that are as far from funny as you can get.

Nevertheless, this year I am proud to announce the inaugural winners of the “BODGERS” awards. These are the awards for the very worse in everything housebuilding that I have come across over the last twelve months.

It was difficult to decide in some categories, such was the excellent lack of effort at so many new housing developments across the country. The star bodgers are those that stand out, way below everyone else. Their aim is “diabolical” and this year has been exceptional.

Overall winners are David Ritchtea’s Bovis Homes. “It took some doing” he said, “we thought Persimmon might pip us in some categories but through our uncoordinated approach, lack of teamwork, lazy attitude and a consistent dedication to indifference by all our staff, we excelled in our underperformance.  This year can best be described as totally unremarkable.”

Runner up this year is Pete Bedpan’s Taylor Wimpey. He said “a strong showing on national television and our fantastic PR statements always meant we were going to be close this year. We have put procedures in place that should help us to do even worse in 2016. I would like to thank all the site and sales staff at our Loddon Park and Millbrook Park developments in particular, for their unwavering lack of effort and indifference this year”

On so many sites, Bovis buyers have taken to social media to show the total disdain that Bovis and their contractors have for the people living on their sites – their customers. Road sweepers described as “dirt relocation machines” dust, noise,  Sunday working, even parking in their gardens – Bovis shone out as a beacon of inconsideration this year, a standalone worthy winner! Buyers said: “The Site Manager wasn’t available for comment. The owner of the car said he found my note ‘rude’ –  it was!”

Poor Evelyn Lallo has not lived in her new Taylor Wimpey home in Romsey since June, having moved into temporary accommodation so structural defects could be addressed. She will be spending Christmas in her temporary home whilst Taylor Wimpey carry out: “A programme of remedial works has commenced and we are fully committed to completing them as soon as practically possible. We sincerely apologise for the disruption this has caused and we are taking all measures to ensure that further disruption is minimised as the works are completed”

The what doesn’t kill you makes you stronger award: Winner Crest Nicholson

Not content with the normal snagging defects, Crest seem to be trying to kill this buyer with a live electrical cable hanging out of their bathroom wall!

“We are homebuilding specialists. We’re dedicated to building quality new homes. It’s the core of our business, which means that we know a thing or two about it. We use efficient, effective and consistent processes to ensure that we get the basics right. We have a rich history as one of the UK’s largest house builders, so you can rely on our wealth of experience.” 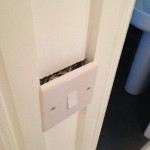 Really Mr Bedpan! Tell that to Evelyn Lallo, Carolina and Roberto Revilla and Luke Mahon and the many #thinkwimpeythinktwice Tweeters!

The how could they miss that award: Winner Crest Nicholson

The screws poking through this stair string are dangerous. But how could so many “trades” not see it or not say anything to the site manager?

Surprisingly, this was one of the few “Bodgers” won by Persimmon this year. Persimmon sales staff attempted (unsuccessfully) to get at least two of their buyers to give the company an emphatic “Yes” to Q1 of the HBF survey, “Would you recommend your builder to a friend” in an attempt to improve of their dire 3 star-rating in the last year’s survey. One was bullied and harassed to tick “yes” another wanted their downstairs toilet taken out and Persimmon offered to do it for free if they gave good feedback on the survey. Neither did!

Close but no cigar!  When near enough is good enough award: Winner Taylor Wimpey Bluebell Crescent!

This rainwater downpipe is clearly not discharging into underground drainage. Probably would still the case even if it was longer!

These “electrics confirmed as not meeting BS7671 Wiring Regulations by NICEIC’s inspectors”  Not much of a surprise there!

Jones Homes: “The majority of items noted are subjective issues. We construct new homes to a high commercial standard within the market in which we trade. Your list indicates that your expectation exceeds this standard but it must be understood that does not validate the issues as defects. Our procedure is that six months from occupation, a list of agreed defects is produced. This list will be what we deem true defects. The standard of your home is consistent with others at Henwood Place and will not be changed as a result of your list”

Forget Hell Drivers, they have nothing on the Bovis deliveries. Dust, mud, dirt and noise. 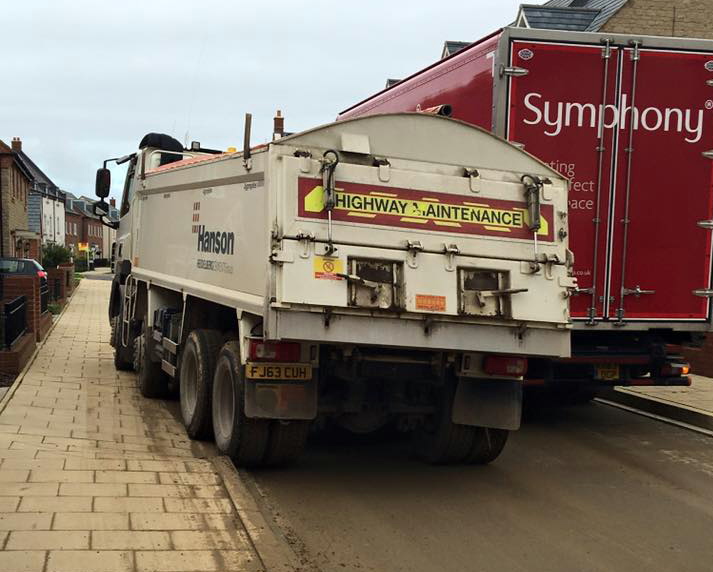 This year, buyers from both winners have been all over social media with their tales of woe. It was impossible for me to separate them. Congratulations to both housebuilders on a job badly done!

This site was also featured on Channel 4 Dispatches with a kitchen full of buyers telling the same sorry story. The most defective homes, poor workmanship and unhappy customers in one place…………well probably.

The “we don’t care because we don’t have to” award: Winner Taylor Wimpey

Even though this was filmed in September 2014,  nothing came close this year! We were led to believe the forklift driver didn’t last long after this and we will have to take CEO Pete Bedpan’s word for it that the trusses were disposed of!  According to a buyer at Taylor Wimpey’s “The Chariots of Dire” development in Andover,  despite ‘Truss gate’, the telehandler operative still works for Taylor Wimpey and they still store roof trusses on the floor!

Despite a new record for the number of homes Bovis built in 2015 – up 8% and a 7% rise in the average selling prices on a year ago, Ritchtea’s company announced in November that operating profits would be “only marginally higher than the 17% in 2014.” This really takes the biscuit!  If a housebuilder cannot make more money in this market, especially with government subsidies like Help to Buy, something is very wrong! In addition, this year has been a pain in the anus horibilius for Bovis, rated just 3 stars in the HBF New Home Customer Dissatisfaction Survey and their site managers received the grand total of None NHBC quality awards.

Bovis were also slated in the Channel 4 Dispatches documentary, “Britain’s Nightmare New Homes” on 16 November. An overall performance this bad, can only be down to appalling leadership from boardroom. 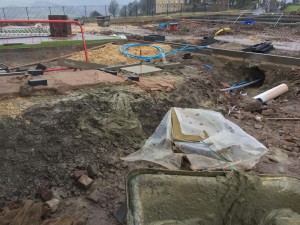 This is the driveway on a Harron House of Horrors development, just one day before the buyer was due to move in. (legally complete!) Needless to say the condition of her home was equally unfinished with a missing basin and an incomplete kitchen. The bathroom was re tiled nine times over 6 months, a shower was not working for months and rats even made a nest in the back of her tumble drier! Overall it took nine months to finish her finished house!

The when you can’t fix it blame the weather award: Winner Persimmon Homes 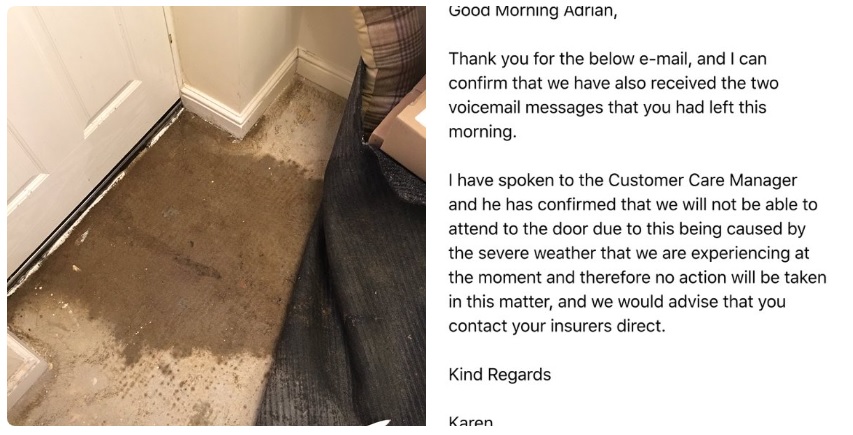 Amazingly, Persimmon were not able to stop water entering this home under the front door. They tried, many times over nearly two years, but mastic just isn’t what it used to be!  In the end they had to concede defeat. The elements were to blame, rather than their defective building. 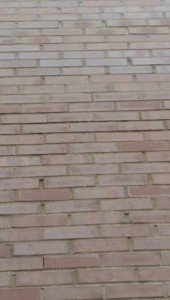 This photo (right) was taken during a snagging inspection. Appalling brickwork by any standards, even for the rubble stackers housebuilders employ! Some vertical joints are 20mm some are non-existent!

Caught out after a buyer’s Subject Access Request (on my recommendation) and also exposed on Channel 4 Dispatches (16 November). If the report (see below) does not say what they want, delete the worst bits or “doctor it for want of a better report”!

Impossible to separate this award as both have made a great attempt in preventing the new home owners getting out of their homes to complain! Total inconsideration. Both not making  much of a stab at keeping the road clean either! 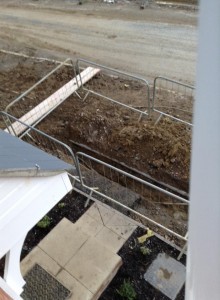 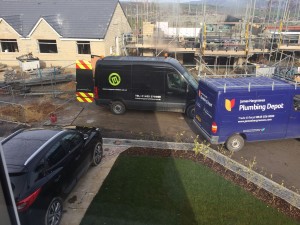 Look no safety! and nice to see both homes each have their own rain water downpipe! 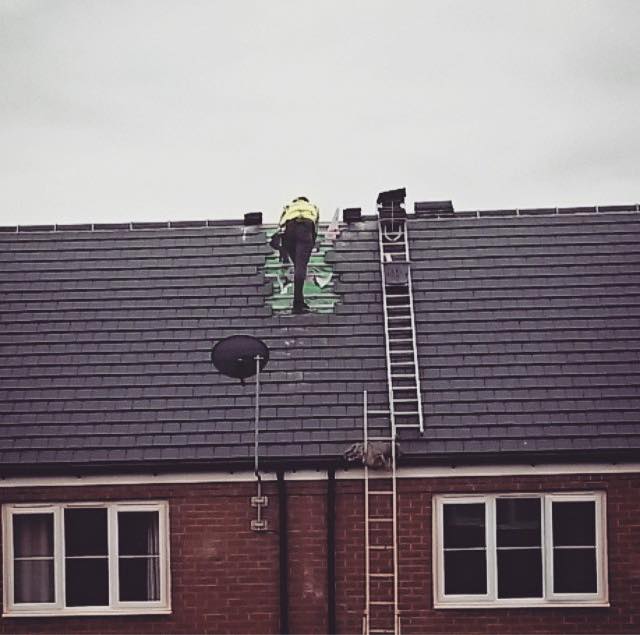 Disclaimer! This is intended as a satirical article for general amusement and entertainment. The pictures and events are real but names, quotations and places may have been changed or made up to protect the guilty as well as those who were acquitted!

All characters appearing in this work are fictitious. Any resemblance to real persons, living or dead is purely coincidental and anyone resembling them is, in all probability, better off dead!

These awards are based on fact. Any similarity with fictitious events or characters was purely coincidental. Seriously though, New Home Expert accepts no responsibility for the accuracy or otherwise of this information. If you don’t like it housebuilders, then get your act together and improve!