Can new home buyers really believe what the house builders claim on their websites and in their marketing material?  A quote from Taylor Wimpey’s own website claims:

“The standard of home building in the UK has never been higher than it is today”       “We’re dedicated to building quality new homes. It’s the core of our business, which means that we know a thing or two about it.”

I don’t believe it!

Even Victor Meldrew would have trouble with this defect!

If this really is the case, how could a defect like this happen? 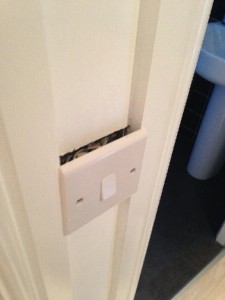 Even worse, why was it not seen by anyone and corrected prior to legal completion?

“Every team has a dedicated Site Manager, who is responsible for making sure that your home is built to the highest possible standard.”

So how and why did this happen?
This defect was created at the first-fix stage. The door frame should have been packed off the wall nib using a timber stud to ensure the light switch would fit between the architraves later on. The light switch may even have been fitted in the wrong position altogether, at the very least the electrician should have noticed there could be an issue during his second-fix. The “dedicated site manager” didn’t check this stage of the build presumably!

After drylining, the 2nd fix carpenter should have realised that the architraves would prevent the switch being fitted properly. The electrician clearly knew that this was wrong as he screwed back the switch, in fact the chances are he would have needed to use longer screws than those supplied with the switch! Then the painter must have realised this was wrong, yet painted the architraves anyway, in the full and certain knowledge that they would be removed to rectify this. Following on, in all probability the cleaner and carpet fitted would have used this switch before handover too. Surely one of these trades would have mentioned it to the “dedicated site manager”?

Finally, the “dedicated site manager”, his assistant and perhaps the contracts manager and sales advisor would and should have all noted this blatantly obvious defect before legal completion, rather than leaving it for the buyer’s snagging inspector to find. Perhaps they all did and no one cared enough to do anything about it!    Or perhaps this is Taylor Wimpey’s “highest possible standard.”

“We use efficient, effective and consistent processes to ensure that we get the basics right” …………….well not this time Taylor Wimpey!

It is hardly one of those minor snags to finishes that are open to aesthetic opinion or interpretation. In fact this defect is potentially downright dangerous. You have to ask how this home passed the electrical installation inspection with the inspector signing to confirm: “having exercised reasonable skill and care when carrying out the inspection and testing, hereby certify that the said work for which I have been responsible is, to the best of my knowledge and belief, in accordance with BS 7671”

You also have to ask how the NHBC inspector could issue a CML final inspection certificate for this home considering this obvious,  potentially dangerous defect?

As it would appear no one cares on this site, what probably will happen now is the carpenter will try and chisel away a notch in the architrave so the switch can be fitted back flush with the wall.

“Quality is at the heart of everything we do”
Well not everything……apparently!