Caught in a trap! Taylor Wimpey  “sorry” for ripping off leaseholders!

Some mistakes are hard to fix.  It is better to be careful – not sorry!
Taylor Wimpey used a trading statement last week to announce their ‘conclusions’ following a review into the company’s historic lease structures. This focused solely on a specific lease structure used from 2007 to late 2011, which provides that the ground rent doubles every 10 years until the 50th year. In doing so, the company created a new asset class that is now very attractive to specialist investors, because it equates to an annual interest rate of 7%. Taylor Wimpey claimed these leases “are considered to be entirely legal.” It remains to be seen whether the charges would be deemed by a court to be ‘fair and reasonable’ Under the Unfair Terms in Consumer Contracts Regulations 1999.

Taylor Wimpey now admit that: “the introduction of these doubling clauses was not consistent with our high standards of customer service and we are sorry for the unintended financial consequence and concern that they are causing.” Surprisingly, Taylor Wimpey says the total cash outflow of around £130million “will be spread over a number of years.” In addition, this only applies to the “qualifying customers subject to eligibility checks” – only those owners who bought from Taylor Wimpey are to be “helped.” 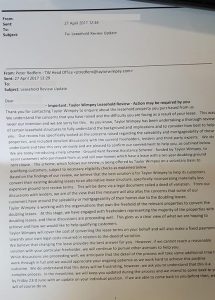 Taylor Wimpey has written to buyers who have complained about their leases with the onerous ground rent doubling clause. In the letter Taylor Wimpey outline its “Ground Rent Review Assistance Scheme” funded by the company, which offers to negotiate on the customers’ behalf with freehold owners for a ‘Deed of Variation’ to “convert existing doubling leases to an alternative lease structure incorporating materially less expensive ground rent review terms.” with Taylor Wimpey covering the financial cost of doing so”.

The letter to buyers concludes: “we believe this is the best answer for you.”

But a look under the bonnet and we find this interesting insight contained in the Seeking Alpha transcript from a Taylor Wimpey Earnings Conference Call on 27 April 2017. In it Taylor Wimpey CEO Peter Redfern concedes:

“this [leases] is clearly an uncomfortable issue” [as they try to]  “work out what’s the best way to reduce the reputation issue for the group – a historic leasehold issue that we think is right to deal with but important to do and get right in one hit, which is what we believe this is”

“In terms of timing, we don’t expect this to result in a significant near sort of immediate cash payment from the group. We think it will be spread over a number of years.

But I think most importantly, we’re confident that this does not impact our ability to follow through on our dividend plans to potentially increase our dividends in 2018″

When asked specifically about the issue of leasehold new houses Redfern said:

“You’ll be aware there’s lots of noise around leases more generally. But our own use of leases on houses, for instance, is lower than many in the sector. And also, what stands out about this is the scale and the fairness. What’s interesting in terms of whether it becomes a wider issue which we think is unlikely, is that we haven’t had a single legal claim, including on these doubling ground rent provisions. Because people did have independent legal advice, the contract is very clear, this isn’t a case.”

Did they really Mr Redfern?  Many were forced, coerced, or otherwise financially incentivised to use housebuilders’ recommended solicitors, never a good idea and can hardly be described as “independent legal advice.” In fact a class action for negligence is being prepared against new homebuyers’ solicitors.

Many were told by sales staff, they could buy their freeholds for a few thousand in 2 years time, only to find the private firms that bought the freehold were asking £30,000 or more. Many were told, incorrectly, that leasehold house was virtually freehold. Ellie Taylor posted on the National Leasehold Campaign Facebook Group: “We were told ‘it doesn’t matter because it’s a 999 year lease and you will be long gone by then’ – I found out it was leasehold just before we signed to reserve, I went outside to call my Mum as I was concerned and they [sales staff] made out like I was being daft.”

“I still think if we’d have done a really good diligent job, we should have seen the issues at that point in time. But we didn’t. But we’re looking back now with the benefit of hindsight in a different world”

Asked if this was being done to “preempt government taking this on board and championing the home owners cause”:

“we think this specific lease class, with hindsight, isn’t quite fair. I don’t actually think it’s that likely that government will take retrospective action on that. And clearly, if we thought that was imminent or likely to happen, we wouldn’t be making this announcement today. We’d wait and see what that is. But how we read that situation is, that is unlikely.”

It is clear to me from the transcript of this broker teleconference, that Peter Redfern has no intention of ever helping those that bought leasehold new houses to obtain their freehold, either at reasonable rates, or at no cost as part of a compensation measure. Indeed, it is clear Taylor Wimpey do not even believe they have done anything wrong selling new houses on a leasehold basis. It is to be hoped that those in government are not taken in by this token gesture (‘Ground Rent Review Assistance Scheme’) which only relates to ground rent doubling every 10 years and nothing else. Even that, Redfern predicts, will take a “number of years” to complete.

It is my opinion that Taylor Wimpey have broken ranks, in an attempt to claim a non-existent moral high ground over other miscreant house builders. Peter Redfern, no doubt in consultation with other housebuilder CEOs, who unlike Taylor Wimpey, have no plans to stop selling their new houses on a leasehold basis, made this move to give the impression the industry was contrite and doing something positive. Indeed the Leasehold Knowledge Partnership  said on their website that Sir Peter Bottomley and Jim Fitzpatrick MPs and co-Chairs of the APPG for Leasehold and Commonhold Reform, “were contacted by Taylor Wimpey last night [26 April]. They were invited to discuss the issue with CEO Peter Redfern at 10am” [27 April] following the announcement and ahead of the firm’s AGM an hour later.

This statement has the potential to pull the wool over the eyes of those in parliament who quite rightly, want the sale of new houses on leasehold banned and those leaseholders for whom it is too late, given an opportunity to buy their freeholds either at reasonable prices, or be given their freeholds by their housebuilders. Obviously the housebuilding industry does not want this. It will be very expensive, albeit still affordable, given the excessive profits being made and obscene levels of LTIP bonuses being handed to CEOs – most of which has only been achievable because of the Help to Buy Scheme.

The Taylor Wimpey statement has enabled the industry an opportunity shed some positive, pre-emptive light, on what has been and continues to be, nothing short of a national scandal, described in parliament as the “PPI of the housebuilding industry” that has been allowed (and currently perfectly legal – but not morally right) for many years. An industry-wide hoodwinking of new homebuyers, many buying with the taxpayer-funded help to buy scheme, now own virtually worthless leasehold houses.

The report of the All Party Parliamentary Group on leasehold reform, coincidentally published on the same day as Taylor Wimpey’s announcement stated:

There is not a single reason why legislation cannot be brought very soon after the election, to ban the sale of leasehold new houses.  Perhaps each party should make this pledge  in their manifestos.

It was mooted by Sajid Javid  that Help to Buy could be withdrawn for builders not selling on “fair terms” in his speech on 28 March 2017:  “Helping builders to get building“:
“So I will look to ensure Help to Buy Equity Loans are only used to support new build houses on acceptable terms. This will send a serious message to the building industry: if you want the government to help you build and sell homes, you have to sell them on fair terms.”

It is time and it is right that Help to Buy is withdrawn.