There is now increasing incidence of new homebuyers reporting the issue of weak or soft mortar in the brickwork of their new homes. The solution if carried out, could in the worst case scenario, involve the demolition and rebuilding of the entire home, perhaps even all the homes on a development as it is also highly likely that most, if not all, of the houses were built with the same weak mortar. Needless to say both housebuilders and the warranty providers don’t want this and obstruct and frustrate new homebuyers who report weak mortar at every turn.

I first came across the weak-mix mortar issue when a foreman bricklayer I knew said he was taking down all the brickwork on a completed Bryant Homes site in Ashington, West Sussex in 2003. It would seem the mortar is question had ‘insufficient cement’ and just a quarter of the required strength.

Ten years later, I was contacted in October 2013 by an owner of a Bellway new home built in 2004 at De Haviland Way, Skelmesdale Lancs WN8 6DG. It had weak mortar and other serious structural issues. In April 2014, the then homeowner thanked me for my support, help and advice I gave regarding his NHBC warranty claim and said he could not discuss it further with me. The home, bought for £159,995 on 26 November 2004, was finally resold for £132,500 on 30 November 2016 – at a loss of £27,495 over 12 years in a rising market! I can only presume that the home was blighted, hence the knock-down price! 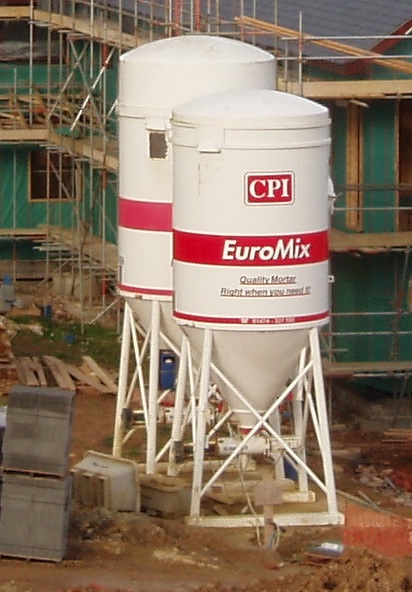 Since the days, when hod carriers were entrusted to mix mortar in the required proportions, often simply half a bag of cement per mixer batch, most housebuilders have switched to using pre-mixed mortar, delivered dry by tankers to site silos. All the hod carrier has to do is turn on the water tap, switch on and out comes ready to use mortar.

This has advantages over the sand and cement being mixed on site. The primary one being that all mortar would be of consistent strength, colour and workability. “High quality constituent materials are used to produce the perfect dry mix under rigorously quality controlled conditions.” And, according to the manufacturers, the availability of many different colours, any of which would be consistent throughout the building or development. The new silos offered flexibility, with easily adjusted water content to compensate for wet bricks and blocks and the ability to “mix” only use what was needed avoiding waste on site. The new electrically-powered silos meant less noise, fewer deliveries and tidier sites. Above all, the mortar was Quality Assured being manufactured to BES 6001 and BS EN 998-2:2003, and “guaranteed unrivalled quality and technical expertise.”

In recent years there have been a growing number of new homebuyers discovering the mortar in their brickwork is crumbling and “powdery”. This is not confined to a single housebuilder or a particular geographical area. The weak mortar, which can be easily brushed or lightly scraped from mortar joints is being washed away by the effects of weather and is evident in many newly-built homes across the country. The solution (the most commonly one offered by both housebuilders and the NHBC warranty) is to rake out mortar joints to a depth of 25mm and re-point using new, sometimes higher strength mortar. However, the mortar not replaced would still be of inadequate strength. More importantly, the wall ties connecting the inner and outer skins of a cavity wall will be structurally less effective. Unless the external mortar is different, it is conceivable that the structural load-bearing walls of the inner skin, hidden from view, would also have been built using the same weak mortar. During a debate in the House of Commons regarding quality in the built environment, the then APPG EBE chair Jo Churchill MP for Bury St Edmonds, used the example of: 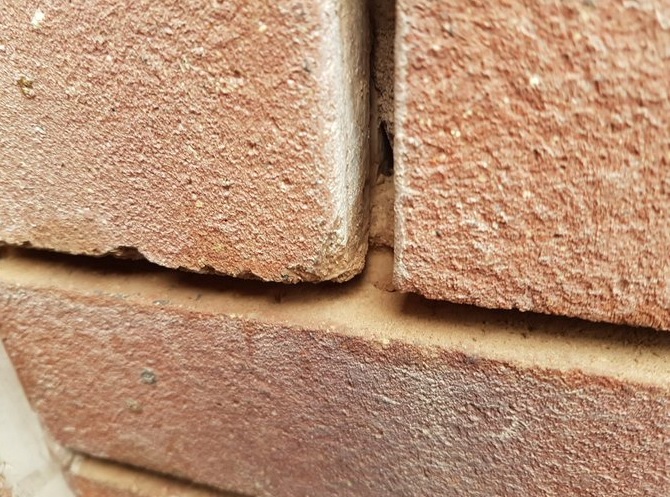 No doubt in response to the growing incidence of weak-mix mortar.

Is the weak mortar weak caused by a site issue?

The first line of defence used by mortar manufacturers is to claim the mortar was subject to circumstances on site beyond their control, resulting in the mortar being weakened. This can be caused by the following:

1) Building masonry walls in low or freezing temperatures and/or not protecting walls from freezing overnight. “The agent lets you build at 0 degC if the NHBC is not in”

2) Mortar is damaged or weakened by the use or overuse of brick acid cleaners and/or jet washing.

3) Mortar is remixed on boards after the initial set and has started to harden.

4) Walls are built in dry hot weather and the dry bricks suck water from the mortar before it is fully hydrated.

5) Too little or too much water added during mixing.

This is often further substantiated by their own in-house factory production control compressive strength testing data. It should be pointed out that this mortar is mixed and cured in ideal, controlled conditions, which could never be realistically exactly replicated on a building site.

However, I have seen independent test results which have analysed the mortar mix proportions and these reports categorically prove that in this instance, the mortar has insufficient cement and does not meet the NHBC mortar mix technical and performance standards.

As previously mentioned, the first line of defence (claim mitigation) is to offer a 25mm repointing of joints in the affected areas. If the homeowner refuses, the NHBC have a “mortar expert”; 85-year old Barry Haseltine, who the NHBC dispatch to buyers’ homes to carry out “independent assessments”. I am given to understand he is kept very busy!

I possess one of Haseltine’s reports and it makes very interesting reading. For a start, the disappearance of the mortar is being credited to “erosion” not caused by insufficient cement. He says:

“the surface [of the mortar] is somewhat dusty, and when rubbed can allow sand to be removed.”

“For the last 20 years or so, cement has become a complicated subject compared with the relative simplicity that existed when we had Ordinary Portland Cement and a small number of specialist mixtures for example masonry cement”

“It is a regrettable fact that mortar has become a potential problem with regard to durability in recent years, probably linked to the use of cements that have considerable proportions of additions which reduce the active cement in the mixes.” 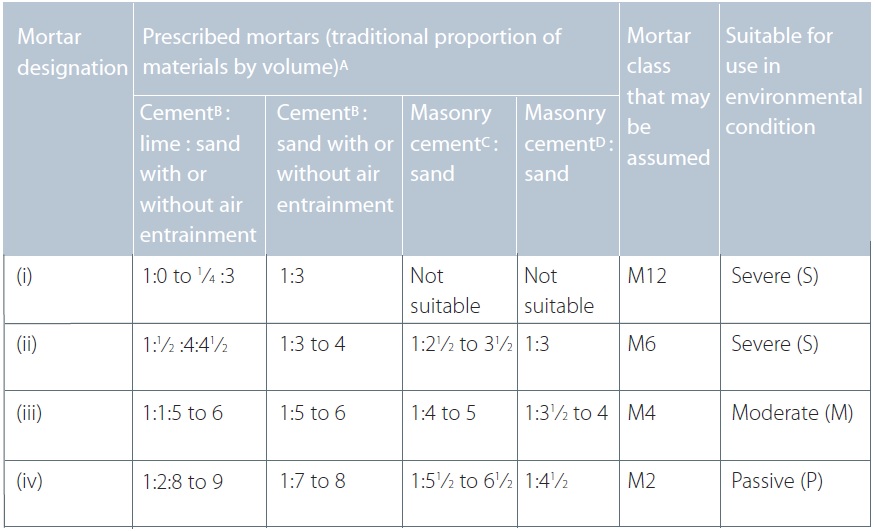 “The mix proportions that are listed in the table of analyses should not be used to judge the compliance of the mortar with the masonry codes that cover the strength of masonry, or with the Building Regulations simple rules, since the mortar supplier has supplied a design mix not a prescribed one.”

“Unless one has evidence that the strength of 4N/mm2 (M4) that defines a designation (iii) mortar has not been achieved on control tests, there can be no objection to the mortar or the strength of the walls in which it has been used. I do not think that the reduced amount of cement in the mix, as illustrated by a comparison of the analyses with the prescribed cement sand mixes in standards, will have any deleterious effect on the structure of the house, even if such a comparison were to be accepted as being relevant”

A “prescribed mix” is one where the mortar is made in pre determined proportions the properties of which are assumed from the stated proportions (recipe concept). A “design mix” is a mortar whose composition and manufacturing method is chosen by the producer in order to achieve specified properties (Performance concept)

So in summary, the NHBC’s go-to mortar “expert” doesn’t “think” that a significant (26.6%) reduction in cement quantity in a mortar mix would structurally weaken a wall or reduce its durability to withstand the extremes of weather!

Can Barry Haseltine from Jenkins and Potter be considered independent?

The Jenkins and Potter website states that “We have formed a number of close associations with housing developers after many years” – in my opinion, it is a moot point that any of their consultants could be considered truly independent of the housebuilding industry. Barry Haseltine was Chairman of the CEN Eurocode Committee for Masonry and chairman of the British Standards Institution Code of Practice Committee for the design of masonry and its sub-committee responsible for the structural masonry codes. His own reputation and credibility could be called into question if it can be shown that he is wrong. It could therefore be argued it is in his own best interests to protect the housebuilders and in doing so, ring-fence his own reputation.

It is ludicrous that mortar tested by the manufacturer’s in a controlled environment to above a 4N/mm2 compressive strength can be sold as an M4 Design Mix mortar and deemed equivalent to a mortar designation (iii) Prescribed Mix with a cement : sand ratio 0f 1 : 5.5 when the laboratory proved cement content is circa 26% less than the mix proportions required in the NHBC warranty standards require.

What is the cause?

This has yet to be fully established, there are several theories which I will explore in detail in my follow up article. However, whilst mortar suppliers are free to put whatever they like, in whatever proportions, as long as they can achieve a compressive strength of 4N/mm2 in their own tests and the warranty providers appear indifferent to requiring the specific mortar mix proportions in their standards and banning cement replacement additives such as GGBS, the number of homes with weak mortar can only continue to rise. Until there is an industry recognised compression test for mortar in-situ, new homebuyers will be forced to accept sporadic repointing as a “solution” to  defective weak mix mortar, with potentially catastrophic consequences, not only for many thousands of individual homeowners, but the overall housing supply.
Further reading:
What is happening to masonry mortar –  (Oct 2017) by Graham True of GFT
Use of Ground Granulated Blastfurnace Slag (GGBS) in mortar (Jan 2008)
Best practice- potential site problems 2014  – Mortar Industry Association

Tweets by @NewHomesExpert1
This entry was posted in New Homes. Bookmark the permalink.