Why we need to start building council houses again.

It is not in house builder’s interests to build the 200,000 new homes required each year.  Not only would it use up their five-year landbank supply, it would also mean new house prices would fall as would house builder’s profits.  So house builders voluntarily building more homes for motives other than increasing their profits is about as likely as a turkey looking forward to Christmas!

It is also a fact that house builders do not have sufficient skilled labour and the necessary management skills to build a combined 200,000 every year, year in, and year out.  So if, as has been the case for the last 25 years, house builders continue to drip-feed new homes on to the market what is the solution? 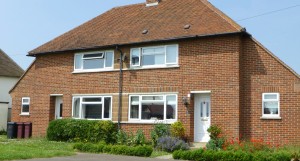 The answer lies in a return of publicly funded council house building on a national scale. Not with Housing Associations building more social housing just for those on benefits, but by allowing councils to use their cash surpluses, currently earning little if any interest, to build council houses on their own land. It worked well in the fifties and sixties; millions of council homes were built to replace so-called slum housing. But they were not classed as ‘social’ housing – in fact they were quite the opposite. They were homes for everyone – especially for workers on middle incomes. Getting a council house was based on how long people had been on the waiting list. There was no rationing and no stigma. They were new homes on estates with genuinely mixed communities. Good, well designed quality new homes with decent sized gardens for working families. Homes where people would want to live for most of their lives. But this golden age came to an end with the advent of Right to Buy and Housing Acts in the 1980’s which prescribed who could access social housing and who could not.

So now is the time to start building council houses again

A council house building programme could be partly funded with a surcharge of say £1,000 for every new home sold by every UK house builder.  The likes of Barratt, Persimmon and Taylor Wimpey would pay in around £37 million a year between them.  They could hardly complain given that the taxpayer-funded subsidy Help To Buy has increased their profits by over 50% and more during the last twelve months. This would not increase the price of new homes as builders always price  to the maximum the market can stand anyway,  price too high and they won’t sell!

The government needs to create a state-owned national house builder, – a sort of NHS for house building – minus the bureaucracy!  As Britain’s largest house builder, it would be able to negotiate and command significant discounts with the supply chain on a national basis.  The operation should be organised from a central office where standardised designs for each house type from bungalows for the elderly to four bedroom semis for families.  These designs would incorporate the latest best practice and cost effective technology.  The cost of building each house type could be also accurately calculated and development budgets managed. Individual councils would use carefully vetted building contractors, (not privately owned plc house builders!) to build their new council homes.  A full time resident clerk of works on each site would ensure the quality and specifications were met.  Thousands of new council houses could be built every year, regardless of the housing market bubble-crash price cycle.  Those building, would have regular uninterrupted work with an end to the current “feast or famine” experienced by those trades working for the private house builders who only build in the good times and all but shut down in recessions.

Last week, Ed Miliband said Labour would transfer £30bn of funding from central to local government to “begin reversing a century of centralisation”.  Think how this money could be used to enable councils to build council houses again.  The new council homes should only be for working people, those that can demonstrate they have worked full time for the last three years.  Priority should be given to couples who have been married for at least two years and those with children – not unemployed, never worked, single mothers on benefits.  A decent home for a reasonable affordable rent would be an added incentive for work.  To replace the stock of council owned housing;  Right to Buy would need to be scaled back, perhaps with a pre requisite 10-year residence before the right to buy was acquired.

Building council houses is the only way that Britain will ever build 200,000 new homes a year again.  The private national house builders have their own agenda, it is time to break their cartel and start building publicly funded council houses for decent working people.