Home » Do the NHBC give Quality Awards only to site managers building high quality new homes?

Do the NHBC give Quality Awards only to site managers building high quality new homes?

Posted on 27/06/2014 by New Home Expert | Comments Off on Do the NHBC give Quality Awards only to site managers building high quality new homes?

The NHBC 2014 ‘Pride in the Job’ Quality Awards have recently been announced and it is clear that most of the major house builders have not improved the quality of the homes they build.  See the house builder league tables here for awards in 2014 and previous years.

Last year Barratt made history with 102 of their site managers winning awards for quality. This year, despite building more homes on more sites, Barratt won 13 fewer awards – 89 in total, followed by Taylor Wimpey with 70 – just two more than last year!

The remainder of the largest house builders won just a handful of quality awards, much as they did last year – Linden 5, Bellway 29, Redrow 13, Crest 12, Bovis 4 and Berkeley 12. The biggest shock was again Persimmon, the largest house builder by market value, winning a pitiful 8, even less than the meagre 13 their site managers won in 2013!   Clearly this company has problems and appears to be indifferent to the quality of the homes it builds.

It is becoming an increasing concern that the NHBC hand out awards to certain builder’s site managers regardless of their personal management ability or the quality of homes built on their site.

Last year, the NHBC gave Taylor Wimpey’s Richard Crawford a Quality Award for his site at The Chariots in Andover.  Since then, many unlucky homebuyers have discovered  their homes were not only poor quality, but in some cases also potentially dangerous, with various electrical faults despite passing an “inspection” and incorrectly wired boilers.

One buyer (full story here) has taken over 35 days off work to allow various trades access to his home to fix and repair the defective workmanship. So far (8 months on) CEO Peter Redfern has failed to get personally involved and has not even replied to the owner’s many detailed letters.   Yet this site manager won an NHBC Award for “Quality” for this site! 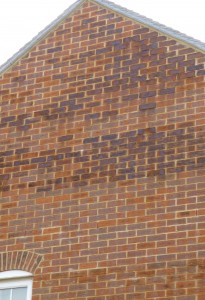 Last Friday, I visited a Barratt site at their Canal Walk site near Chichester and was appalled by the poor quality on site, most notably the low standard of brickwork.

Yet despite this being clear for everyone to see, the site manager, Aaron Painter, was one of the 89 who won an NHBC Quality Award at Barratt.  These are called Pride in the Job Awards, yet this site manager clearly has no pride at all, otherwise he would have done something about the “brick-banding” after the first house was built.  He could have instructed that the black bricks were not to be used and arranged a brick doctor to tint the house already constructed. Instead he apparently did nothing despite it being an NHBC standard that bricks are selected from several packs to avoid this exact situation.   NHBC standard  6.1  S10 (d) states “Unless bricks have been blended by the manufacturer, bricks from different batches should be mixed to avoid colour patching”    So how can a site manager that is not even building to NHBC standards, win an NHBC Quality Award?  So much for “Pride in the Job”!

“The ‘Pride in the Job’ awards are extremely important to NHBC and to the industry. The judging process involves site managers being assessed against a very wide range of site management skills from technical knowledge and consistency in the build process to leadership and organisational skills, and achieving the highest possible standards and best practice in house building.   It acknowledges the extra effort the site manager and his team have made”

However the NHBC also said:       “This judging process does not guarantee that every home built on a site will be without issues and our 10 year Buildmark warranty and insurance cover is there to provide protection to the homeowner should problems arise following completion.”

So you have to ask the question:  Are the NHBC PITJ quality awards given for building quality homes, or because winning site managers have taken  NHBC inspectors and their area managers out for lunch once a month?   Is the NHBC “judge” more impressed by a tidy apparently well-organised site office with a noticeboard full of charts programmes and schedules all perfectly level and evenly spaced out and a nice cup of coffee, rather than the quality of workmanship in the actual homes people will be buying?  It would appear so.   Taylor Wimpey and Barratt in particular, have got the “recipe” for winning the majority of NHBC awards every year and this cannot be wholly down to the “quality” or number of sites they have.  Perhaps using the NHBC for Building Control services makes an award “more likely” or perhaps the use of other NHBC services such as training or safety inspections also plays a part in the decision process.  What is certain is that it is no longer all about quality on any particular site.

The NHBC Pride in the Job competition appears to be seriously flawed and is misleading to homebuyers.  It is now time it was revised to ensure only the best site managers building the best new homes win, not those working for certain house builders on certain sites,   regardless of good quality construction and best building practices on their site.