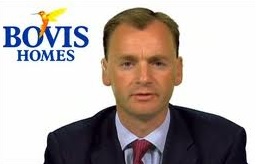 Regardless of what fictional character Gordon Gecko once said, “Greed for want of a better word is” most definitely not good!  As details emerged earlier this week of David Ritchie’s pay-off. The former chief executive of Bovis Homes “resigned” on 9th January 2017 after a profit warning and ahead of the scandal of buyers being paid up to £3,000 to legally compete on homes that were not finished, and the announcement by Bovis that they had set aside £7 million in February to redress complaints.

Laughably, Ritchie who formally left Bovis on 28 February, will even receive a £55,000 bonus next month as part of last year’s scheme which “may be subject to clawback for a period of two years”. Ritchie will also have continued use of his company car as well as medical insurance and life cover until 8 January 2018. Unbelievably, if this wasn’t already extremely generous for an individual that presided over a performance that has brought his company to the brink of being taken over by a rival, Bovis are even paying “a contribution in respect of legal costs and a further contribution towards outplacement counselling.”
(which apparently helps displaced employees manage the transition from one job to another!) Not that Ritchie needs to find paid employment anytime soon!

The details of Ritchie’s payoff being disclosed on Bovis’ corporate website.

It is to be hoped that investors who will be given a vote on Bovis’ remuneration report at its annual meeting in May will voice their displeasure at the payoff although the LTIP was approved by shareholders in 2014.

Critics have accused Bovis of paying a ‘reward for failure’.

Oliver Parry, head of corporate governance policy at bosses’ business group the Institute of Directors, told the Daily Mail:
“This doesn’t look good and it doesn’t do the reputation of British business any good.” He said: “Investors deserve to understand what senior executives are being paid at the point of stepping down.”   A spokesman for Bovis told the Daily Mail that the company had made a “prompt and full disclosure.”

Stefan Stern, director of the High Pay Centre, told the Daily Mail:
“This is a reward for failure. This sort of pay-off reflects the way in which executive pay is trapped in a world of its own. No one else would expect to receive this sort of payment after having underperformed in a job.”

The row over Ritchie’s pay adds to the mounting backlash over excess in the boardroom. Given the circumstances and the amount involved it is to be hoped that Ritchie (47) will do the decent thing and make sizable donations to homeless charities such as Shelter and perhaps donate his time providing accountancy services ‘pro-bono’ for charities.

Meanwhile yesterday, 58% of shareholders of house builder Crest Nicholson voted against the company’s remuneration report at the annual general meeting, revolting over executive pay as the company slashed profit targets that determine performance-based bonuses for its directors.

Shareholders were vented their anger at a pay policy that will enable chief executive Stephen Stone to more easily receive a £811,737 bonus on top of a basic salary of £541,158. A total of £1.35m which  would take a site manager 27 years to earn.  Crest’s chief operating officer Patrick Bergin could be on track to trouser an extra £562,500, adding to his £375,000 salary.

While the vote against the pay proposals was not binding, it indicates growing discontent at executive pay and dissatisfaction among investors.

This entry was posted in New Homes and tagged bovis, house builders, quality. Bookmark the permalink.