Posted on 24/03/2018 by New Home Expert | Comments Off on Government Consultation – Apathy, Ignorance and Lack of Publicity

Government Consultation: New homebuyers – why you should be bothered!

So after four years of campaigning for the government to set up an independent New Homes Ombudsman, new homebuyers finally have a golden opportunity to tell government to set one up. Given the 100,000 or more that buy a defective new-build home each year, (98% reported issues to their housebuilder within a few weeks of moving in, 41% reporting 11 or more “problems”) you would think new homebuyers would be ‘chomping at the bit’ to complete the government consultation! 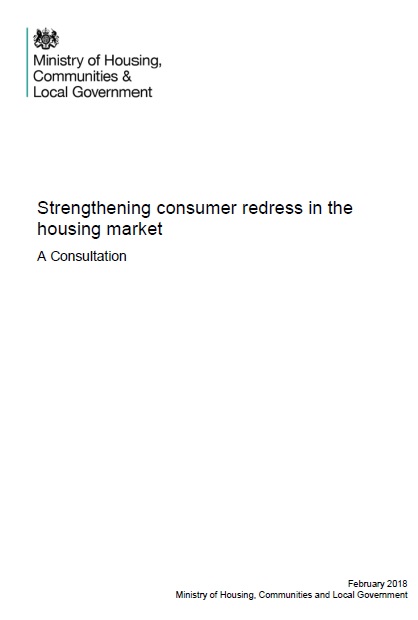 But here’s the rub; the government are not publicising this consultation  at all. National newspapers have given it scant coverage of the consultation since the 18th February 2018 press release. Last Sunday, The Observer provided the only coverage of this important government consultation in a national newspaper since the press release. Even so, it only briefly touched on it saying “The government is consulting on proposals that include a single housing ombudsman to handle complaints” but didn’t say the views of new homebuyers are being asked for.  On 10 March, I contacted 35 journalists from national newspapers, just four replied! One had already written the story above, another has plans to cover the topic, PA to the Editor of the Mail on Sunday said she would “forward it to the news desk” and another forwarded my email to her editor as she will be abroad until April.

The Consultation “Strengthening consumer redress in the housing market” was “announced” on a Sunday, 18 February 2018, in a ‘blaze’ of publicity that was little more than a regurgitation of the MHLG press release which soon fizzled out faster than a budget supermarket firework on a wet night. Has lazy journalism replaced investigative journalism? Has anyone actually read the Consultation documentation?

But even if this government consultation was well publicised and made clear that the public should take part, it looks to me that the vast majority of new homebuyers wouldn’t be prepared to spend a few minutes to complete it. There are times, when I feel I am the only person trying to do something about defective new homes and errant housebuilders. Those that buy new homes, apart from a very few, in the main seem happy to do nothing themselves apart from seek help and moan about their new homes on social media. Ignorance and apathy? I don’t know and I don’t care!

I emailed around 400 new homebuyers (those that had previously contacted me for help and advice) asking them to complete this consultation, one replied saying: “Why would I help you out? I’m sorted now.”  Point to note you are not “helping me out” you are helping yourself and all future new homebuyers! On a personal level, I will never have a need to use a New Homes Ombudsman, as I would never buy a new home!

“has anyone…”    “Can anyone….”    “Does anyone….”    “Question about….”
“I was wondering if anyone could help me…..”   But very rarely: “This might be useful/help others”  Ask not what other new homebuyers can do for you, but what you can do for other new homebuyers!  But how many members of these various Groups will actually complete this consultation? I would be astounded if it was even as high as 1 in 20!

The previous government consultation “tackling unfair practices in the leasehold market”  stated: “The response to those plans, published here  was overwhelming. We received a staggering response with 6,075 replies” [5,336 private individuals of these 4,489 being leaseholders], demonstrating the strength of interest in this issue.”  This due to a large degree by very active Facebook Campaign Group with over 10,000 members and the support and backing of a registered charity with full-time employees, The Leasehold Knowledge Partnership vigorously promoting that Consultation in the press.

So government considers a response of a little over 6,000 is “overwhelming”. Imagine what the response would be if 15,000 (around just 10% of those that buy a new-build home every year) completed the current government consultation and demanded an independent, stand-alone, new homes ombudsman be set up by government.

Just when I think it couldn’t get any worse – two ‘copy cat’ consultations are been launched:

The Chartered Institute of Building (CIOB) consultation is asking members and other industry professionals for views on some of the exact same questions of current government consultation on strengthening consumer redress in the housing market. A spokesman from the CIOB told me:

“we are in support of a New Homes Ombudsman as we highlighted in our response to the APPG for Excellence in the Built Environment Inquiry. What we are trying to do by asking members a select number of questions in the survey is to get some data together to put forward in our response. We are not duplicating the work just that in our experience, members maybe too busy to respond or simply not know the process. Therefore, many CIOB members often share their views with us so we can formulate a response. Of course, what our members say isn’t gospel and we act entirely in the public interest.”

Hot on the CIOB heals comes yet another Consultation, this from Ombudsman Services that only last month declared said it would no longer offer “a broken solution to a broken market“.  But it would seem is now touting to be the single “Housing Ombudsman” that is Sajid Javid’s preferred option. Ombudsman Services new survey, “Building Balance”, has been launched, asking for views on a topics such as whether there should be a single ombudsman, and whether the current system is muddling for users. Well the number of simultaneous consultations certainly is!

The RIBA has a “Building on Quality” consultation. Point to note: to build on something it has to exist in the first place!

At least this one from What Mortgage comes with a chance to win £500 (now there’s an idea Mr Javid!)  but this looks to me to be little more than an exercise to harvest consumer data that can be passed to housebuilders!

In all likelihood,  the housebuilding lobby will get what they want, an ineffective ombudsman, which the industry has control over, that consumers don’t know about (just like their ineffective Consumer Code for Home Builders) and it could well be buried within a wider “Housing Ombudsman” which government would prefer. Great job Jibber Jabber!

If new homebuyers don’t know about this consultation, or worse can’t be bothered to complete it, nothing will change.

This entry was posted in New Homes and tagged APPG Inquiry Into Quality of New Homes, new homes ombudsman. Bookmark the permalink.