Home » Strengthening consumer redress in the housing market – A Consultation.

Strengthening consumer redress in the housing market – A Consultation.

This 8-week consultation, hot on the heels of the ‘behind closed doors’ sessions of the APPG EBE Inquiry to “look into the potential and detail for a New Homes Ombudsman”,  announced by Sajid Javid on 29 November 2017, was finally launched on 18 February 2018 and is indeed taking place “in the New Year” It is titled “Strengthening consumer redress in the housing market” but is it what it seems?

Is Javid fully committed to giving beleaguered new homebuyers a statutory New Homes Ombudsman? This being paid for by a levy on housebuilders as recommended in the APPG EBE strangely titled Inquiry report “More Homes – Fewer Complaints” published as long ago as 13 July 2016!

Since this Inquiry report, we have had three housing ministers, yet none of them has seen fit to implement any of the APPG Inquiry report recommendations. We have reviews, considerations, discussions with stakeholders and all manner of excuses and delays. In the meantime, I have encouraged new homebuyers to write to their MPs and demand a new homes ombudsman be set up. So now 20 months later, we have yet another ongoing APPG EBE Inquiry (with any report due August at the earliest with October more realistic) and Javid’s 8-week Consultation ending on 16th April 2018.

The last housing 8-week consultation regarding unfair leasehold practices was from 25 July to 19 September 2017. The government response, dated 21 December 2017, (91 days after that consultation ended) indicted that just 5,336 private individuals took part. The Facebook National Leasehold Campaign Group has 10,000 members! It is to be hoped that at over 15,000 new home buyers will take part in the current consultation and leave the government in no doubt that a stand-alone new homes ombudsman is badly needed. Given previous experience, the government response can be expected around 16 July 2018.

So let’s go through the nitty-gritty, of the Consultation notes, page by page:

So first point to note on page 4 is “Any policy changes brought forward as a result of the consultation would be subject to appropriate assessment”
A ‘Get out of Jail Free’ card for housebuilders?

It is clear from Javid’s Foreword that he personally favours a single housing ombudsman. But a Housing Ombudsman already exists, so is Javid saying it isn’t working effectively? Is he using the furore surrounding defective new homes as a way to force through root and branch changes to the existing Housing Ombudsman? It would appear that the current proposal he favours is to combine the various existing ombudsman dealing with housing issues into one and add a function within that for new home buyers to seek redress against their failing housebuilders. Page 25 states that “primary legislation would ultimately be required to create an entirely new organisation to combine most of the existing housing redress functions and potentially also new functions” (a new homes ombudsman?)

On page 6 we find another ‘Get Out of Jail Free Card’ this time for the warranty providers as consumer redress would still remain with the Financial Ombudsman Service. Issues with new homes can be both technical and complicated and not suitable for an assessor at the FOS to rule on even though a new home warranty is in essence, an insurance product.

A great deal of this consultation scope relates to tenants, social housing, estate agents, park homes and finally, buyers of new build homes (page 9) where it states that if the housebuilder fails to resolve issues and “the buyer disagrees with the warranty provider’s decision, or no action is taken the consumer can find they have no route to redress.”

Apparently “The Consumer Protection from Unfair Trading Regulations 2008 are enforced by Local Trading standards Services” (page 10). So can we expect a prosecuting for this blatant and proven breach?

Finally, on page 19 we have three paragraphs under the heading “Buyers of new build homes”  there is an acknowledgement that “there are gaps in protection and there needs to be more robust protection for homebuyers in the first two years after purchase.” It also states that “We [the government] are working with the Home Builders Federation and warranty providers to address these issues and we want them to continue to drive improvement.”  The clear reality is there has been deterioration in the last 20 years. The HBF will always seek to protect the interests of their member plc housebuilders and warranty providers will protect their own interests, both ahead of those of consumers.

Question 2 answer “A person who has recently bought a new home” This is important as it will show the number of new home owners that took part in the consultation and demonstrate the need for a specific new homes ombudsman.

Questions 6 and 7. If you tick “The Consumer Code (IDRS)” please also give your opinion of how satisfied you are. Around 61% of new homebuyer’s cases with the CCHB adjudication scheme succeeded since it started but awards averaged just £1,498 – just 18% of the amount claimed! The government may try to claim the CCHB IDRS is effective even though the previous APPG Inquiry found it “limited in scope” and “does not appear to us objectively to offer consumers a wholly satisfactory form of redress”

Question 8 answer “there are gaps in redress”
That is, there is no independent, government-appointed new homes ombudsman!

Question 9 has no option for a New Homes Ombudsman. Those completing are advised to select “Other” and write “new homes ombudsman” in the box

It is vital that the new home disputes are regarded as a separate issues from the existing housing ombudsman that deals with tenant disputes etc so,
Question 11 should be answered “NO – different sectors require different practices.”

Question 13 should be answered “Yes”
All ombudsmen should publish decisions as it is in the public interest to do so.

Question 14 “Time to deal with a complaint” is more difficult, so answer -“it depends on the complexity of each case” as specialist testing and reports may be required for new home issues.

On page 16 we learn that the Housing Ombudsman awarded compensation in a third of cases ranging from a ‘massive’ £20 to £8,195 – hardly suitable for new homebuyers! Most common awards across the three existing property schemes were stated as a paltry £50 to £500. Clearly miserly awards like these are not going to force housebuilders to improve what they do and don’t do!

Question 16 “Sanctions” Answer – “Financial award greater than £25,000” as justifiable, meaningful compensation must be available for the new homes ombudsman to award. Be wary of “Do you want to continue with the survey?” Click “YES – continue to section 5 addressing the gaps” otherwise you will miss the crucial questions for new home buyers!  Was this a cynical attempt by government to avoid responses from new homebuyers? 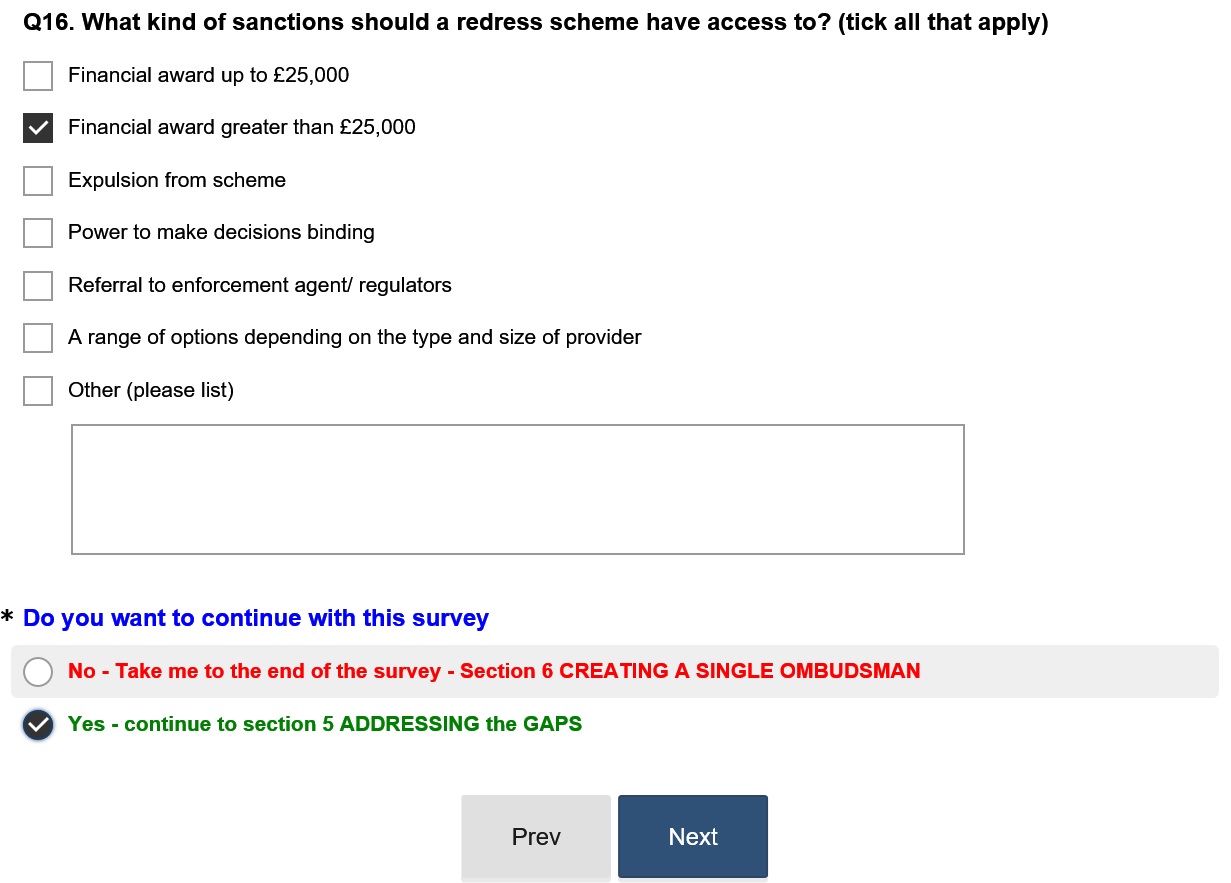 Question 17 Answer “Yes” adding in the box that “the CCHB does not cover disputes regarding snagging, quality and defects in new homes or any warranty issues or disputes with warranty providers.”

Questions 18, 19, 20 and 21 are crucial for all new homebuyers and need your responses as shown below: 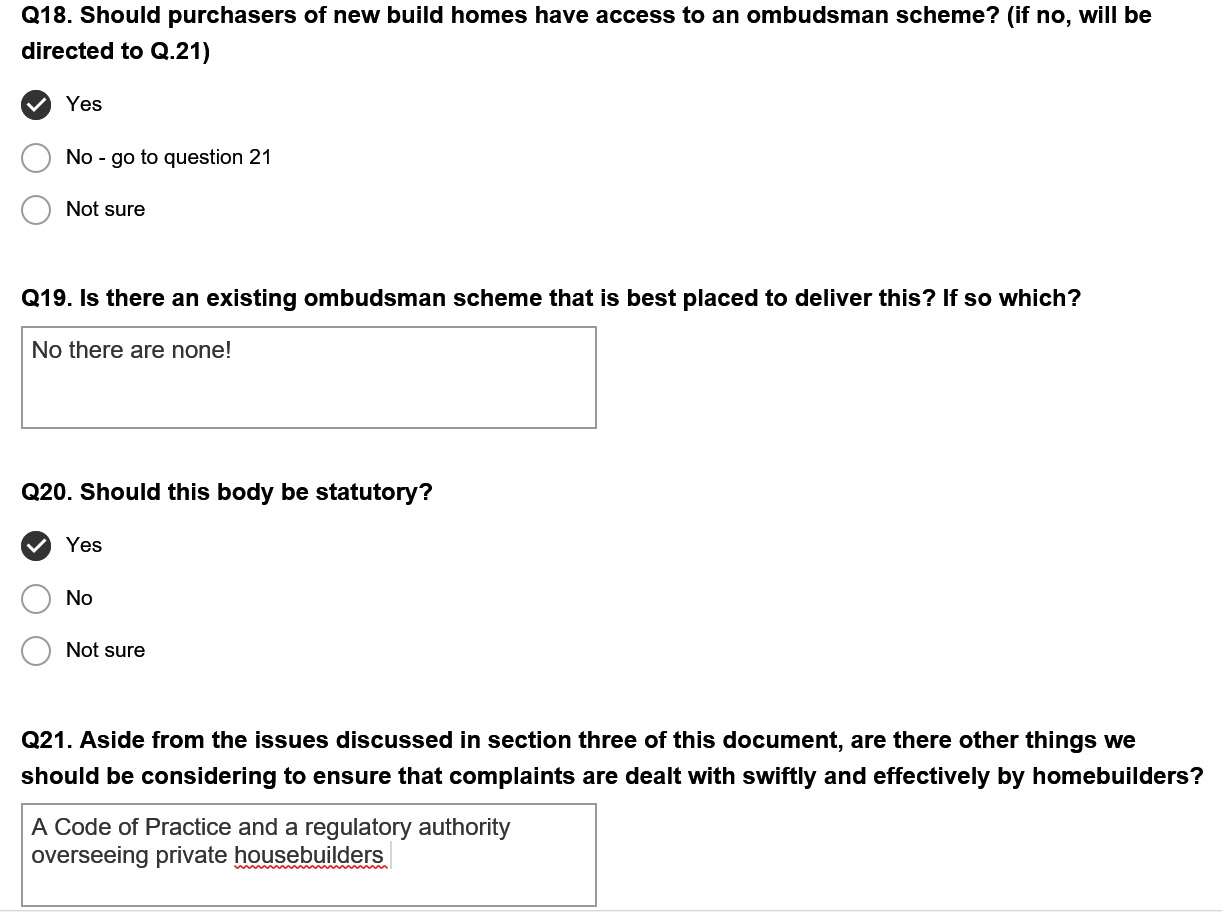 Question 30 is perhaps the most significant question as it is the only opportunity for a response to ensure that a new home ombudsman is separate from a general ‘one-size-fits-all’ “housing ombudsman” that Sajid Javid appears to prefer. 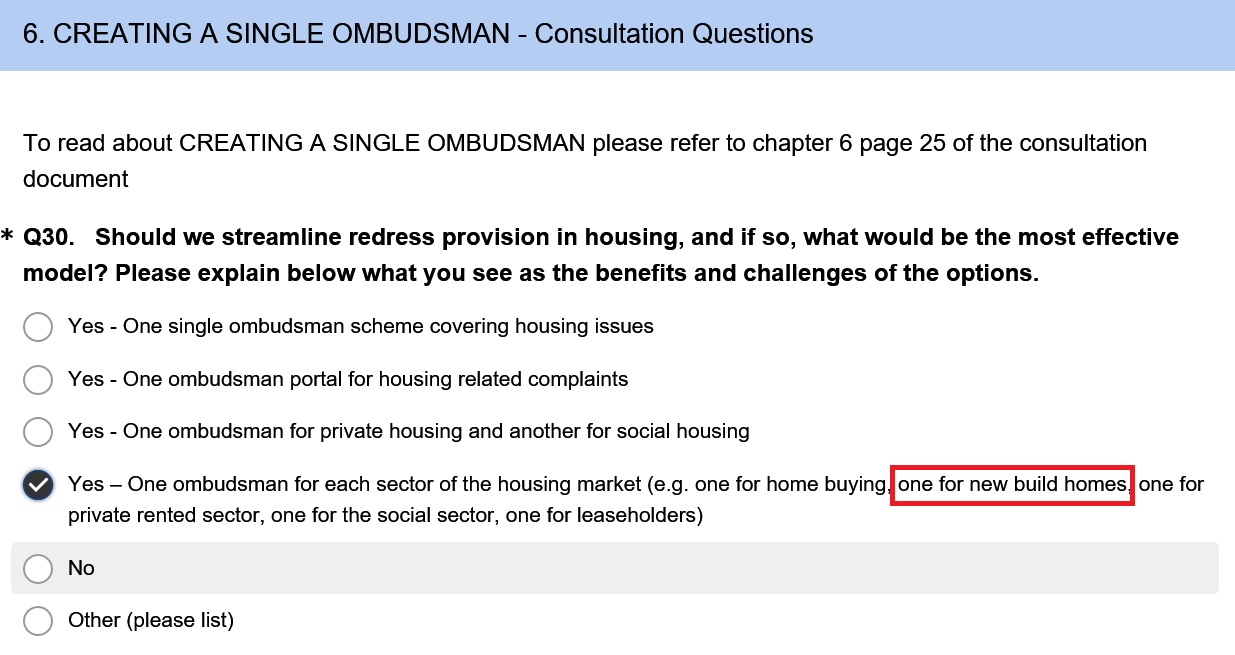 It is imperative that the link to this consultation is shared via social media with all those that have bought a new build home. It needs a high response from new homebuyers to force government to sit up and take note and set up an independent new homes ombudsman as soon as possible.
https://www.surveymonkey.co.uk/r/Housingredress

If such a new homes ombudsman existed, all new homebuyers would be able to claim justifiable compensation, not just get their defective new homes rectified eventually! This is in everyone’s interests, those that have bought a new home and those that will in the many years to come! It is just too important to ignore.

3 Responses to Strengthening consumer redress in the housing market – A Consultation.