Home » HBF claim the number of new homes built is being under-reported by government.

HBF claim the number of new homes built is being under-reported by government.

Posted on 23/09/2016 by New Home Expert | Comments Off on HBF claim the number of new homes built is being under-reported by government.

After repeatedly failing to meet government housebuilding targets, the Home Builders Federation (HBF) now claim, quite amazingly, that the government’s official figures for new home completions are wrong and understate the number of new homes being built by its membership.

So just as the government looks to blame the large housebuilders for its own failed pledge to build 200,000 new homes a year, – “1 million new homes by 2020” – which was clearly never going to happen, the housebuilders’ barking Rottweiler [HBF], growls its disapproval by stating in every news outlet and construction publication within the influence of its PR machine, some nonsense about not all new home completions are being “counted” in both the official quarterly and annual figures published by the DCLG.

The HBF claims that up to 30,000 new home completions are not counted and included in the government’s official figures. The HBF blame “poor returns from local authorities and a flawed methodology” for the failing to record every new home built.

“House building has increased significantly in recent years but the continual publication and use of inaccurate statistics is painting a negative picture that is undermining the progress being made in tackling the housing shortage.

The Government’s housing policies and the industry are [sic] delivering, and it is incredibly frustrating that official statistics are not reflecting what is happening on the ground but instead presenting an open goal for critics.”

The HBF also claim that “Net Supply of Housing ‘data series, which is only published once a year and is drawn from more reliable sources more closely linked to the numbers Local Authorities use for determining their Council Tax Base show that more than 181,000 homes were added to the housing stock in 2014/15 – the last numbers available – of which 155,000 were new build, up 20% year on year. An analysis by the Home Builders’ Federation showed Whitehall’s quarterly and annual House Building Statistics under-report new build completions in 75% of local authorities.”

But according to the HBF’s own headline-grabbing “Ghost towns” report, 20,650 of the 181,300 “new homes” they claim were built in the year to 31 March 2015, were change of use to residential; 4,950 were from conversions and 630 were other net gains. Reducing the HBF claimed figures still further were 10,610 net demolitions! Even by the HBF’s own flawed figures and miscalculations, the number of actual new homes built by housebuilders was a maximum of 144,460 in the year to 31 March 2015. However, as can be seen in the DCLG graphic below, the latest official figures state 139,030 for new home completions for the twelve months to 30 June 2016, only 6% higher than the previous twelve months, with   just 61% being built by Britain’s 15 largest housebuilders. Furthermore, the latest figures show new home completions  at 18% below the 12-month peak to 31 March 2007 (168,640). 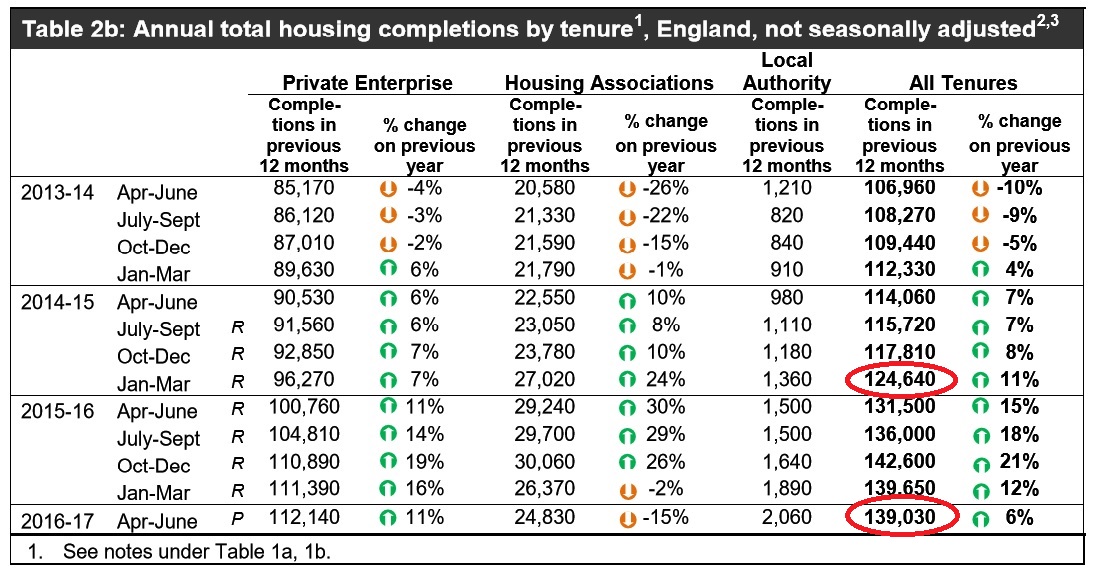 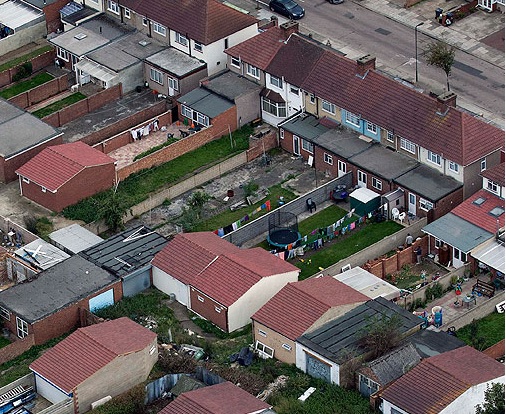 New home completions? The HBF would probably like to count these too!

How can the HBF can lay claim to have made “progress to tackle the housing shortage” when fewer new homes are being built right now than were being built in 2007? What next? Perhaps the HBF will want the new home completions figures to include new bedsits, care home bedrooms, park homes, static caravans, hotels, B8Bs and perhaps even London’s new-build shanty homes, they are after all, new and homes to someone! Anything to distract from their memberships’ landbanking and profiteering from a housing shortage it causes and maintains by drip-feeding the supply of new homes to increase prices [and profits] through scarcity.

Instead of trying to spin housebuilders’ underperformance of both quality and now quantity, the HBF would do better to focus on what their industry is not doing and seek improvement, rather than repeatedly trying to make the unacceptable performance of this industry appear better than it is in reality. Still at least this made a change from their usual lobbying PR about planning: rules, delay, and cost; skills shortages and land availability.

This entry was posted in New Homes and tagged HBF, house builders, landbank. Bookmark the permalink.