It has been nearly three months since the APPG Inquiry Report Into the Quality of New Homes was published along with its recommendations on 13 July 2016.

After some not inconsiderable enquiring to the APPG MP’s, I was contacted by Helen Hayes (pictured below) last week who has kindly updated me and confirmed the current situation: 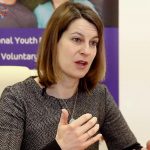 “The APPG’s inquiry report has now been published and has been presented to the government for a response.  Oliver Colvile has met with the Prime Minister to discuss it, and I understand that the initial response was quite positive.

The APPG awaits the government’s formal response, and when Parliament resumes sitting we will seek to chase this if it is not provided in a timely manner.  It is not within the power of an APPG to implement the recommendations of the report, as this is a matter for the government, and the setting up of a new Ombudsman would require legislation which it would be for the government to introduce – even if the government takes up this recommendation, which I hope they will, this would take some time to progress through Parliament. 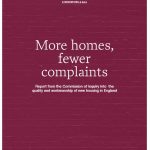 The MP for Dulwich and West Norwood also told me that APPGs are open to any MP and that I may wish to encourage my own MP, Andrew Tyrie, to become a member of the APPG EBE and to attend APPG meetings so that he can represent my views directly. In addition, MPs can enter into the ballot for Private Members Bills, and could choose to progress the setting up of a New Homes Ombudsman in this way if they are successful.

So progress is slowly being made towards the setting up of a New Homes Ombudsman and the implementation of the APPG Inquiry Report recommendations. It is refreshing to know it is not being kicked into the long grass. On a personal level, I would hope that MPs, including my own Andrew Tyrie, bring up the subject of poor quality new homes and the setting up of a government-appointed New Homes Ombudsman for discussion at the Conservative Party Conference in Birmingham during this week.

It is beholden on all new homebuyers, that they now write to their MP and insist they actively support the full implementation of all the APPG Inquiry Report recommendations, especially the setting up of a New Homes Ombudsman. Moaning on about their homes and house builders on social media is not going to change or achieve anything! In the meantime, defective new homes are injuring children!