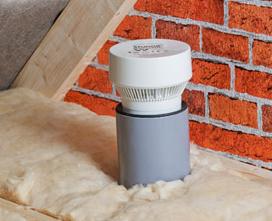 Cara later confirmed that workers from Persimmon have finally turned up and completed the work although she is still waiting for them to redecorate and supply and fit the shower they agreed as a form of compensation.

Quite frankly this is not good enough. Mr Eynon’s confirmation of design compliance with regulations was not the issue. It was a defective or ineffective Durgo that was the cause – something that would (and should) have been picked up during the mandatory air testing of the foul drainage pipework. In any event, the air admittance valve aka Durgo, should have been the first thing Persimmon examined and it would have been a simple matter to replace this in the loft space. As for the delay being caused by “organising suitable contractors” surely these were already working on the site?

Another Persimmon buyer told the Evening Chroncile how is car was damaged after it was grounded on the drive of his newly-built home in Birtley. He said: “The car sustained damage to the suspension and the sills. The site manager had to help me get the car off the drive. I am still waiting for Persimmon to pay the £1,800 damage several weeks after the damage occurred. I passed the complaint to John Eynon who assured me a cheque would be put in the post.”

John Eynon stated:  “The drive is constructed to NHBC standards and passed by them for building control purposes. The issue related to finishing the top surface, which does not go down immediately, and as such it did cause a problem for this particular vehicle. However, we carried out some works immediately to ensure it does not happen again. This issue needed to go through the insurance company and I understand they have spoken to the customers to advise them the cheque is on the way.”

Again compliance with NHBC standards and/or Building Control is of no consequence. The drive was not “fit for purpose” causing damage to the buyer’s car. Furthermore, non-payment for repairs to the car because Persimmon wanted to claim it on their insurance is not a valid reason for the delay.  Persimmon is a large enough company to have paid the repair costs themselves in a matter of days. Whether or not Persimmon Homes later decide to make a claim on their insurance is up to them.

This entry was posted in Persimmon and tagged customer care, persimmon. Bookmark the permalink.