The wait is over the results are in, and the winner is……
the new homebuyer!

After what has seemed an eternity and without any explanation for the nine-month delay, the Government published its response to the ‘Strengthening consumer redress in the housing market’ consultation on 24 January 2019, which had closed 283 days  earlier! As I mentioned in my last article about government dragging its heels on housing reform, uploaded 10 days before this consultation response was made public, MHCLG minister Heather Wheeler stated in a letter to my MP on 1st October 2018, “access to redress is a priority for this government.”

Whilst the government consultation response relates to redress in all housing sectors, I will restrict my comment and subsequent observations to the government’s “reiterated commitment to establishing a New Homes Ombudsman which will champion home buyers, protect their interests and hold developers to account.” as previously announced by James Brokenshire on 1st October 2018.

Disappointingly, just 1,209 responses were received for this consultation, only 355 (34%) from those having bought a new home and 385 (37%) from leaseholders. ‘Industry and organisations’ returned 172 (14%) responses. The consultation “Overcoming the barriers to longer tenancies in the private rented sector” which closed on 26 August 2018, received over 8,700 responses! Are new homebuyers uninterested in having someone fight their corner?  “holding developers to account”  Nevertheless, I would like to acknowledge and thank the few who did participate on behalf of many thousands of new homebuyers with defective new homes and thank Katie Kendrick of the National Leasehold Campaign who encouraged members of her group to also respond. 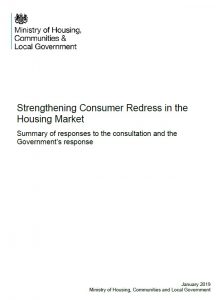 In the government housing redress consultation, just 12 people (7%) indicated that had made a complaint using the Consumer Code for Home Builders (CCHB) IDRS in the last FIVE YEARS! Some respondents said their complaints had been considered as ‘out of scope’ – a common phrase used in the CCHB Case Summaries!  A Government inquiry report in July 2016 also concluded the CCHB was “limited in its scope”.

Out of the 167 individuals who rated the service they received from a redress scheme in Q7, 40% were made by those who recently bought a new home and 35% from leaseholders. These two categories made up the majority (79%) of those who said they had received a ‘very poor’ service. In addition, 42% of purchasers of new homes said “yes, they had encountered gaps in current redress schemes.”

The majority of respondents (84%) who replied to Q20, stated that an ombudsman scheme for new homes should be statutory.

Nearly all, 91%, of the new homebuyers that responded said “that a redress scheme should publish decisions and the number of complaints relating to different providers should be made public.”

The response to Q30 regarding a single ombudsman or one for each sector was not disclosed. Nevertheless it is clear that the majority of new homebuyers want a stand-alone, independent statutory new homes ombudsman and this is what the government have pledged to create.

So what was the Government response to this Consultation as far as the New Homes Ombudsman is concerned.  I will endeavour to interpret the ambiguity in my next article: 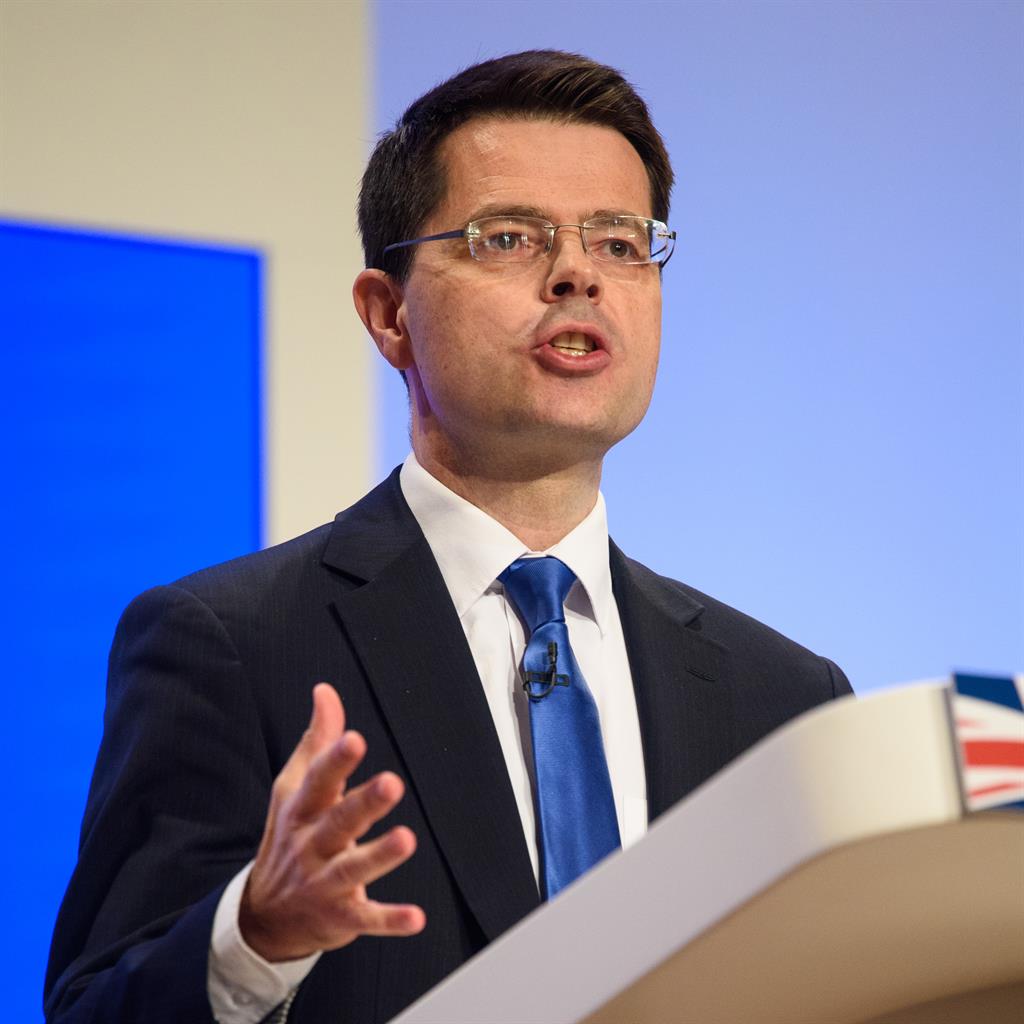 “And to protect the interests of home-owners who buy new build homes, government has also reiterated its commitment to establishing a New Homes Ombudsman which will champion homebuyers, protect their interests and hold developers to account.

Legislation will be brought forward at the earliest possible opportunity to require all new developers to belong to the Ombudsman – giving homebuyers the confidence that when they get the keys to a new home they are getting the quality of build they expect.

Developers will also have to belong to the new body by 2021 if they wish to participate in the government’s landmark Help to Buy scheme.

First, I want to help plug the gaps in available redress services so that more people can get their housing disputes resolved without going through the courts. To that end, I am proposing a New Homes Ombudsman, underpinned by legislation following the establishment of an interim voluntary service, and requiring developers of new build homes to participate.

I want to see a single “Code of Practice” on complaint handling across all tenures.”

Our aim is to provide a single point of access for all the current schemes in housing. We intend to develop this in collaboration with the redress sector, initially on a voluntary basis, but we will keep open the option of legislation to make this mandatory if necessary.

Our ambition ultimately is for the new service to cover all housing consumers including tenants and leaseholders of social and private rented housing as well as purchasers of new build homes and users of all residential property agents.

We propose to establish a Redress Reform Working Group with redress schemes, which will work with industry and consumers on developing the new service and the other options set out in this paper…”

Addressing the gaps “proposing legislation to extend mandatory membership of a redress scheme to:  c. developers of new build homes.

The government announced the proposal to create a New Homes Ombudsman service in October 2018. This response indicates how that service will sit in the wider redress landscape and the next steps of its implementation.

First, I want to help plug the gaps in available redress services so that more people can get their housing disputes resolved without going through the courts. To that end, I am proposing a New Homes Ombudsman, underpinned by legislation following the establishment of an interim voluntary service, and requiring developers of new build homes to participate. I will also bring forward legislation to require all private landlords, including private providers of purpose-built student housing, and park home site operators to belong to a redress scheme.

On 1st October 2018 we announced our commitment for a New Homes Ombudsman to protect the rights of buyers of new build homes. These commitments are part of the Government’s drive to close gaps in existing redress services and ensure that all housing consumers have access to redress when things go wrong. This consultation response provides more detail on the implementation of these measures.

We propose to bring forward legislation to underpin a New Homes Ombudsman in statute and we will work with industry and consumers prior to legislation so purchasers of new build homes have access to better redress now.

In the meantime, we will work with industry, warranty providers and consumers to ensure that the distinct practices for the new build sector are addressed and that these are reflected in an agreed single consumer code of practice which would be used by a New Homes Ombudsman to adjudicate against.

99. It is clear from the responses that more needs to be done to strengthen consumer redress in relation to new build homes, and to drive up standards across the industry. The need for an easy, effective and independent body for consumers to go to is evident, and supported by the industry. A significant minority of respondents said that there is no current existing redress scheme which is best placed to deliver an ombudsman scheme for purchasers of new build homes.
100. There was very strong support in favour of purchasers of new build homes having access to an ombudsman scheme, and many respondents were in favour of such an ombudsman being statutory. We consider that the fastest way to improve redress is to work with industry and consumers to implement a better redress scheme for purchasers of new build housing as soon as possible.
101. We have announced proposals to ensure that a New Homes Ombudsman is established, working with industry and others. We will look to strengthen protection for the first two years after purchase when the majority of problems occur and minimise the variance in the levels of protection and schemes that are currently available. To ensure that consumers get the protection they deserve, we will introduce legislation to require developers of new build homes to belong to a New Homes Ombudsman, which will be underpinned in statute.
102. It is proposed that the New Homes Ombudsman would charge developers to ensure that the service is free of charge to buyers of new build homes.
103. Developers work across all nations of the UK. As the proposed legislation includes devolved matters, we will continue to engage and consult the devolved administrations to seek agreement to introduce UK-wide legislation.
104. We will consult on the detail of the proposed legislation to statutorily underpin a New Homes Ombudsman. This will include the approval mechanisms and standards that a New Homes Ombudsman must meet as well as whether a Code of Practice for developers should also be underpinned in legislation.
105. As we introduce statutory arrangements, we will work closely with industry and consumer groups to establish a voluntary New Homes Ombudsman ahead of legislation. We expect this ombudsman to be:
• Free to the consumer and funded by industry;
• Independent from the organisations the ombudsman will investigate;
• Fair in dealing with disputes;
•Open and transparent and have public accountability through regular reporting;
• And have effective powers to hold developers to account.
106. At Budget 2018, we announced that a new Help to Buy Equity Loan scheme will run for 2 years from April 2021 before closing in March 2023. We will establish the condition that housing developers must belong to a New Homes Ombudsman to participate in the new Help to Buy Scheme.
107. Although there are benefits to having competing redress providers as set out in the section on the Private Rented Sector which has an established redress system, it is clear that the number of schemes operating in the new build sector has created an unacceptable variance of standards and, as we have an opportunity to establish a new system without disruption to consumers and there is a need to reform all the existing schemes, we believe a single New Homes Ombudsman could solve these issues without unnecessary disruption. Our consultation will consider whether one or more organisations could provide a quality service to consumers under the principles above.”