Before 2011, the star rating of  housebuilder’s was also based on the question: “Taking everything into account, overall how satisfied or dissatisfied are you with the quality of your home?”  over the last three years the star rating awarded to housebuilders is derived from the responses to just one Yes or No survey question:“Would you recommend your builder to a friend?”

Of the bigger housebuilders only Barratt, Redrow, McCarthy and Stone and Miller maintained their 5 star rating from last year.  Taylor Wimpey, Bellway, Bloor, Crest, and Churchill Retirement Living, all lost their five star rating. Persimmon, Bovis and Avant also lost a star and are now the only housebuilders rated just 3 stars in the latest HBF National New Home Customer Satisfaction Survey.  Just how bad are their new homes?

So why are standards getting worse and who is to blame? 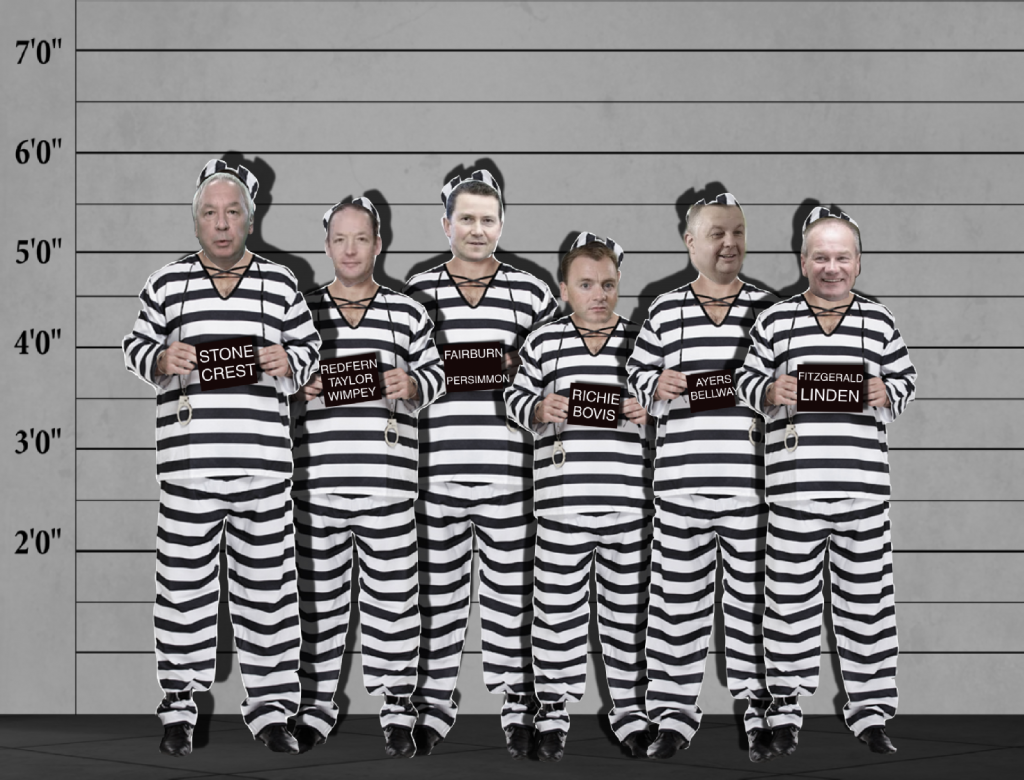 These men are all guilty – guilty of building and handing over new homes late, not fully completed, with defects and failing to provide the required level of customer care to ensure that all their buyer’s problems are rectified quickly and effectively. Britain’s least wanted! – Lacking in star quality?  They may have stars in their eyes but now have fewer on their site flags!

These CEOs have all presided over a fall in customer satisfaction levels in 2014, with not one of their companies attaining five star status. Two are now rated just 3 stars in the latest Home Builders Federation (HBF) “National new home customer satisfaction survey” results. They are fully aware that their companies are failing to improve both the quality of the homes they build and the service to their customers, despite these often being stated as important in their company reports. Together, their companies built around a third of Britain’s new homes in 2014 and their customers are not happy!

Crest CEO Stephen Stone said in the company’s annual report:
“Every customer expects their new home to be built well, finished to the highest quality and delivered free of defects. These are equal priorities for the business too and the focus on increasing housing supply must not divert from the challenge of improving construction standards, driving quality through our product and providing high levels of customer care.” Talk is cheap. Stone anticipated his company would lose their 5 star status saying: “negative feedback from completion delays due to inclement weather and shortages in the supply chain.”   – If all else fails, blame the weather!

Having only just scraped into the five star rating in 2013, Peter Redfern CEO of Taylor Wimpey said in his company report:
“In 2014 we achieved a customer satisfaction rate of 87% (2013: 90%), with the decrease reflecting the challenge to deliver our homes on time as the labour market adapted to the better sales market.”
In other words increasing the number of sales is more important than improving or at least maintaining quality. Taylor Wimpey could have took longer to build fewer new homes, better. The level and effectiveness of a housebuilder’s customer service is also unrelated to variations in market demand – it is policy.

Bellway said in its financial report that:
“Customers satisfaction is important to us as this can ultimately determine the success or otherwise of our business. We aim to deliver a positive sales experience to our customers, both before and following acquisition, building upon our reputation as a quality national housebuilder.”
Yet it is surprising that Bellway’s “principal” key performance indicators (KPI) are all financially driven. Not one KPI is with regard to customer satisfaction or quality. Hardly surprising Bellway also lost a star.

“Five Star Home Builder Satisfaction”
Even those rated five stars should not become complacent. The star rating is based on the percentage of Yes votes a housebuilder receives in the survey to this single question:  “Would you recommend your builder to a friend  – Yes or No”
Three stars for 70% and above, 80% or higher 4 stars and above 90% the coveted 5 star rating. This one question can hardly be regarded as an in depth, detailed, sophisticated analysis of a new homebuyer’s level of satisfaction. At best this is a somewhat vague and subjective question which neither of the definitive answers available is particularly suitable. It is human nature (and especially British) to answer favourably when presented with a yes/no option, even if not fully deserved especially if a “no” is not fully deserved either. People are naturally more reluctant to unfairly criticise than they are to offer an unwarranted endorsement. Would the results of all the survey questions be more accurate and paint a bleaker picture of UK housebuilding if they were all “on a scale of 1 to 10” rather than a Yes/No or very satisfied/fairly satisfied/neither/fairly dissatisfied/very dissatisfied options?  You bet they would.

In isolation, there can be no direct correlation between a “yes” answer to this single question and the implications of a high quality endorsement of new homes built by a particular house builder or the customer satisfaction levels that the star rating is used to promote.

Whilst better than nothing, do not take the HBF housebuilder’s star rating as an endorsement of either quality or service.