New Homes Ombudsman should be set up – An APPG Inquiry Recommendation

In his speech at the JCT Parliamentary Reception on 17 May 2016, APPG EBE chair Oliver Colvile MP highlighted the main findings of the Inquiry and some of the main recommendations, in particular that a New Homes Ombudsman “should be set up.” stating “this would mediate disputes between consumers and their builders or warranty providers to offer a quick resolution.”

It is to be hoped that this and all the recommendations in the Inquiry Report, due for publication at the beginning of June 2016, will be taken forward and fully implemented by Government at the earliest possible opportunity.

An Ombudsman is usually appointed by the government or by parliament, but with a significant degree of independence. They are charged with representing the interests of the public investigating and addressing complaints against public bodies, private companies, organisations and sometimes entire industries. An ombudsman should be a totally independent body capable of investigating complaints of malpractice, maladministration or a violation of rights, both fairly and impartially.

END_OF_DOCUMENT_TOKEN_TO_BE_REPLACED

The waiting is nearly over.   Its official!  The New Home Ombudsman is coming! A culmination of two years’ campaigning and ten years dedicated work highlighting the plight of UK new homebuyers.

I spoke. They listened!

The APPG Inquiry report is being finalised and is due for publication in “at the beginning of June 2016.”

On Tuesday 17 May 2016, chair Oliver Colvile MP made a speech at the JCT Parliamentary Reception highlighting the findings and the main recommendations.

He said that he, and “many of his Parliamentary colleagues across the country have had new homebuyers coming to their MP’s surgeries to complain about the way their new home was built. Although the report hasn’t been finalised, I can confirm that the Inquiry Committee has agreed on a number of recommendations and I would like to share a few of those with you”

END_OF_DOCUMENT_TOKEN_TO_BE_REPLACED

Persimmon counter claim against their buyer for £8,000 for the cost of repairing his house!

Posted on 09/05/2016 by New Home Expert | Comments Off on Persimmon counter claim against their buyer for £8,000 for the cost of repairing his house!

Persimmon Homes, rated just three stars by their own customers in the industry’s  “satisfaction survey,” appear go out of their way to be confrontational and intransigent to any customers who take issue with the builder. The phrase “the Customer is always right” isnt even on their radar if this story from the North East Evening Chronicle is anything to go by. 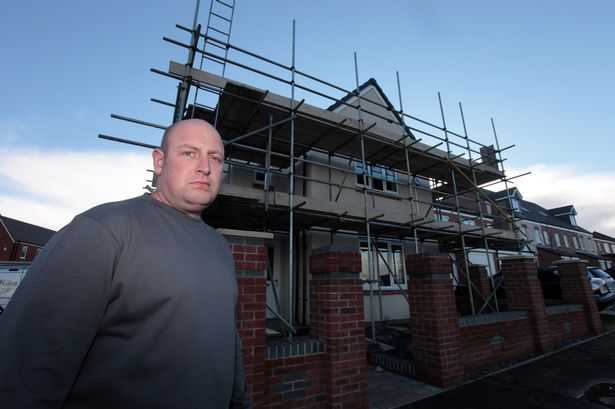 An unhappy Vince Wareham outside his Persimmon new home at Alexander Park in Sunderland.

New homebuyer Vince Wareham told the Chronicle about his shock when he learned Persimmon were taking legal action against him in an £8,000 counter claim, after he decided to take the house builder to court, claiming £2,950 in compensation for remedial works carried out on his new home.

END_OF_DOCUMENT_TOKEN_TO_BE_REPLACED

Comments Off on Persimmon counter claim against their buyer for £8,000 for the cost of repairing his house!

No Regulator or Ombudsman for complaints about house builders

It is not just house building that has dissatisfied customers. However,  most other industries have an Ombudsman and official Regulator.

If you bought a new home in the last ten years, the following statements will have a familiar ring to them. After all, the house building industry has a dreadful reputation for both quality and customer service, yet makes every effort to smokescreen and spin the opposite.

END_OF_DOCUMENT_TOKEN_TO_BE_REPLACED

Have Persimmon Tried To Buy A Better HBF Star Rating?

Posted on 18/04/2016 by New Home Expert | Comments Off on Have Persimmon Tried To Buy A Better HBF Star Rating?

The HBF National new home customer satisfaction survey is now in its eleventh year. The house builder star ratings (awarded by the HBF) “are allocated according to the proportion responding Yes..” to Question 1 of the survey: “Would you recommend your builder to a friend?…. Yes or No”    The more that respond “Yes”, the better the builder’s star rating.

During research for a previous article concerning claims made by the HBF in the 2016 survey results, I considered the possibility that builders’ sales and site management may be influencing their buyers to respond more favourably in the NHBC 8-week survey. After enquiring on social media, buyers from Britain’s two largest house builders, Persimmon and Barratt, who together built over 31,000 new homes last year, publicly expressed their opinions and claims: 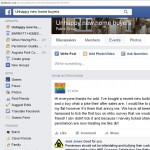 JP (16 October 2015) said: “I’ve bought a recent new build from Persimmon and o boy what a joke their after sales are. I would like to point out I love my flat it’s them that annoy me. We have all been bullied and harassed to tick the first box on the NHBC survey that we would recommend a friend. Obviously didn’t tick it and because I naively ticked share my opinions Persimmon are now treating me like dirt……They were ringing us Saturday and Sunday and I quote “If I do you a favour now, you can do me a favour and tick the first box” They didn’t give a **** about our problems just whether we had said yes or no.”

END_OF_DOCUMENT_TOKEN_TO_BE_REPLACED

Comments Off on Have Persimmon Tried To Buy A Better HBF Star Rating?

The waiting is over. The results are in,  and the winner is……. well pretty much the whole house building industry if you believe the accompanying Home Builders Federation (HBF) editorial headlined “Homeowner satisfaction with new homes remains high.”

The HBF use the same phrases every year, irrespective of the survey results to market new homes. Why else would the HBF list on the front page their “key benefits of new homes” for the last four years, including the claim that “new homes are built to a higher standard than ever before and the customer satisfaction survey results reflect this” – well not over the last three years they don’t! Since 2013, the key satisfaction questions have provided results that show a marked decline from 91% in 2013 to 85% in 2016! 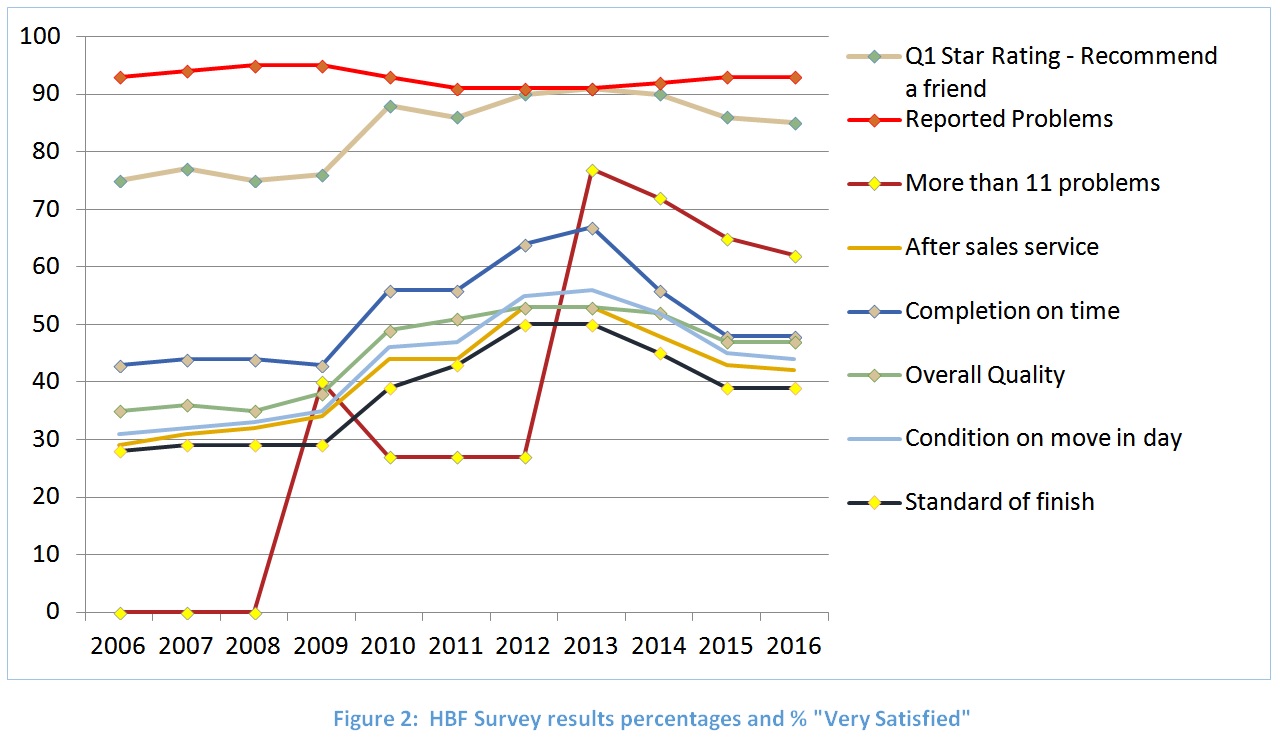 END_OF_DOCUMENT_TOKEN_TO_BE_REPLACED

Comments Off on Barratt withdraw its unique five-year warranty

The Consumer Code For Home Builders Is Failing New Homebuyers

Close examination of the 2015 published case studies for Consumer Code for Home Builders Adjudication Scheme (CCHBAS) shows exactly what is wrong with the house building industry. It is now time for a New Homes Ombudsman to independently deal with homebuyers complaints and award justifiable and fair levels of compensation. At present, the maximum new homebuyers can claim using the CCHBAS is £15,000. The maximum compensation for “inconvenience” is just £250 – this being all that was awarded to a quarter (27%) of the successful claimants in 2015.

A total of 47 complaints made by new homebuyers were adjudicated in 2015. Of these, 41 were successful or successful ‘in part’ due to a total of 110 violations over 17 different Code requirements. Only one Code requirement (3.4) was not mentioned in any of the case studies.

END_OF_DOCUMENT_TOKEN_TO_BE_REPLACED

HBF mislead the public with misinformation, spin and ignorance on BBC Radio 4 “You and Yours”

Posted on 08/03/2016 by New Home Expert | Comments Off on HBF mislead the public with misinformation, spin and ignorance on BBC Radio 4 “You and Yours”

“There are lies damned lies and statistics”…Mark Twain

A spokesman for the Home Builders Federation (HBF) made some exaggerated, misleading and  untrue statements regarding homebuyers’ satisfaction and protection when interviewed for the BBC Radio 4 “You and Yours” programme on new-build homes aired on 2 March 2016. These merit detailed clarification and rebuttle.

The BBC reporter said that “the house building industry says that only around 1% of complaints are around serious issues, structural faults for example and that generally standards are very high.”  Even if true, it would still indicate that out of the 143,560 new homes built in 2015, “around” 1,435 will have structural faults that cannot be “guaranteed” not to crack, creak, crumble or fall down, requiring major remedial works. Often this means the new homeowner has to move into temporary accommodation as is the case with Evelyn Lallo who has been in ‘temporary’ accommodation since June last year whilst Taylor Wimpey carry out extensive remedial structural work.

END_OF_DOCUMENT_TOKEN_TO_BE_REPLACED

Comments Off on HBF mislead the public with misinformation, spin and ignorance on BBC Radio 4 “You and Yours”